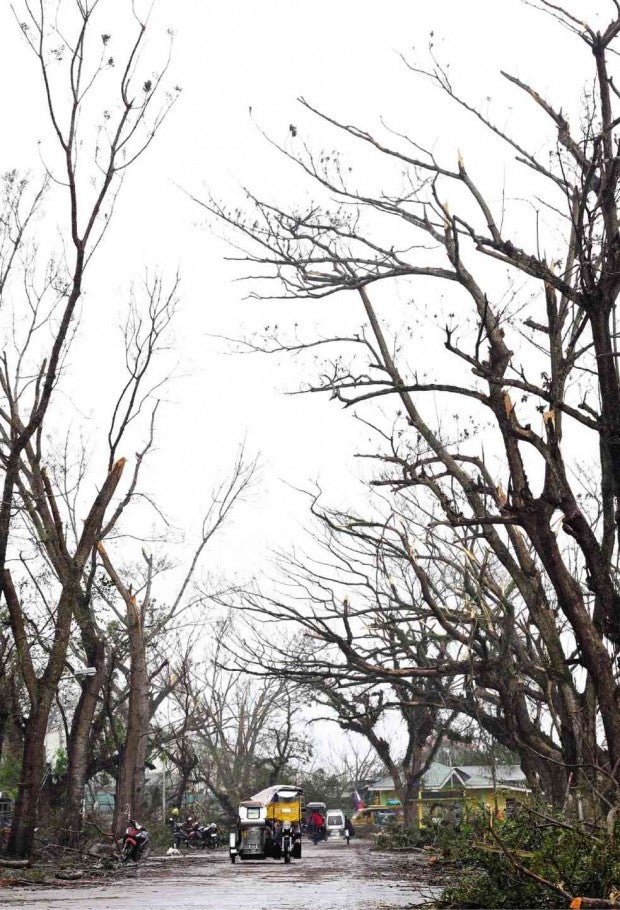 TREES are barely left standing after Typhoon “Nona” struck the town of Pinamalayan in Oriental Mindoro, one of the areas hardest hit by the storm. INQUIRER PHOTO

CALAPAN CITY—Health authorities in the province of Mindoro have warned residents against leptospirosis after documenting four deaths believed to be caused by the disease, which is usually contracted through contact by open wounds with water contaminated by the urine of rats and other animals.

Dr. Marfeo Marasigan, Oriental Mindoro Provincial Hospital (OMPH) chief, said three of the deaths were from Baco town, where mud as thick as an inch covered roads after a flashflood that inundated the town at the height of Typhoon “Nona” on Dec. 15.

The fourth fatality was a resident of San Jose, Occidental Mindoro, but caught the disease in the town of Socorro, Oriental Mindoro province.

According to the Department of Health (DOH), leptospirosis is a “bacterial infection transmitted by many animals, such as rodents and other vermin, through their waste products (e.g. urine and feces) that contaminate soil, water and vegetation.”

Since Nona struck, at least 23 persons with leptospirosis were admitted and treated at OMPH and three private hospitals in the province, Marasigan said on Monday.

He said 16 of the cases were from Baco town, one of the towns in Oriental Mindoro that took the brunt of Nona.

Baco was submerged in calf-to-knee deep water for days, resulting in an increase in cases of athlete’s foot among residents, Mayor Rey Marco earlier said.

When the skies cleared, Baco became enveloped in dust, prompting many residents to wear masks.

Marasigan advised people to have a checkup if they suffer from fever and as a precautionary measure.

He said medicines have been distributed by DOH staff to residents in evacuation centers to prevent the spread of leptospirosis.

At least 14,000 people are still in 60 evacuation centers in the province.

Mira Leuterio, a team leader of the Department of Social Welfare and Development (DSWD) office in the province, said DSWD workers have been conducting debriefing sessions with children traumatized by Nona.