Carpio urged to inhibit self in DQ cases against Poe 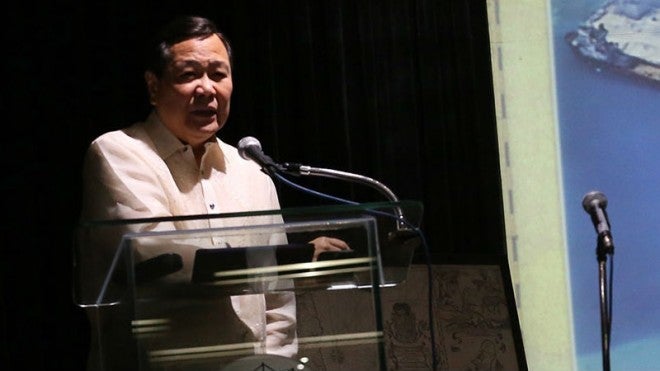 PRACTICE what you preach, professor.

Former law dean Abraham Espejo Wednesday issued this challenge to his former professor, Senior Associate Justice Antonio Carpio of the Supreme Court, as he joined calls for the magistrate to inhibit himself from deliberations on the disqualification cases against presidential aspirant Sen. Grace Poe.

In an interview, Espejo said Carpio’s close ties with the man accused of forging documents to derail the presidential bid of Poe’s adoptive father, the late action star Fernando Poe Jr., popularly known as FPJ, in the 2004 elections should prompt him to steer clear of the petitions brought against her.

“He always taught us to be ethical and to take the moral high ground as lawyers,” said Espejo, one of Carpio’s students in the University of the Philippines (UP) College of Law.

“I’m pleading and begging Justice Carpio, my former professor in UP, to take the moral high ground and inhibit from any discussion about the citizenship of Sen. Grace Poe because he has given his position on this issue,” said Espejo, a former law dean of San Sebastian College and New Era University.

Carpio, who chairs the Senate Electoral Tribunal (SET), voted, along with two members of the Supreme Court, in favor of a petition seeking to void Poe’s win in the 2013 midterm senatorial election for not being a natural-born citizen.

However, the SET voted 5-4 to dismiss the petition. Rizalito David, who lost in the 2013 senatorial election, appealed the SET decision in the Supreme Court.

“I don’t think it’s right for (Carpio) to review a decision which he himself made. It’s very rare for somebody to overturn a decision you yourself made,” Espejo argued.

“This is no longer just a question of law. The question, ‘Will I be suspected of using my influence to (affect) the Supreme Court’s decision?’ I believe that at the end of the day, it’s the people who should decide this,” he added.

“The people should not be deprived of their choice of leaders. Senator Poe was voted as senator by more than 20 million Filipinos in 2013. We should not disregard that.”

Poe filed petitions in the Supreme Court last month to prevent Justices Carpio, Teresita Leonardo-De Castro and Arturo Brion from participating in the tribunal’s deliberation on her plea to reverse the rulings of the Commission on Elections disqualifying her from the presidential race for not being a natural-born Filipino and for not meeting the 10-year residency requirement for candidates.

In seeking the three justices’ inhibition, Poe cited their dissent to the SET ruling that deemed her to be a natural-born Filipino.

On Tuesday, the three justices, despite Poe’s plea for their inhibition, voted against the temporary restraining orders (TROs) that Chief Justice Maria Sereno issued last Dec. 28 to stop the presidential candidate’s disqualification. However, 13 other justices affirmed the TROs, allowing Poe’s name to remain on the ballot as a candidate for President.

Espejo noted that retired Brig. Gen. Jose Almonte, the national security adviser during the Ramos administration, had revealed the close relationship between Carpio and the late National Archives Director Ricardo Manapat in his book “Endless Journey: A Memoir,” which was released last year.

Manapat, who died in 2008, was invited to the Senate inquiry in 2004 after he was tagged the one behind the supposed alteration on FPJ’s birth certificate and the marriage certificate of the actor’s parents to make it appear that he was an American citizen.

The move was supposedly intended to prevent the “King of Philippine Movies” from contesting the presidency against then President Gloria Macapagal-Arroyo in the May 2004 general elections.

“It’s in  Almonte’s book. I think you better read it,” Espejo said.

In the book, written by veteran journalist Marites Danguilan-Vitug, Almonte said Carpio introduced him to Manapat in 1992 while the Ramos administration was mapping out a strategy to end the monopoly of Philippine Long Distance Telephone Co. (PLDT), then headed by businessman Antonio “Tony Boy” Cojuangco.

The former national security adviser described Manapat as “a scholar and activist” and “a great patriot” whose best-selling book, “Some Are Smarter Than Others,” chronicled crony capitalism during the Marcos dictatorship.

“Tony Carpio introduced me to Ric (Manapat). I would later learn from Tony how he got to know Ric,” Almonte narrated on page 241 of the book.

He said he and Carpio, then Ramos’ legal adviser, sought Manapat’s help to counter the media attacks supposedly mounted by the Cojuangco-led PLDT against the Ramos administration.

In a message published in the book, Carpio said Almonte’s book was “remarkably truthful” and that it showed Almonte “passionately doing what is right for our country even though the heavens fall.”

During the Senate inquiry in 2004, one of Manapat’s subordinates claimed the late national archives chief had instructed him to deliver to Carpio’s office in the Supreme Court an envelope containing the fabricated documents about FPJ’s identity.

In March of that year, Carpio joined four magistrates of the high court in ruling that FPJ was not a natural-born Filipino. But they were outvoted by eight of their colleagues who dismissed the question of FPJ’s citizenship.

Asked for Carpio’s comment, Supreme Court spokesperson Theodore said that as a general rule, justices do not comment on extrajudicial statements issued by non-parties on pending cases.

Te also cited Rule 8, Section 2 of the Supreme Court internal rules that says any call for inhibition “must be in writing and under oath and shall state the grounds therefore.”

He likewise expressed “discomfort at responding to a statement that would “otherwise be not worth reporting.” With a report from Tarra Quismundo