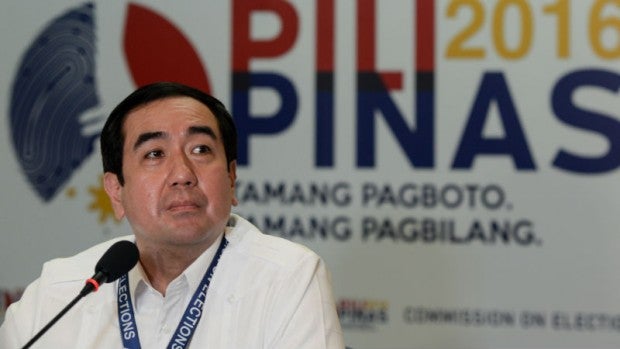 THE TWO feuding members of the Commission on Elections (Comelec) skipped exchanging dramatic barbs to beat the deadline in lodging another comment in the Supreme Court on Sen. Grace Poe’s second pleading to reverse the poll body’s ruling to disqualify her from the presidential race in May.

Comelec Chair Andres Bautista said the comment concerning the Second Division’s decision was sent Monday afternoon following an en banc session that allowed all commissioners to give their opinions and affix their signatures to the document.

“The [draft] comment was circulated by Commissioner Arthur Lim to the members of the en banc, we were given an opportunity to read [it] and [provide comments],” Bautista later told reporters.

But as to the comment filed by Election Commissioner Rowena Guanzon on Thursday in the high court, Bautista said the full commission would be dealing with the issue in another en banc session today.

Bautista had claimed that Guanzon docketed the comment without clearance from him or the full commission.

On Friday, the Comelec chief issued a memorandum directing Guanzon and Maria Norina Tangaro-Casingal, director of the Comelec’s law department, to explain within 24 hours “under whose authority” Thursday’s comment was filed.

Guanzon fired back, insisting that only the full commission, not Bautista, can say that the comment she filed was “unauthorized.”

But Bautista and Guanzon’s first meeting Monday at the en banc session on the heels of the controversial filing of the comment on Thursday was unexpectedly devoid of angry confrontation.

“It was a very cordial [meeting]. There was a lot of give and take of their opinions… . That’s what we saw this morning. There was a lot of mutual respect about the varying opinions and eventually they came up with a document that they are all happy with,” said Comelec spokesperson James Jimenez.

In a press briefing, Jimenez said all seven commissioners, including Bautista, signed the comment on Poe’s pleadings in relation to the poll body’s Second Division ruling after giving their respective opinions on the matter.

He also said Guanzon’s comment was touched on very briefly since the full commission gave priority to craft the other comment that needed to be docketed at the high court before Jan. 12.

“The top agenda of the en banc meeting today (Monday) was to draft a comment that will be agreed upon by all the seven commissioners,” Jimenez said.

In a separate interview, Bautista said the full commission would try to clarify the protocol in filing pleadings and documents with the Supreme Court during today’s en banc session.

“Meanwhile, I also want to say that projecting the Comelec in disarray is not accurate. We are just having a misunderstanding on the process of filing of pleadings that’s why we want it clarified in the en banc meeting tomorrow (Tuesday),” he added.

The Comelec chief also explained that during their Jan. 5 en banc meeting, after the Office of the Solicitor General declined to represent the poll body in the Supreme Court, Guanzon was tasked to draft a comment for the First Division ruling and Lim for the Second Division decision.

However, the commissioner did not circulate the draft comment. Bautista said the en banc was open to releasing documents, such as the minutes of the meeting, and the audio recordings of the Jan. 5 en banc session if called for.

In an ambush interview with reporters, Guanzon expressed confidence that the issue would be settled soon and that “all will be well with the Comelec.”

“I’m very positive that this issue will be settled once and for all,” she said.

She also insinuated that Bautista was biased for Poe: “Bautista three times met the commissioners to insist we consolidate all Grace Poe cases. He voted in her favor. Grace Poe lost. He delayed the issuance of the resolution until Dec. 23.”

Guanzon also challenged Escudero to lawyer for Poe and prepare for a face-off at the Supreme Court.

“If you are such a good lawyer, why don’t you lawyer for Grace Poe? See you in the SC,” she said, apparently in reply to Escudero’s calling her a “threat to democracy.”

Speaker Feliciano Belmonte Jr. and other House members are urging the Comelec to stop fighting in public and resolve their differences in-house to preserve the poll watchdog’s impartiality at a crucial point in the election season.

“I suggest that they should get together and get their act together,” Belmonte said.

ACT Teachers Rep. Antonio Tinio said Bautista and Guanzon should settle their differences internally because their public bickering was not doing the Comelec any good.

“If they continue this, the Comelec’s capacity to administer the elections in a nonpartisan manner will be further eroded,” Tinio said.

Ako Bicol Rep. Rodel Batocabe said that while it was not unusual for a collegial body to have disagreements, the Comelec officials should know better than to wash their dirty linen in public.

“Should this controversy persist, so much so that the credibility and reputation of the Comelec will be extremely prejudiced, then that is the only time we can discern who among the commissioners should be culpable for impeachment,” Batocabe said. With a report from Gil C. Cabacungan