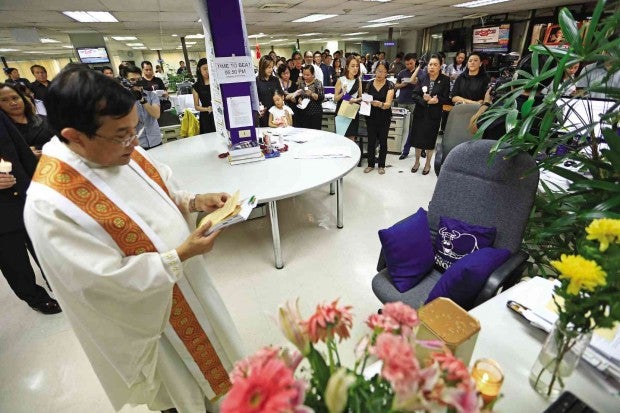 FINAL BLESSING Fr. Rey Reyes reads a prayer to bless the work table of Inquirer editor in chief Letty Jimenez-Magsanoc after a memorial Mass on Thursday at the newsroom where she held sway for 25 years.

SHE would have cringed at all the attention, this editor who always reminded writers to keep themselves out of their stories.

But Letty Jimenez-Magsanoc’s Inquirer family couldn’t help it, as they bade the late editor in chief a final goodbye with a memorial Mass on Thursday. LJM, as her staff and colleagues remember her, died on Christmas Eve. She was 74.

Magsanoc’s family brought the urn containing the editor’s ashes to the newsroom she had led for 25 years, where Inquirer officials and staff lighted candles, offered prayers and privately said their goodbyes to the deceased.

Following the Mass cocelebrated by Fr. Rey Reyes and Fr. Tito Caluag, Magsanoc’s only daughter, broadcast journalist Kara Magsanoc-Alikpala, described their visit to the paper as “very sentimental,” as they had always felt being part of the Inquirer family.

“We grew up seeing your faces,” Alikpala said. “Whenever we come here, it’s a thrill. It’s like entering the Hall of Justice [of the] Justice League because of all the superheroes around. We’re very intimidated and in awe of everyone,” she said, addressing the staff and officers of the Inquirer led by its chair Marixi Rufino-Prieto and president and CEO Sandy Prieto-Romualdez.

Before joining the Inquirer in 1985 and becoming its editor in chief in 1991, Magsanoc was editor of Panorama Magazine but was forced to resign after writing several stories critical of the Marcos regime. She also worked with Inquirer founding chair Eggie Duran-Apostol for the Mr. & Ms. Special Edition, which was considered part of the “mosquito press” for defying press censorship during the martial law years.

Magsanoc led the Inquirer in digging up stories that helped shape the nation’s history, among them reports on corruption during the Estrada administration and more recently, the P10-billion pork barrel scam that led to the arrest of Senators Juan Ponce Enrile, Jinggoy Estrada and Bong Revilla.

It was Magsanoc’s mission to “work for justice and truth,” said Romualdez, who stood by Magsanoc and the editorial team in 1999 when former President Joseph Estrada initiated an advertising boycott against the paper for its reports on controversies hounding his administration.

“We’re lucky to have had (Magsanoc) share that mission through and with the Inquirer,” the paper’s president and CEO said. “Her integrity was really what allowed the Inquirer to be strong,” she added.

At one point, as if to show how Magsanoc had always kept family a priority and close to her heart even at work, Romualdez showed the late editor’s son, Nikko, a printout of an e-mail—brittle and yellow with age—that the young Magsanoc had sent his mom in 1997.  It was on a clipboard placed front and center on a table that also held several of Magsanoc’s awards, among them the Rotary Club of Manila’s Marcelo H. Del Pilar Journalism Award for Print given in 2000.

But Magsanoc’s daughter made sure “to give back the honor” to her mom’s colleagues at the paper. The reason for the success of the newspaper that her mom had led, Alikpala said, was that it was in a “home full of love (which) has the culture of family and faith.”

While Magsanoc died  on Christmas Eve, “she did not ruin our Christmas,” her daughter said.

“The Three Kings gave Jesus frankincense, gold and myrrh. We gave something much better. We gave back my mom,” Alikpala said.

In his homily, Caluag said “the greatest tribute” that people whom Magsanoc had touched can give her was to continue telling the story of “how she gave life to the passions and dreams of the younger writers,” whom she had mentored and inspired.

With only a month before the 30th anniversary of the first Edsa People Power Revolution that toppled the Marcos dictatorship, Caluag said the Inquirer’s tribute to its beloved chief was not only a recognition of her contributions to Philippine journalism but also “a promise that we will not allow the story [of the martial law era] to be forgotten—the story with which she lived for and which she was willing to die for.”

Caluag, who regularly contributes to the Inquirer’s Lifestyle section, challenged those whom Magsanoc had mentored and inspired to “do her honor and great service by making sure that the story is not forgotten.”

As Magsanoc’s urn was carried down the paper’s spiral staircase one last time, her colleagues gave it a send-off befitting her stature in Philippine journalism—with a shower of pink and white petals and the company’s guards honoring her with a snappy salute.

“Thank you for providing a very love-filled, light-filled, exciting, dynamic playground or platform for her to express her faith and love for Jesus Christ,” Alikpala said.

Magsanoc’s urn was carried out of the Inquirer office just as the sun was about to set, a time and scene that the late editor was known to enjoy.

That the final service to remember LJM was held at the Inquirer office “amid the hustle and bustle of an actual deadline” was (something) that “Letty would have liked,” wrote Candy Quimpo-Gourlay of her first editor and mentor on her Facebook account, adding that the grand tribute was something that the low-key editor would have protested.

“But these things are for the living and not for the dead,” Gourlay wrote.