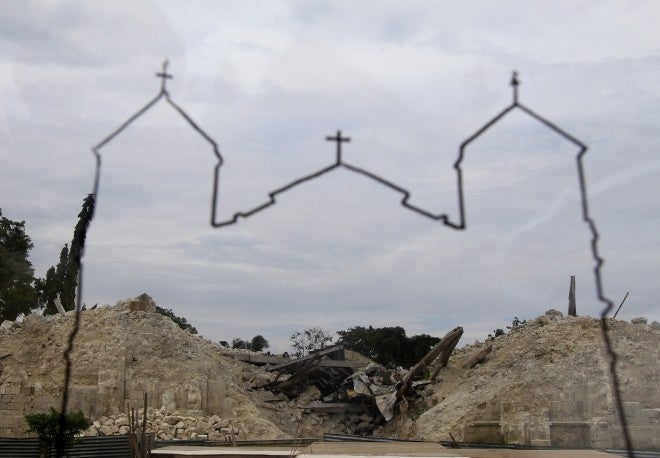 TAGBILARAN CITY, Philippines–Vice President Jejomar C. Binay on Friday criticized the “slow’ rehabilitation and reconstruction effort in Bohol more than two years after the province was devastated by a magnitude 7.2 earthquake.

Binay, who was in the province on a two-day visit, vowed to give priority to the reconstruction of badly damaged areas in Bohol should he be elected President this year.

He cited a report from the Commission on Audit (COA) report that scored the Department of Interior and Local Government (DILG) over the slow implementation of recovery and rehabilitation projects in areas affected by the Bohol earthquake and supertyphoon Yolanda that hit several provinces in the Visayas in 2013.

Binay cited a recent audit report from COA that showed only 12 out of 1,079 rehabilitation projects under the P2.413 billion Bohol Earthquake Assistance (BEA) fund were completed as of Dec. 31, 2014.

In the same report, COA said only 138 out of 323 projects under the P1.778 billion Rehabilitation Assistance on Yolanda (RAY) – Batch 1 were completed by yearend 2014.

Binay was in Bohol to meet with sectoral groups, local leaders and residents in the towns of Loon, Tubigon, Getafe, Buenavista and Talibon. He was scheduled to visit the towns of Bien Unido, Ubay, Pilar and Carmen and Tagbilaran City.

Interior Secretary Mel Senen Sarmiento, however, said that there was a faster rehabilitation in Bohol and Cebu provinces with 551 completed projects by the end of 2015 under BEA.

In a statement, he said DILG hired 34 engineers to assist in the preparation of initial documents particularly for the Local Government Units (LGUs) with many sub projects.

He said the Provincial Project Management Team (PPMT) of Bohol streamlined the review and approval process of initial documents.

At the procurement phase, the LGUs conducted cluster bidding for projects with small amount to encourage contractors. Regular monitoring is also conducted to fast track the project implementation.

Sarmiento said the completion of 551 BEA-DILG projects in 2015 was a giant leap from the 12 completed projects in December 2014. TVJ