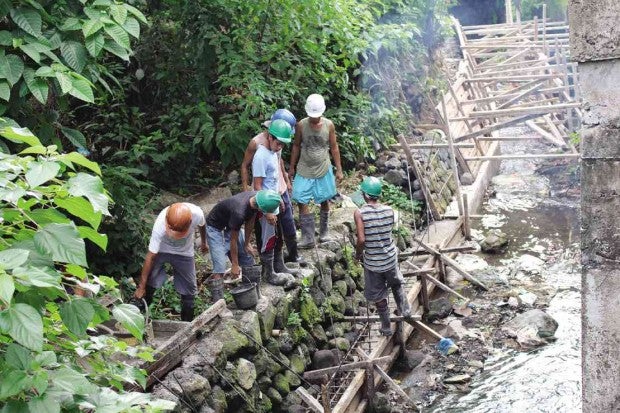 Villagers in three coastal villages of Sto. Domingo town in Albay province volunteer to do labor work in building a dike to keep their communities safe from floods. The project is under the Kalahi-CIDSS program of the Department of Social Welfare and Development. CONTRIBUTED PHOTO

The source of her happiness: There was hardly any flood in her community, which used to be inundated at the slightest rain.

Until then, Barqui had not seen the benefit of the flood control project that she and her neighbors had built.

The new flood control dikes, according to Barqui, were built through volunteerism. They saved hundreds of families living along river channels and shorelines in her village, San Vicente, and its adjoining villages, Padayan and San Raphael.

The dikes stopped water cascading from the slopes of Mayon Volcano from flooding communities in the coastal villages, like what happened when Typhoon “Reming” lashed Bicol in 2006.

“We now feel safe and we can now sleep soundly without fear that floodwaters would sweep our homes during heavy rains and typhoons,” she said.

Memories about Reming still drive Barqui to tears, as she recalled how 54 houses, including hers, were washed away when the rising sea and water cascading from Mayon Volcano merged and inundated entire villages.

It came as no surprise that Barqui became one of 40 residents in her village who volunteered to do work in building a flood control structure supervised by a Department of Social Welfare and Development (DSWD)-appointed engineer.

The dike was one of the projects in Sto. Domingo funded by a P25.9-million grant from DSWD’s community development program under the Kapitbisig Laban sa Kahirapan-Comprehensive and Integrated Delivery of Social Services (Kalahi-CIDSS).

Hundreds of villagers in the three coastal villages of San Vicente, Padayan and San Raphael helped carry out socialized projects that would improve their community and personal well-being, according to Jesseshan Marbella, the regional social marketing officer of DSWD’s Kalahi-CIDSS program for Bicol.

For the flood control project of San Vicente, she said the community received a P1.5-million grant from the program to build a 250-meter flood control structure along the San Vicente River. The construction, by the residents themselves, started in July and was completed just days before Nona struck on Dec. 14.

Bernard de los Santos, who chairs San Vicente’s Barangay Project Management Council (BPMC), said the dike protects 50 households in the village, half of which are beneficiaries of the Pantawid Pamilyang Pilipino Program, a cash assistance program to the country’s poor families.

De los Santos said the 40 who build the dike, 19 of whom were women, were not only paid wages but were also taught how to manage funds downloaded by DSWD directly to the BPMC.

De los Santos said when they started, “it was a bloody process” since they knew nothing about building a dike and many residents were at first apathetic to the bayanihan concept. In the end, however, perseverance paid off, he said.

In Barangay San Raphael, another 200-meter flood control project, built for P1.2 million, was implemented by 40 volunteers from the BPMC, chaired by Leorando Lolamres, 56.

Until then, Lolamres said, flooding was a way of life for residents in his village every time there was a heavy downpour.

San Raphael village chief Jose Maristela said they were not only confronted with rampaging floodwater during stormy weather but also had to contend with boulders that rolled down the slopes of Mayon.

Barangay Padayan, meanwhile, received P458,172 for the repair of a multipurpose center designed for training, conferences and as an exhibit area for livelihood products.

Sto. Domingo Mayor Herbie Aguas said the communities’ attitude was the key to the success in implementing the Kalahi-CIDSS projects.

Sto. Domingo, a picturesque town nestled at the foot of Mayon, overlooks the crystal blue waters of Albay Gulf.

It is tucked between two commercial centers—Legazpi City, 12 kilometers to the south, and Tabaco City, about 14 km to the north.

According to Aguas, the P25.9-million Kalahi grant paid for 26 community projects in the town’s 22 villages. The town would receive P12.9 million more next year and another P12.9 million by 2017, said Marbella.