Fears of more conflicts as Iraq in middle of regional row 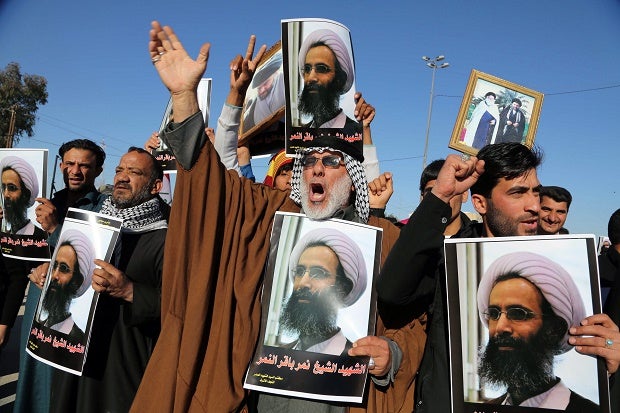 In this Monday, Jan. 4, 2016 file photo, Iraqi Shiite protesters chant slogans against the Saudi government as they hold posters showing Sheikh Nimr al-Nimr, who was executed in Saudi Arabia last week, in Najaf, Iraq. Diplomatic tensions between Saudi Arabia and Iran, which began with the kingdoms execution of al-Nimr and later saw attacks on Saudi diplomatic posts in the Islamic Republic, have seen countries around the world respond. AP File Photo

BAGHDAD, Iraq—Sectarian attacks south of Baghdad have aroused local fears that an escalating row between the region’s Sunni and Shiite powerhouses could plunge Iraq back into all-out civil conflict.

Wedged between Saudi Arabia and Iran, Iraq is the only country to have borders with both of the feuding giants—but analysts say a return to the kind of communal bloodletting that raged a decade ago was unlikely.

On Monday, two Sunni mosques were bombed, a Sunni muezzin and a displaced Sunni man were killed in the Hilla and Iskandariyah areas south of the capital.

The nature and location of the violence was reminiscent of some of the darkest moments of the civil war in Shiite-majority Iraq in 2006 and 2007.

Sunni residents of those areas that are still mixed are particularly fearful that they could pay the price for the abrupt diplomatic flare-up between Iraq’s neighbors.

Ali Hamza, a 27-year-old who lives near one of the two mosques destroyed this week, said “many families are beginning to fear a return of terror, as during the height of the conflict.”

The civil war saw the reign of death squads and horrific communal violence that killed tens of thousands of people and displaced more than four million, reshaping the confessional map of a country in which up to 65 percent of the Muslim population is Shiite.

No group claimed Monday’s attacks, and their link to the execution of Saudi cleric Nimr al-Nimr is not proven, but the authorities moved quickly to call for calm.

“Some people want to create the spark that will reignite war among Iraqis and we must stop them because such acts only serve the enemies of Iraq,” said Mohammed Abdelfattah, a cleric from Hilla’s Al Jazaer neighborhood.

As Iraq fights its war against the Islamic State of Iraq and Syria group that took over swathes of the country in 2014, partners offering their support against the jihadists have already been jockeying for influence on its soil.

Too uneven for war

But analysts believe Iraq is unlikely to slide back into a full sectarian conflict.

Michael Knights, of the Washington Institute, said that because Baghdad is strongly supported by the US, any Saudi attempt to wage proxy warfare in Iraq “would be fighting the US by extension.”

He saw Syria and Yemen as more likely battlegrounds for the Iranian-Saudi rivalry.

Knights said that one of the main reasons preventing a repeat of the mid-2000s bloodshed was also that the war yielded a winner and that much of the cleansing had already been done.

“There has been a lot of sectarian homogenisation of Iraq, reducing the social overlap between sectarian groups and making unrestrained sectarian cleansing less likely,” he said.

“Also the (Shiites) clearly won the civil war and the number of Sunnis willing to fight a losing battle is declining.”

The rise of ISIS two years ago—and of the Shiite militias battling it—has all but suppressed any other form of Sunni power in Iraq, analysts said.

“Moreover, Baghdad has become a Shiite-dominated city, the Iraqi army is in a much better position in mixed Sunni-Shiite areas, and Shiite militias have been brutal, yet effective in preventing a mass Sunni uprising in Shiite areas,” he said.

Iraqi officials even say Baghdad—given its location and diverse foreign partners—could play a part in de-escalating the Iran-Saudi crisis.

According to the official Iranian news agency IRNA, Iraqi Foreign Minister Ibrahim al-Jaafari was due in Tehran Wednesday for talks on the latest developments.

According to media reports, his counterpart from Oman, which has often played a mediating role in the region, was expected in the Iranian capital at the same time.