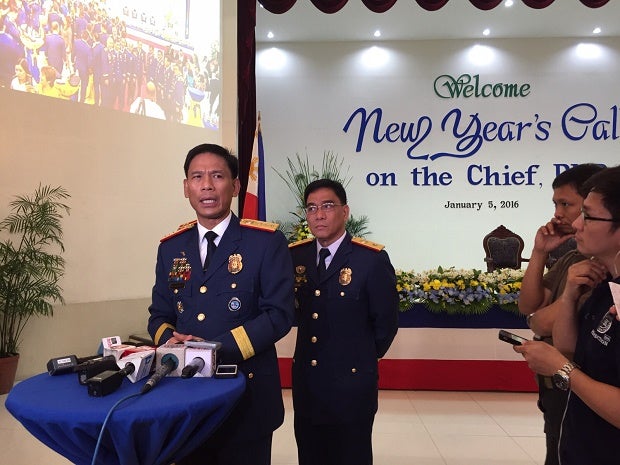 It has been a challenging year for the Philippine National Police (PNP) with the death of its 44 men in a high-risk mission in Mamasapano, Maguindanao against Malaysian terrorist Zulkifli Bin Hir also known as “Marwan” almost a year ago.

However, the father of the 160,000-strong police force encouraged the men and women of the PNP to prove to the nation that they will never be outfought.

“My fellow officers and personnel of the PNP, let us outdo ourselves in 2016, and once again prove to the nation that we are indeed never outfought,” Director General Ricardo Marquez told the ranking officers of the PNP during their New Year’s call on the PNP chief on Tuesday.

In a speech at Camp Crame, Marquez said that although the PNP’s year was “marred with tragedy,” 2015 was also a year of achievements and victories for the PNP.

“It was a year marred with tragedy as we walked in grief over the fate of our fallen SAF (Special Action Force) 44 brothers in Mamasapano, and of our other brothers in uniform who lost their lives while in service to God, country and people. But it was also a year of achievements and victories as our gallant men and women refused defeat and marched on with heads high against crime and lawlessness,” he said.

He lauded the 30,000 uniformed personnel who guarded the Pope’s route in Manila and Tacloban.

“We replicated this feat in the same year as we effectively addressed the security, peace and order, and emergency preparedness requirements of 44 Asia-Pacific Economic Cooperation (APEC) meetings held in nine sites including the APEC Economic Leaders’ Meeting in Manila, and ensuring compliance to the President’s ‘zero incident’ directive,” said Marquez.

PNP was the lead agency of the national security task force for the series of Apec meetings held in Manila last November 2015.

However, as the Papal visit and the Apec ended, the PNP is preparing for another event—the 51st International Eucharistic Congress to be held in Cebu City—where several religious leaders are expected to attend on January 24 to 31.

“We concluded the year successfully as we put in place the security operations for the 51st International Eucharistic Congress in Cebu City. These were achievements that brought to the fore the PNP’s powerful mix of intelligence, operations and police-community relations strategies which ultimately brought honor to the country in the eyes of the international community,” said Marquez.

READ: PNP: Crime in Metro down by 60% since implementation of Oplan Lambat-Sibat

“In 2015, we put in place ‘Oplan Lambat-Sibat’ as a potent weapon against crime and lawlessness, drastically reducing crime incidents in Metro Manila and replicating this in other regions. We effectively addressed the challenge posed by the worsening traffic congestion in the metropolis as we deployed well-trained traffic police personnel in EDSA and other areas. We brought the war against illegal drugs to the barangay (village) level sending a strong signal to drug lords and their cohorts that the police meant business. And we welcomed the establishment of the PNP Anti-Illegal Drugs Group as a national operational support unit, further empowering our fight against the illegal drug menace,” he said.

“We did all these and more, even as we continued to train and educate our personnel to empower them better, and equip our police units to enhance and strengthen their move, shoot, communicate and investigate capabilities,” said Marquez.

The PNP chief also urged the command group, the directorial staff and the leaders of national support units to put “more flesh and substance” to the plans and programs of the PNP that “will cover every possible aspect of police work in 2016 and beyond.”

“I thus ask our Command Group, the Directorial Staff and all units to waste no time in completing this endeavor. Let this be our legacy to the next generation of personnel who will inherit this organization. Inspired by our achievements, encouraged by continuing challenges, and armed with the lessons of the past year, let us now continue to rid our streets and communities of criminal elements as we step up the war against crime more viciously and decisively this time, and win the community over to the side of peace with more relevant and compassionate public safety services,” he said. RAM

Read Next
Comelec seeks more time to respond to Poe’s petitions
EDITORS' PICK
‘NCR Plus’ to be under MECQ starting April 12 until April 30 — Palace
Pru Life UK receives four golden arrows for solid corporate governance
Pre-order the new vivo Y20s [G] to get a free TWS earphone
Malls adjust ‘NCR Plus’ operating hours for April 12-30 MECQ
Speed up your game with the new vivo Y20s [G]
Metro Manila to have shortened curfew hours from 8 p.m. to 5 a.m. under MECQ
MOST READ
Stop ‘creeping occupation’ of ‘militia’ boats in WPS, Pacquiao asks China
Bea Alonzo clarifies status of her relationship with Dominic Roque
Convicted former aide of Sen. Bong Revilla dies — BuCor
Locsin to China: ‘Then move out’
Don't miss out on the latest news and information.