President Aquino on Tuesday revealed there was an “alternative truth” to the Mamasapano debacle, eight months after the bloody encounter that claimed the lives of police commandos, civilians and Moro rebels, and set back the passage of a Bangsamoro law that could have been his legacy. The President said the photo of Malaysian terrorist Zulkifli bin Hir, alias “Marwan,” showing him dead in his hut that came out in the Inquirer on Jan. 30 “posed many questions and that is what we want to resolve.”

The so-called alternative truth, “may have very serious unintended consequences. Lives are at serious risk,” said one Inquirer source who asked not to be named for lack of authority to talk on the matter.

Various other sources also told the Inquirer that the photograph raised more questions than answers for the government even as then police Special Action Force (SAF) commander, Director Getulio Napeñas, said the operation was a success because his men took down Marwan.

Among these were why Marwan was half-naked and how the SAF was able to take pictures from such an angle if there was a firefight going on.

“There are certain quarters who did point out certain questions that arose from viewing that picture. Does this support the so-called official version of what transpired? Now, if it doesn’t support [the official version], can it be explained or not? That is an ongoing process. There is no conclusion at this point,” the President said.

He added that investigators were now looking for the witnesses “that will prove or disprove certain observations.”

But investigators were having a “difficult” time getting the witnesses, he said.

This was one of the reasons why Aquino said he would rather “not talk too deeply about the specifics because it might really hamper our efforts to get to the truth of this matter—the complete truth.”

He said that a meeting had been set next week to “discuss the specifics” of the indictment of over a hundred individuals over the deaths of the SAF commandos and the civilians caught in the crossfire.

Aquino disclosed the continuing investigation after Philippine Daily Inquirer editor in chief Letty Jimenez-Magsanoc, during the Meet Inquirer Multimedia forum, asked him if he has had closure on the fiasco that saw his approval rating drop down to its lowest.

“Do I have closure? I still have quite a number of questions, and there are various agencies of government tasked to ferret out the truth of exactly what happened in its entirety. There is an alternative version of events that happened there, which is undergoing very intense scrutiny,” Aquino said.

No threat of war

“I don’t submit to the premise that war will break out. I don’t think there is any interest from the major players to re-engage in a bloody conflict,” he said. 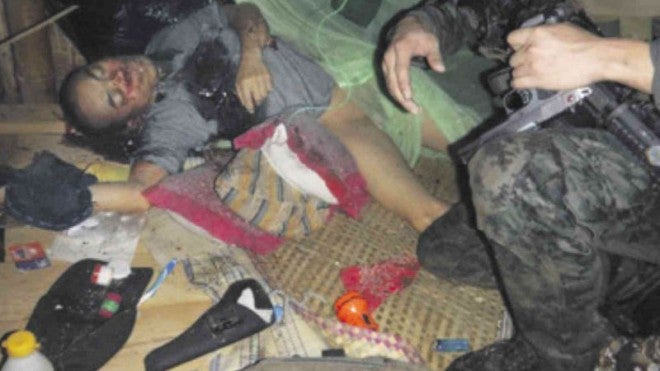 ALTERNATIVE VERSION A photograph of Zulkifli bin Hir, aka “Marwan,” raises questions about one official account of the Jan. 25 massacre of 44 police commandos on a fire fight that was already raging when the shot was taken in the hut of the Malaysian terrorist in Mamasapano, Maguindanao province. CONTRIBUTED PHOTO PUBLISHED IN INQUIRER ON JAN. 30.

But he did not discount the spoilers “who will want to exploit the current difficulties to show that their avowed aims of gaining what they want through violent means is the only way to go about it.”

“So those of us who are advocating peace should really even redouble our efforts to thwart these groups who would want us to branch again into really a pointless conflict,” he said.

“So, who should be blamed? I think I’ll leave that up to the Filipino people who will have an opportunity in next year’s elections to gauge the merit, or lack of it, of the people who will propose to lead various offices.”

The President remained optimistic that the BBL would be passed despite the “difficulties” it faced in Congress.

He said both Senate President Franklin Drilon and House Speaker Feliciano Belmonte Jr. have “expressed confidence that the BBL will be passed.”

“We want them to experience, and the population, in general, in this region the benefits or the so-called peace dividends arising from this agreement,” Aquino said.

He asked Congress to support “these initiatives,” such as the Sajahatra Bangsamoro, “that will shower these people with the peace dividends and get them further engaged in the process.”

He also said that the executive department would continue to lobby with the members of Congress to pass the proposed BBL “during our watch and pass it at the earliest possible time, so that the new mode of governance will have the maximum time to show the effectivity or the efficacy of this new mode of governance.”—Nikko Dizon

Read Next
Advice for provincial bus passengers: Avoid Edsa, wait in stations
EDITORS' PICK
97% of COVID-19 beds at PGH currently occupied
Gear up and get ready to play with Yamaha Mio Gear
Acer starts the year off strong with the Aspire Vero National Geographic Edition
Japan brings back virus restrictions over Omicron surge
Over 3 Million worth of prizes to be won at Smart Padala’s SENDali Manalo Promo!
Uproar over no vax, no ride policy: Maybe it’s time for gov’t to say sorry—Bello
MOST READ
1Sambayan names 7 aspirants in its 2022 Senate lineup
Emma Stone calls Andrew Garfield a ‘jerk’ after he ‘lied’ about his ‘Spider-Man: No Way Home’ appearance
Guevarra to Acosta: Obey rules on unvaccinated
PH to import 60,000 tons of fish to cover shortage
Don't miss out on the latest news and information.