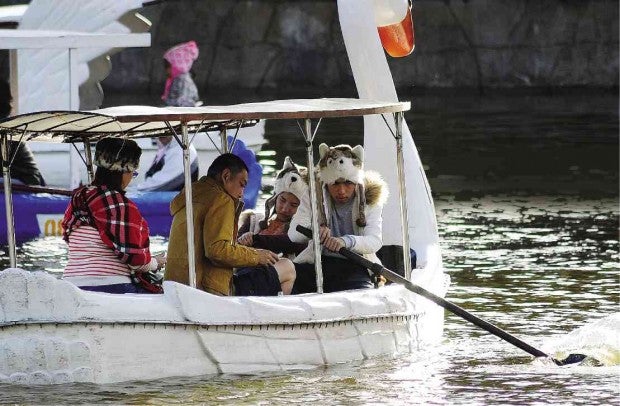 BAGUIO CITY, the summer capital, has experienced unusually warm days. At noon on Christmas Day, the mountain city dealt with a rather “warm” 26.4 degrees Celsius, at least for the city’s residents. But the city’s minimum temperature averaged 13 degrees C toward the end of 2015, which was good enough for tourists who needed the Yuletide holiday cold. EV ESPIRITU/ INQUIRER NORTHERN LUZON

BAGUIO CITY—The summer capital has not been getting its “brrr” nights as the year ends, but these are still bonfire-worthy nights for tourists.

These are not the coldest days for Baguio residents, even when the temperature on Tuesday dropped to 12.8 degrees C, the coldest in December.

Baguio was even warmer on Dec. 24 because that day’s lowest temperature was 14.8 degrees C. Temperatures increased to
15.4 degrees C on Dec. 25, frustrating residents who were expecting to enjoy the nippy weather.

Visitors who are not used to the mountain city’s holiday cold did not notice the difference. Many turned up wrapped in shawls and wearing jackets on Session Road in downtown Baguio even when temperature soared to 26.4 degrees C at noon of Dec. 25.

The year 2015 is an El Niño year, which may explain the warmer Baguio days and nights, said Jasper Pelayo, weather observer of the Philippine Atmospheric, Geophysical and Astronomical Services Administration (Pagasa) in Baguio.

El Niño is the seasonal warming of the Pacific Ocean which affects weather patterns and brings drought.

The World Meteorological Organization said average temperatures in January to September 2015 were the “hottest on record,” or since 1880.

The National Oceanic and Atmospheric Administration had described 2014 as “the world’s hottest year in 135 years of record-keeping.” Historically, Baguio’s coldest months are January and February.

Baguio’s coldest day in 2014 was Jan. 18 when the mercury dropped to 8.1 degrees C. Pelayo said Pagasa does not expect Baguio to get any chillier than 10 to 12 degrees C this month because El Niño would still affect the country later this year.

Last week, the cold weather prompted the Department of Environment and Natural Resources to issue an advisory urging mountain climbers to protect themselves from extreme cold as they hike to the summit of Mt. Pulag in Benguet.