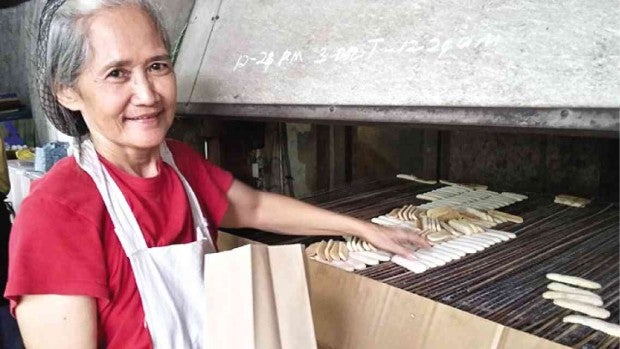 TOURISTS and travelers have other reasons to go to Baclayon town aside from wanting to see its century-old church, which was damaged by the earthquake that shook Bohol province two years ago.

At the back of the church is a row of pastry shops selling the famed “broas,” or ladyfingers, for which Baclayon, 8 kilometers from the capital city of Tagbilaran, has been called the the country’s “Broas Capital.”

Rowena Jala, 41, did not mind the trip days before Christmas. She wanted to give her family sweet treats, using the broas as base for her refrigerated cake.

There broas sold in malls in Tagbilaran, but these are not the same as the Baclayon prod ucts, Jala said.

Broas is a local version of the West’s ladyfingers. Unlike those sold elsewhere, Baclayon’s broas are light, sweet, crisp and melt in the mouth.

The pastry’s origin dates back to Spanish times. According to stories told to old-time residents, the Spaniards used a lot of egg whites as binding materials during the construction of Baclayon Church.

So the yolks would not go to waste, the Spaniards taught the locals how to make cookies and other pastries using the yolk as ingredient.

When Jala arrived at the stalls, all the broas had been sold out. “We had a lot of preorders since Dec. 8, which was our town’s fiesta. We are fully booked,” said Sylvia Fernandez-Maristela, proprietor of Osang’s Homemade Pastries.

Maristela said she had stopped accepting orders for the holiday menu. “For those walk-ins who come to buy our broas, we politely tell them to come back in January,” she said.

Orders usually start in May, when several towns in Bohol celebrate their fiestas, and peak during Christmas and New Year.

Though there are other food shops that sell broas, such as Tessie’s Sweets and Pastries, Israel Pastries and Sampaguita’s Cakes and Pastries, it was Osang’s which pioneered in the enterprise in the 1800s.

Rosa “Osang” Clarin, after whom the pastry shop was named, originally developed her special broas.

Maristela, Osang’s granddaughter, said it was Osang’s aunt who taught her how to make broas so she could start her own business.

Maristela inherited the business in 1973, which has been the main source of livelihood for the family.

“It is a big help to sending our children to college,” she said.

Maristela has four children. The eldest is Maria Joyce, 35 and a graduate of Bachelor of Science in Physics.

Another daughter, Maricel, 34, has a degree in BS in Electronics and Communications Engineering. Her son, Jopet, 32 is an architect while Jade Marie, 28, is an information technologist.

Maristela said Osang was not able to write down her recipe.

While she was growing up, Maristela learned how to make the broas by helping her mother bake the cookies.

According to Maristela, broas are made from simple ingredients—eggs, sugar and flour.

She said they make the cookies by hand, using the traditional method instead of using modern machinery.

After mixing all the ingredients, the mixture is placed inside a piping bag and then piped in a strip onto a thin metal sheet. “The shapes and sizes of the dough should be in uniform,” Maristela said.

The sheet of 10 fingers are placed inside the hearth.

After the broas are cooked, these are then transferred to a mat made of buri midribs with controlled heat coming from charcoals below where the broas harden to achieve the desired crispness.

Broas are then cooled and packed in brown paper bags for delivery.

But their best seller remains the broas—which do not only provide income for the family but also showcase the town’s rich history.