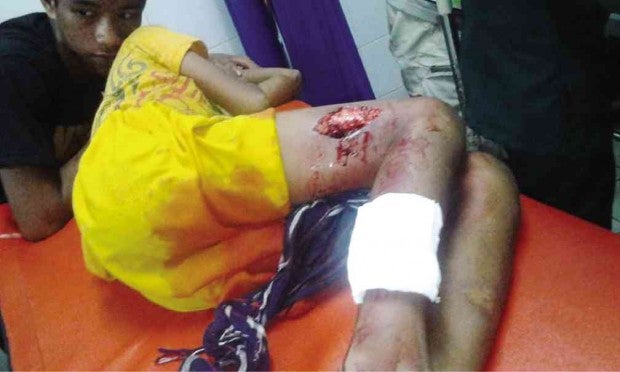 ONE of the children wounded allegedly when the Marines opened fire at houses in Maimbung, Sulu province. The children had been brought to the provincial hospital of Sulu. DR. IKBALA’S FACEBOOK PAGE

ZAMBOANGA CITY—Three children were injured allegedly when Marines opened fire at houses after being attacked in Sulu before dawn on Friday.

The military said it has started an investigation into the report, which was made by Dr. Raden Ikbala, of the integrated provincial health office in Sulu, in a post on his Facebook page.

Also during New Year revelry in the province, three more persons, two also children, were injured by bullets, according to Ikbala.

Ikbala said in his Facebook post that the Marines opened fire at houses in the town of Maimbung, Sulu, after a grenade attack on their detachment in the village of Matatal.

The Marines, he said, opened fire following the grenade attack but failed to hit any of the armed men who were believed to have lobbed the grenade.

“People scampered for safety,” Ikbala said in his Facebook post. “When the Marines stopped firing, the residents went home,” he said.

But after about 30 minutes, Ikbala said the firing resumed and residents reported that it came from the Marines.

This led to the wounding of the three children, said the doctor.

He did not identify the victims but said they were aged 12, 14 and 32. They had been brought to the provincial hospital past midnight of Thursday.

He said the 12-year-old victim, a girl, was hit by a stray bullet as she prepared food for the New Year celebration inside her house in the village of Mauboh in Patikul town.

The 14-year-old victim, a male teenager, was hit in the leg.

The 32-year-old victim, said Ikbala, was hit by a stray bullet as he played with his mobile phone near the mosque in Busbus, Jolo.

Expressing anger in his Facebook post, Ikbala said those responsible should go to the hospital and “ask for forgiveness from the victims.”

“They should know that it’s as if they directly shot the victims,” said Ikbala. “Based on Newton’s Law (gravity), the speed by which bullets travel upward and downward has no difference,” he said.

Maj. Filemon Tan Jr., spokesperson of Western Mindanao Command, said the military has started an investigation into the incident.

“We sent an inquiry team to check on the events that transpired. We will make a report of our findings,” he said.

Tan said the victims are being taken care of by the Marines, who were the ones who brought the children to the hospital. Julie Alipala, Inquirer Mindanao