‘Do you have anyone to protect?’ | Inquirer News
Close
menu
search

‘Do you have anyone to protect?’ 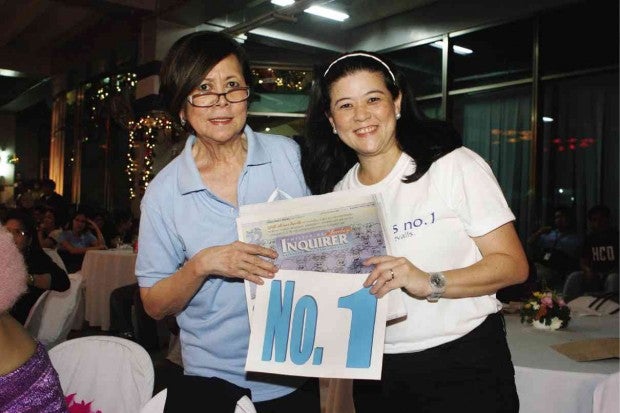 The chair of the Philippine Daily Inquirer, Marixi R. Prieto, remembers clearly the first words she ever exchanged with the paper’s editor in chief, Letty Jimenez-Magsanoc, more than two decades ago.

“The first thing she asked me was: ‘Do you have anyone to protect? In business or in politics?’” she recalled, smiling at the memory. This was sometime in 1994 when the Prieto family had just bought into the Inquirer.

Prieto was so taken aback by Magsanoc’s frankness that she could only exclaim: “Wow, Letty!”

“Then I said, ‘no, we’re not into big business, and we’re not affiliated with any politician,’” Prieto said in an interview on the second day of the public wake for Magsanoc at Aeternum Chapel, Heritage Park, in Taguig City City.

Magsanoc, an icon of democracy and press freedom, died on Christmas Eve.

Prieto, who is the mother of the newspaper’s president and chief executive officer Sandy Prieto-Romualdez, said Magsanoc must have been pleased by her answer.

“I think that made her feel good, because she knew she had a mission to do and bring out the news no matter who or what it was, without favoring anyone,” she said.

She said that her first brush with the fearless Magsanoc made a deep impression and gave her a good idea of what was in store for her at the Inquirer, today the leading English-language daily newspaper in the Philippines.

“I come from the business side. And I had just come into the paper. And I thought, ‘wow, so it’s going to be like this,’” she said with a chuckle.

Prieto said Magsanoc’s demise had left a big void in the Inquirer organization. “And we won’t be able to realize how much until later,” she said.

But the Inquirer will survive, she said.

“There are a lot of young people in the Inquirer who will take us to the next step. The Inquirer will be there with the same fearlessness and balance,” said Prieto, who was quite composed while inside the chapel earlier but choked back tears when she delivered her tribute to Magsanoc later that night.

“I know she’s trained enough of the reporters to do the same. It may not be the same for a while,” she said.

“[But] the Inquirer will remain strong. I think that’s the legacy of Letty,” Prieto said.

The second night of the wake gathered dozens of writers and journalists, politicians and other public figures, and family members, who came to celebrate Magsanoc’s life. Among them was President Aquino who stayed to hear the requiem Mass.

From sundown and well into midnight, Inquirer executives, editors, reporters and staff gave a warm, affectionate and often teary send-off to Magsanoc in the form of five-minute recollections of their encounters, conversations and exchanges with their esteemed editor in chief.

Decorated journalists from other organizations, many of whom had worked or collaborated with Magsanoc, also came, including Marites Vitug, Maria Ressa and Howie Severino.

Lacierda recalled his last conversation with Magsanoc at the dinner during the Asia-Pacific Economic Cooperation summit in Manila last month. He recalled asking her, “How come you always have scoops ahead of everybody else?”

Magsanoc just gave an “enigmatic smile,” he said. “Of course she didn’t want to reveal her trade secrets.”

He said the Inquirer, under Magsanoc’s helm, had become one of the most influential news organizations in the country.

Even though there were instances when he would sometimes say, ‘Bakit naman ganyan ang reporting ng Inquirer (why is the Inquirer reporting it like that?) But at the end of the day, it has always been fair,” he said.

“Knowing that Letty is at the helm of the Inquirer, we expect fair treatment regardless of who the reporters will speak to,” he said.

Valte said she was quite nervous when she first met Magsanoc during a roundtable meeting at the Inquirer recently. “But she made it very easy,” she said.

“She will know when to push you. You will know when she gave you a pass. So I guess it’s difficult to speak truth to power, but Letty was one of those people. And her record will show you that,” she said.

Valte said she believed Magsanoc would continue to cast her magic over the Inquirer in the years to come.

“So when people ask where the Inquirer is headed, I think it’s in good hands because of what she has ingrained in all of you,” she said. To which Lacierda chimed in: “And we expect no less from you guys to carry on the tradition of Letty.”

Broadcast journalist Severino said Magsanoc had succeeded in “really pushing the limits of the kind of impact you could have on how power is used and abused in the Philippines.”

He said he believed Magsanoc’s legacy would live on in the new breed of journalists she had helped nurture. “She did her mission. And it’s been completed. Now we are here to continue what she started,” he said.

He talked about how Magsanoc had groomed reporter Nancy Carvajal, who had been her secretary before becoming one of the paper’s most awarded journalists after her explosive investigative reports on the pork barrel scam.

“Without even the training or dreaming of it, she was groomed to be the Nancy Carvajal … To Nancy’s credit, she learned at the feet or in the office of one of the best. Letty was the one who pushed her to do her groundbreaking series on the pork barrel scam,” Severino said.

In just one reporter, he said, Magsanoc’s influence proves strong and true.

But Carvajal, in a separate interview, said all talk of transition in the Inquirer after the loss of Magsanoc was still too much to bear.

“I can’t picture the Inquirer without Letty. I can’t even picture life without her,” she said.