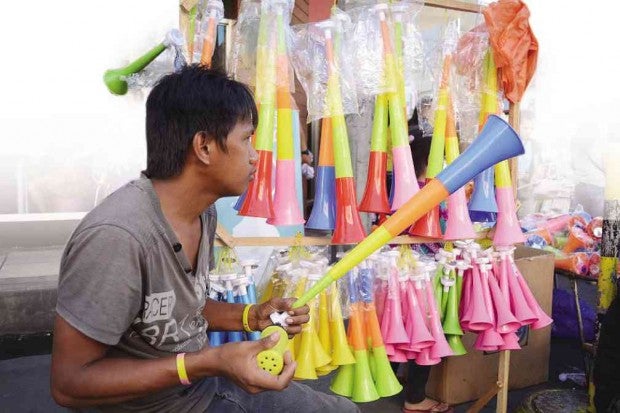 HORNS, this time made of plastic and imported from China, are enjoying brisk sale in Davao City, which bans all forms of firecrackers and fireworks and has been celebrating the holidays without gunpowder-based noisemakers. GERMELINA LACORTE/INQUIRER MINDANAO

DAVAO CITY—The city is celebrating another New Year without fireworks or firecrackers and showing nonbelievers that it is possible to be wildly joyous without the sparkle, noise or smell of gunpowder.

Since 2002, when the city council passed an ordinance banning firecrackers and pyrotechnics in all their forms, the city has been celebrating Christmas Day and New Year in ways that city officials said are not less festive than those highlighted by firecracker explosions.

More than a decade after firecrackers were outlawed through Ordinance No. 060-02, people in the city have turned to another noise-making gadget that is making a killing in sales here—horns.

Entering its third year, the city’s Torotot Festival seeks to draw more than 8,000 people, according to Arnold Dellosa, sales and distribution manager for southern Mindanao of telecommunications firm Smart Communications Inc., the main organizer and sponsor of the festival.

Starting with a parade winding up on Ponciano Street, “torotot” blowers will join the New Year countdown and other activities scheduled at the San Pedro Square here.

“The event has been organized to support the city’s firecracker ban, the zero-casualty and smoke-free campaign,” said Dellosa. “This is basically the essence of the event, why it was created in the first place,” he said.

The festival would feature zumba, a costume play contest and a show with international DJs, on top of contests for the most creative torotot, dance and costume.

Cars with sound systems installed in them would join and add variety to the noise during the parade and New Year countdown.

If Mayor Rodrigo Duterte makes true his promise to ban firecrackers in the country once elected President, torotot may soon be taking over the entire country in a firecracker-free New Year.

He had said that he could not understand why the country has to deal with firecracker injuries each Christmas and New Year when these can be prevented.

Duterte cited the case of the city as an example, where no firecracker-related injuries had been recorded for years now.

There are, however, still those who try to violate the law as in the case of two teenagers arrested here on Christmas Day for lighting up firecrackers.

But they are dealt with accordingly, authorities said. Charges had been filed against the two teenagers, who face possible imprisonment aside from paying a fine of P1,000 each for first time offenders.

Police said the individuals who sold them the pyrotechnics face penalties, too, under the ordinance.

The same ordinance, which the council passed after Duterte issued an executive order outlawing firecrackers, also banned the sale, manufacturing and transport of firecrackers and pyrotechnic materials in the city. With a report from Germelina Lacorte, Inquirer Mindanao