Aquino at Focap: ‘Candid’ and ‘honest,’ ‘in control’ 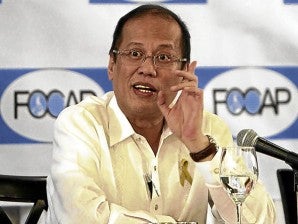 The only instance that President Benigno Aquino III showed irritation in the grilling by the foreign media Wednesday was when he was asked if he was playing video games during the deadly Manila bus hostage fiasco last year.

Despite this, the President was game as he answered questions raised by members of the Foreign Correspondents Association of the Philippines (Focap), some of whom described his replies as “candid,” “honest” and at times lacking in details.

“What you see is what you get,” was how one senior Focap member summed up Mr. Aquino’s first appearance as President before the foreign media.

The President’s appearance before Focap broke a five-year break in its tradition of having an exchange with the country’s top leader.

Speaking at the start of the forum, Focap president Girlie Linao said the group’s “much-awaited journalism tradition” came to a halt when then President Gloria Macapagal-Arroyo stopped accepting invitations from Focap in 2006 until her term ended in 2010.

“After a five-year break, President Aquino is breathing new life into this tradition that his late mother had so graciously supported,” Linao said, referring to his late mother, former President Corazon Aquino.

In his speech, Mr. Aquino said he was pleased to attend the forum and “effectively end the drought and revive this important tradition.”

The President was asked about issues that ranged from the West Philippine Sea (South China Sea) and Burma (Myanmar) to the proposal to finally bury the late dictator Ferdinand Marcos and the P72.11-billion stimulus package.

The President’s answers to some questions drew laughter.

“Besides tiring?” was the President’s answer to a Chinese correspondent who asked him to describe in a word his recent trip to China.

But just as he could take questions with humor, he did not take too kindly a question whether it was true that he was playing video games during the Manila bus hostage crisis in August last year.

The President told the reporter to look into the calendar of activities in Malacañang that day and to interview people.

He said the reporter would be able to get every minute of that day accounted for.

“So, if you just do a little checking, you will see that there is no basis for such an allegation and I’m sorry, I’m also human. I feel kind of insulted when I’m asked to disprove a non-event. And I think any of us given the same situation would also feel that way, why do I have to prove something that did not happen,” he said.

Pressed by the same reporter if he played video games at all, he said: “I can’t even go home to Tarlac anymore and that is my main source of relaxation.”

The 51-year-old President also gave a terse reply to the same reporter who asked him about his love life, which he had likened to Coke Zero. “Shall I say that that is not my priority at this point in time,” he said.

A senior Focap member said he found Mr. Aquino to be “in control of most of the subjects and issues” he covered at the forum.

But he said he found Mr. Aquino holding back when he answered a question about the Marcos burial.

“I don’t think he was very categorical. I sensed a little emotion because it’s a personal issue to him considering what happened between the Aquinos and the Marcoses,” the reporter said.

The reporter also said he did not think Mr. Aquino was well-prepared for the forum. He pointed out that the President would ask Communications Secretary Ricky Carandang at times on something that “he should know by heart” such as the West Philippine Sea, “a very important national issue.”

Another senior Focap member said the President should come prepared because the latter came up with some “tentative” answers. Still, he said he found Mr. Aquino to be candid.

Presidential spokesperson Edwin Lacierda, who attended the event, said the President did well in answering the question about video games.

“He was measured in his response but certainly he was voicing something as a human being, of being accused of something that did not happen,” Lacierda said.

“He came off very confident as in any forum and he was on top of the situation. It’s an eye opener for some to see the President filled all the questions,” he said.

Lacierda said that there were no preparations made for the forum and the President did not get any briefing from his communications staff.