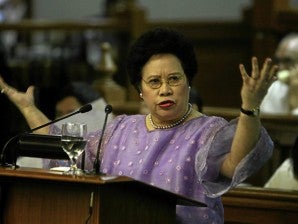 The controversy triggered by Presidential Adviser on Political Affairs Ronald Llamas’ cache of high-powered firearms may be a laughing matter to President Benigno Aquino III, but not to Senator Miriam Defensor-Santiago.

Santiago on Wednesday filed a resolution asking the blue ribbon committee to investigate the “apparent anomalies” in the issuance of gun licenses and permits to carry firearms outside of residence by the Philippine National Police.

In Senate Resolution No. 622, Santiago said the committee investigation should focus on Llamas.

“Simply because he is presidential adviser, and merely on his say-so of alleged death threats, Llamas is not automatically entitled to the rare privilege of a permit to carry for such ostentatious and high-powered firearms as an AK-47 and an M-16,” she said in the resolution.

“Although Llamas has announced that he has fired his security guards, nonetheless, he should be held to account on the principle of command responsibility and the constitutional principle of modest living.”

The President, a shooting buddy of Llamas, on Tuesday made light of the controversy and joked about it before a gathering of local government officials in Pasay City.

“Maybe you are thinking Ronald Llamas is hiding. He’s present and accounted for,” Mr.  Aquino said.

Llamas later told reporters that the President, himself a gun enthusiast, was “in a joking mood” during the affair “and it also seemed I was teased a little about it.”

But Santiago was in fighting mood, noting that Llamas’ firearms, including an AK-47 and M-16 rifles, reportedly found in his SUV during an accident last week—“provoked a major public scandal.”

“It appears that both the licenses and permits to carry were issued to Llamas after he had been appointed presidential adviser, on his mere claim that death threats have been made against him,” she said.

Santiago said the committee investigation should make the PNP explain its policy on the “kind and number of firearms that can be licensed to one person” and “for which permit to carry can be issued.”

The senator also wanted to know the “Top 10 highly placed government officials who were issued licenses and permits to carry after the May 2010 elections, and are now suddenly subject to alleged death threats, (including) the highest PNP official involved in the issuance of permits to carry.”

Santiago said the PNP should also report on the Top 10 individuals with “the highest number of licensed firearms” and those with the most number of guns “for which permits to carry have been issued.”

Senator Francis Pangilinan, a member of Mr. Aquino’s Liberal Party, defended Llamas, saying he should not resign over the scandal.

“Secretary Llamas has already taken swift action on the matter. He has terminated those involved in the incident and has submitted himself to the Philippine National Police for investigation. This is proof that he does not see himself or his people as being above the law,” Pangilinan said in a statement Wednesday.

At the House of Representatives, the minority bloc announced it would file a resolution seeking to investigate Llamas.

Zambales Representative Milagros Magsaysay said that the PNP should explain how Llamas was able to secure a permit for five high-powered firearms and whether he should be punished for letting his security guards carry the firearms in his absence.

But Speaker Feliciano Belmonte Jr. shot down the proposal, saying, “I think we have more important things to do.”

Chief Inspector Rodel Marcelo, head of the Quezon City Police District Criminal Investigation and Detection Group, said Wednesday he would ask Llamas to present his bodyguards and the firearms in an investigation to determine criminal liability if any.

Marcelo said police had also requested footage of two TV news crews that caught on camera the arms transfer from the Montero to another vehicle. He added that a request also had been sent to the PNP for a copy of gun permits issued to Llamas.

“We want Secretary Llamas to help us in the investigation,” Marcelo said. “We want to know who were there and who took the guns and where are they now.’’

Based on the traffic report dated October 7, Llamas’s Montero, driven by a Joey Tecson with a lone passenger identified as John Alarcon, collided with an aluminium van with Plate No. UVJ 951 driven by a Junnel Tenorio of GGMC Trucking Corp. at around 2:15 a.m. on October 7, in front of Ayala Technohub.

The report said both vehicles were coming from Fairview heading toward Philcoa when the accident occurred. It said Alarcon was injured and was brought to East Avenue Medical Center.

Senior Police Officer 4 Nelson Apostol of the Quezon City Traffic Enforcement Group said he arrived late at the scene and did not see the firearms. He said the Montero driver had disappeared and he was only able to talk to the driver of the van.