Court ruling a blow to Jakarta’s fight against haze 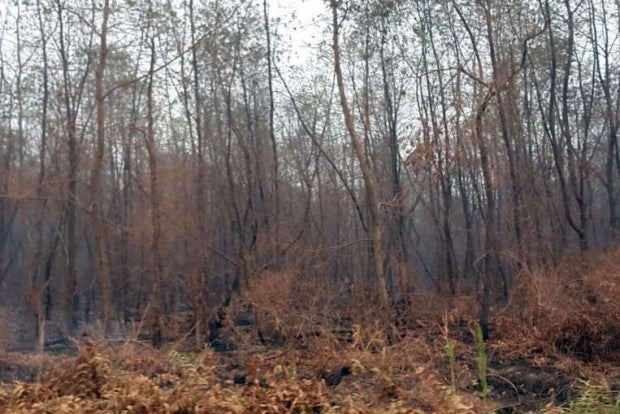 Mr Pharlis Nababan, the chair of the three-judge panel in the Palembang district court, ruled yesterday that there was no evidence showing Bumi Mekar Hijau purposely started fires to clear land, which then spread and led to environmental damage.

The ruling was a judicial blow to the government’s effort to deter future haze culprits, analysts say.

As deterrence, the government has the authority only to give administrative punishment such as suspending the licences of errant companies, while monetary fines must be decided by courts.

Last week, 16 plantation companies, including Bumi Mekar Hijau, had their business licences suspended and three others ordered to stop operations for good after a government probe found that they were responsible for illegal fires that caused this year’s haze crisis which hit the region including Singapore.

Mr Rasio Ridho Sani, director- general of law enforcement at the Environment and Forestry Ministry, told reporters in Palembang after the verdict that the government will appeal against the ruling.

“For the sake of the people who suffered from the haze, we will appeal. The facts on the ground clearly showed us there was fire on the company’s concession, and the company did not have adequate equipment to prevent as well as to contain fire,” Mr Rasio said.

Indonesian environment law says companies must douse a fire within their concessions, regardless of where the fire started.

Mr Maurice, a lawyer representing Bumi Mekar Hijau, told reporters: “The ruling objectively reflects what the conditions were on the ground, all facts and experts’ testimonies during the trial.”

The trial started in July this year.

The ministry has been suing plantation companies for causing land and forest fires since 2013. Environmentalists say that plantation companies in Indonesia often resort to illegal slash-and-burn methods to clear land, as hiring excavators to do the same job would cost at least seven times as much.

“The ruling does not serve justice to the environment and the people who have been suffering because of the haze,” Mr Zenzi Suhadi, a forest and plantation campaigner with the Indonesian Forum for the Environment (Walhi), said.

Mr Muhnur Satyahaprabu, the legal and executive policy manager at Walhi, said the judges do not seem to understand the vast impact of fire on peatland. He regretted the fact that none of the judges hearing the case has an environment certification.

Read Next
Friend of California shooter indicted on gun, terror charges
EDITORS' PICK
Beyond the Chocolate Hills: A farm-to-table, heritage culinary adventure of Bohol
MyCitiHomes premiers PH’s first 3-star certified BERDE District residential development
‘Crash Landing on You’ couple confirms pregnancy
Enrile contracts COVID-19: ‘To my critics and enemies, I am not going to die yet’
Metro Manila’s COVID-19 positivity rate jumps from 3.9% to 5.9% — OCTA
House energy committee chair Arroyo bats for cheap electricity
MOST READ
Duterte: It was correct for Bongbong Marcos to ‘decline’ presidential debates
Enrile contracts COVID and snipes at critics, foes: ‘I am not going to die yet’
Russia steps up missile strikes on Ukraine as G7 leaders gather
Dennis Padilla answers Leon Barretto’s open letter: ‘Been reaching out to you for 15 years’
Don't miss out on the latest news and information.