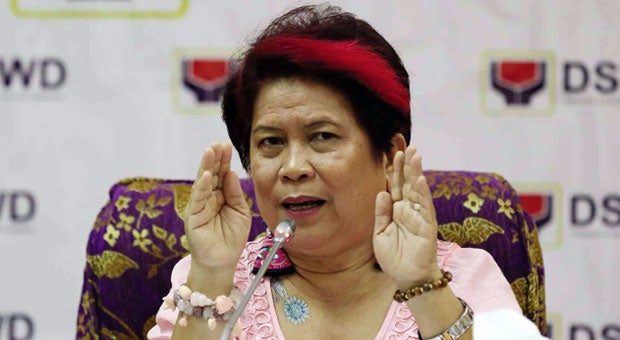 BAGUIO CITY, Philippines—The widows and relatives of 44 policemen killed in a mission to arrest two terrorists in Maguindanao province in January have put up small businesses using government aid to help them make a living after losing their breadwinners, Social Welfare Secretary Corazon “Dinky” Soliman said here on Tuesday.

Soliman was reacting to complaints that some of the government’s promises to the families of the slain members of the police’s Special Action Force (SAF) have not been fulfilled.

Fourteen of the SAF 44, the phrase given by the media to the slain policemen, were from the Cordillera region.

Soliman said the Department of Social Welfare and Development (DSWD) gave the families cash through the agency’s sustainable livelihood program.

The DSWD has not issued a list of benefits granted to the SAF 44 families, but Soliman said the agency allocated P68,635 for a sari-sari store put up by John Rey Kodiamat, brother of slain PO1 Angel Kodiamat, and P210,500 for a laundry shop operated by the parents of PO2 Nicky Nacino Jr.

Soliman said the livelihood projects are on top of benefits from the Philippine National Police and the Department of the Interior and Local Government.