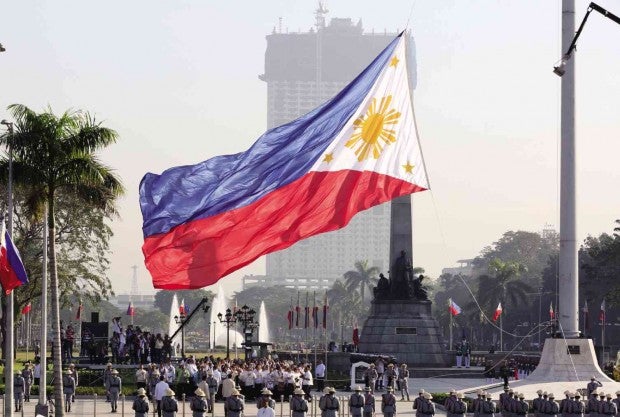 FLAG RAISING ON RIZAL DAY To commemorate the 119th anniversary of the martyrdom of the hero Dr. Jose Rizal, President Aquino led the flag-raising ceremony at Rizal Park in Manila for the last time in his six-year term. In the background is the 42-story Torre de Manila condominium building that the Knights of Rizal wants dismantled for marring the vista of the Rizal Monument. NIÑO JESUS ORBETA

For the last time during his term and with virtually the entire Philippine Air Force roaring overhead, President Benigno Aquino III on Wednesday led the annual flag-raising and wreath-laying rites to mark Jose Rizal’s death anniversary.

In a message, Mr. Aquino paid tribute to the national hero for working hard to pursue the country’s independence, “serving as a catalyst for change.”

He urged Filipinos to “remember (Rizal) … along with other heroes who shared their vision to make the Philippines the nation it is today.”

“May we all be inspired by Dr. Jose Rizal’s courage and intelligence, his sense of duty, hunger for knowledge, passion for reform, and undying love of country,” Mr. Aquino said.

Dec. 30 marks the execution of Rizal by the Spanish colonizers at the 140-hectare national park, formerly called Bagumbayan and now bearing his name.

On Dec. 30, 1896, or 119 years ago, the Calamba, Laguna, native, accused of political conspiracy, sedition and rebellion against the Spanish government, was shot to death by a firing squad of Filipino soldiers.

Four days earlier, a Spanish court-martial had found Rizal guilty of the charges.

On Dec. 28, 1896, it was decided that he would be executed by musketry. Then Governor General Camilio Polavieja confirmed the death sentence.

Two days later, at 7:03 a.m., Rizal was executed. His body was buried in an unmarked grave at nearby Paco Cemetery.

On Aug. 17, 1898, his remains were exhumed and brought to the family’s house in Binondo, Manila.

In 1913, the remains were transferred to the Rizal monument, which now serves as his final resting place. The exact spot where Rizal was executed is about 100 meters northwest of the memorial.

At yesterday’s program, which lasted for less than 30 minutes, the President was accorded full military honors with a 21-gun salute.

At the last note of “Lupang Hinirang,” the national anthem, two FA-50 fighter jets, which the Air Force acquired recently from South Korea, conducted a high-speed pass over the park.

The wreath-laying was followed by a full fly-by of 36 air assets of the military, including 10 Cessna and 15 Stelio Frati trainer aircraft, five Augusta Westland helicopters and three combat utility helicopters, among others.

During the occasion, the President also met two descendants of Paciano, the hero’s brother—Ester Lopez-Azurin and Marlene Jacinto.

Another Malacañang official, who asked not to be identified, said the program could have been perfect were it not for the soaring “eyesore”—the controversial, 49-story Torre de Manila building—which mars the view of the Rizal monument.

In previous Rizal Day celebrations, the Vice President had also been invited,” he told the Inquirer.

‘Be a hero’ — President Aquino in Rizal Day rites