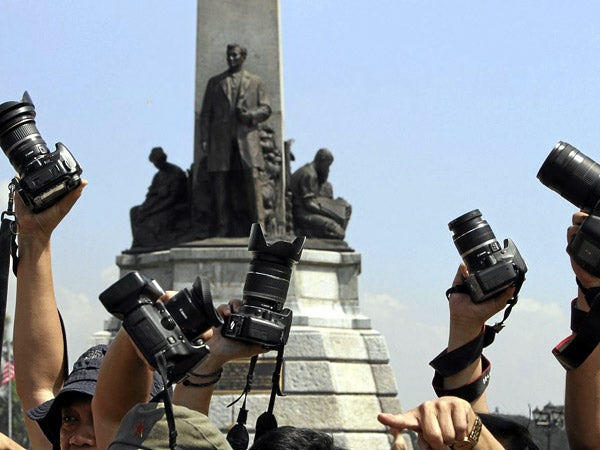 The Armed Forces of the Philippines will display its newest air assets in a fly-by during Rizal Day rites at Rizal Park today to show the progress of its capability upgrade.

Thirty-eight air assets will fly over the Rizal Monument during the flag-raising and wreath-laying ceremony to be led by President Aquino in the morning.

This is the second fly-by this month, as the AFP featured 40 of its aircraft in a similar exercise during its anniversary on Dec. 21 at Clark Air Base.

“After our fly-by during the AFP anniversary last week, there were suggestions it should be done at national events. This is the first fly-by for a Rizal Day commemoration,” said Col. Restituto Padilla, AFP spokesperson, in a press briefing at Camp Aguinaldo.

Two Bell UH-1H military helicopters will make a flower drop as officials led by Mr. Aquino honor Rizal on his 119th death anniversary at his monument.

The AFP said the fly-by will be a testimonial to President Aquino’s support for the military’s modernization program and to show the public the AFP was turning into a world-class military.

“I hope our countrymen will feel a sense of pride when they see our air assets, that they will be proud of our country and our AFP which is transforming into a world-class military, something we should be proud of,” Padilla said.

More than 40 air assets took part in the fly-by at Clark during the AFP anniversary, along with more than 150 land vehicles.

Although grander than the Rizal Day fly-by, the AFP anniversary’s parade of assets was limited to government officials, employees and AFP personnel taking part in the activity.

The Rizal Day fly-by will allow the public to get a first-hand glimpse of the brand new FA-50 fighter jets bought from South Korea.