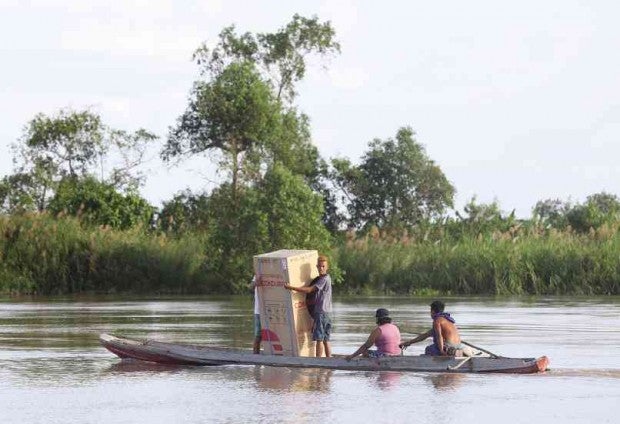 THERE’S NO STOPPING this family from bringing home their new appliance unit, a refrigerator, at the height of flooding brought by Typhoon ‘Nona’ during the Christmas holidays. The boat carries the family across the Pampanga River in Barangay Bebe Anac in the town of Masantol in Pampanga province. LYN RILLON

THE YEAR 2015 in northern and central Luzon began by birthing new heroes and by reminding people that compassion is a global ideal. It ended, however, with nature unleashing its wrath and leaving residents of Central Luzon provinces spending a wet Christmas.

The Jan. 25 massacre of 44 policemen, who were tasked with arresting two terrorists in Mamasapano, Maguindanao province, reminded people about the risk that lawmen face each time they wear their uniforms and go on duty. While the tragedy created heroes out of ordinary soldiers, it also exposed how politics could ruin the most well-intentioned plans.

Fourteen of the slain policemen assigned to the police’s Special Action Force (SAF) returned to a hero’s welcome in their native Cordillera. Honors were also given to SAF members who hailed from provinces in the Ilocos, Cagayan Valley and Central Luzon.

One of the slain policeman’s relatives in Baguio City said they were upset that no one had been jailed for killing the 44 policemen after the spotlight had shifted away from the tragedy.

The execution of Mary Jane Veloso, an overseas worker from Nueva Ecija province, was suspended by the Indonesian government on April 29, amid the appeals of nongovernment organizations and the Philippine government.

Malacañang had requested the Indonesian government for time to prosecute people allegedly responsible for pushing Veloso to smuggle illegal drugs into that country in 2010, for which she was handed the death penalty.

An Indonesian women’s group who visited Veloso on Christmas Eve said she had high hopes that she would be freed and be with her family again, said lawyer Edre Olalia, secretary general of the National Union of Peoples’ Lawyers (NUPL).

While Jabalde’s Dec. 1 decision drew praise, Laude’s family and gender rights activists said it was not the justice Laude deserved.

Pemberton was sentenced to a six to 12-year jail term which he would serve at a facility in Camp Aguinaldo in Quezon City.

But it is not over. Pemberton’s lawyers have asked the court to reconsider its homicide conviction and called for his acquittal. The court will hear their arguments on Jan. 7.

Natural disasters and environmental and business conflicts showed the dark side of 2015.

Not one of the 49 container vans filled with imported trash had been returned to Canada almost three years since 103 containers of garbage were smuggled into Manila in 2013. The containers were brought by the Bureau of Customs to Central Luzon—26 of these were unloaded at a private landfill in Tarlac province, eight containers are still parked and locked in the same facility, while 15 other containers are stored with rotting trash at the Subic Bay Freeport in Zambales province.

Environmentalists, Tarlac officials and residents ended up disappointed when the Canadian trash issue was excluded from talks between President Aquino and Canadian Prime Minister Justin Trudeau on the sidelines of the Asia-Pacific Economic Cooperation summit in Manila.

Natural hazards continued to cause disasters in Central Luzon. Typhoon “Nona” (international name: Melor) in December flooded 116 villages beside the Pampanga River, which drains toward Manila Bay. Around 6,000 families at the left bank of the Pampanga River in Masantol and Macabebe towns spent Christmas in flooded homes or atop a dike there.

Heavy rains dumped by Typhoon “Ineng” (Goni) in the Cordillera in August triggered landslides that killed at least 22 people in the region. Sixteen fatalities were small-scale miners whose camp in Mankayan, Benguet province, was buried by rocks and earth from a toppled mountainside.

The typhoons that struck this year left P2-billion worth of crop losses in Cagayan Valley.

Fight to save trees

In Pangasinan province, 2015 was about a fight to save 770 trees, which the Department of Public Works and Highways (DPWH) intended to remove to widen a section of the Manila North Road (MNR) traversing five towns and Urdaneta City. These were what were left of the 1,829 trees marked for cutting along the 42-km stretch of the MNR, which were spared because a tree-cutting permit expired in February 2014.

As DPWH applied for an extension of its permit, environmentalists asked an Urdaneta City court to issue a temporary environmental protection order over the condemned trees. The provincial board also passed a resolution opposing the tree-cutting activities. But the case had dragged on and before the court could resolve the case, the Department of Environment and Natural Resources extended DPWH’s permit on Nov. 2. By Dec. 15, DPWH had felled all trees, sparing about at least 108 trees, which were not inside the road’s right of way.

The story of Camp John Hay’s contractual dispute should have ended amicably in February, when an arbitration tribunal wiped the slate clean. The arbiters rescinded a 1996 lease to convert the former American rest and recreation center into a tourism estate, ordered developer Robert John Sobrepeña to return the property to the government, and obligated the government to reimburse his P1.4 billion rent payments.

Then both sides went back to court. The year ends and neither side has fulfilled the PDRCI judgment, so the Camp John Hay story closes another year without a proper ending. Reports from Tonette Orejas, Allan Macatuno, Anselmo Roque, Armand Galang, Ron Lopez, Villamor Visaya Jr., Melvin Gascon, Gabriel Cardinoza and Vincent Cabreza