Freedom for turtles starts at beach 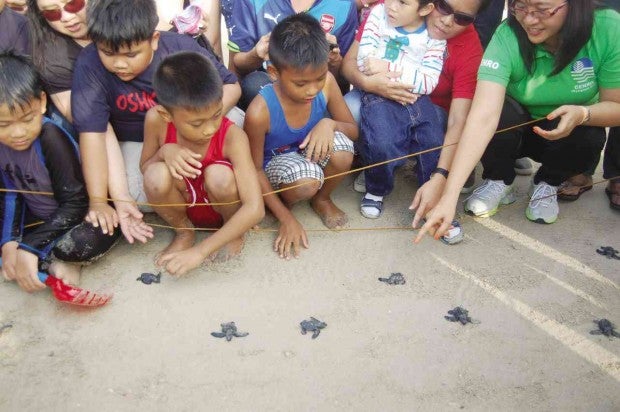 BEACHGOERS and their children take time off from their holiday on Dec. 26 to release 36 baby turtles to their natural habitat at All Hands Beach in Subic Bay Freeport. ALLAN MACATUNO/Inquirer Central Luzon

SUBIC BAY FREEPORT—The journey at sea of 36 olive ridley sea turtle (Lepidochelys olivacea) hatchlings began on Saturday after they were released from their hatchery at a local beach resort here into the Subic Bay.

Beachgoers and their children took a break from their holiday at All Hands Beach to bring the baby turtles to their natural habitat at 4 p.m.

Children watched the newly hatched turtles race to the shore as the animals made their way to the sea for the first time.

All Hands Beach is among seven major areas inside the free port that have been identified by the Department of Environment and Natural Resources (DENR) as nesting sites for marine turtles (pawikan).

Castillo, who witnessed the release, said an adult sea turtle laid 42 eggs in November but only 36 were hatched.

Emerita Sebial, chief of the protected areas, wildlife and coastal zone management service in Olongapo City, said three of the seven species of sea turtle in the world can be found in Zambales province.

The DENR has been recognizing the efforts of All Hands Beach in the conservation and protection of the marine turtles and their habitat, Sebial said.