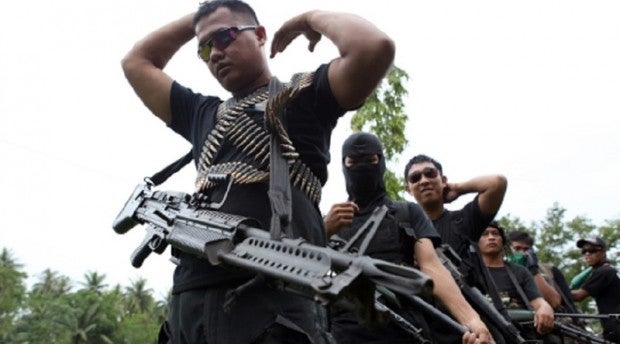 CAMP SIONGCO, Maguindanao—Moro rebels opposed to peace talks with the government on Sunday vowed more violence after Christmas attacks that left at least 16 people dead in Central Mindanao and may have been partly influenced by the notoriety of the Islamic State (IS) group.

“We will continue attacking government forces, their detachments, at a time they least expect,” Abu Misry Mama, spokesperson for the Bangsamoro Islamic Freedom Fighters (BIFF), said in a radio interview.

Mama confirmed the BIFF was behind the Christmas Eve and Christmas Day attacks in the provinces of Sultan Kudarat, Maguindanao and North Cotabato, where the rebels killed 11 civilians and lost five of their own in clashes with government troops.

“I am announcing now, we will continue our attacks against soldiers so they better prepare,” Mama said.

“The soldiers should be ready all the time, because we will strike anytime. We don’t want them in our land,” he said.

About 200 BIFF insurgents took part in at least eight attacks on Thursday and Friday, according to Capt. Joan Petinglay, spokesperson for the Philippine Army’s 6th Infantry Division.

Other reports gave the number of insurgents at 300 and said eight farmers were killed in the border towns of Esperanza in Sultan Kudarat and Datu Abdulla Sangki in Maguindanao early on Thursday.

The attacks forced 200 families, or 6,000 people, from their homes in the villages of Paitan in Esperanza and Kakal in Datu Abdulla Sangki, according to Chief Insp. Bryan Bernardino, Esperanza police chief.

They are now sheltering at the Esperanza municipal stadium, he said.

“They celebrated Christmas in the town stadium. They return to their communities at daytime but return to the gym at night,” he said.

Petinglay said the military learned about the impending attacks and secured towns and villages and warned villagers not to venture out, preventing a large number of casualties.

Despite warnings from the military, five farmers went to their farms on Thursday to spray insecticide on their crops in Maguindanao and were captured and executed by the rebels, Petinglay said.

In Esperanza, rebels fleeing from Army troops took a family hostage on Thursday, freeing a mother and her child but killing three farmers, she said.

The rebels also stormed the villages of Simsiman and Malagkit in Pigcawayan, North Cotabato, killing a village official. They also fired a grenade at a Roman Catholic chapel during Christmas Eve Mass, killing two churchgoers.

Petinglay said villagers in one area hid in a Roman Catholic church after word of the rebel assaults spread.

At least four rebels died in a clash when they assaulted a military outpost in Esperanza on Thursday, sparking a gun battle, she said.

One other wounded rebel was reported to have died in a village clinic, she said.

Lt. Col. Ricky Bunayog, 33rd Infantry Battalion commander, said two homemade bombs were left by the rebels in a jungle trail where pursuing troops would pass, but the soldiers found the explosives.

Mama claimed the people killed by his group were militiamen, and said the attacks were inspired by IS, the group of jihadists that holds swaths of Iraq and Syria.

IS has claimed responsibility for the downing of a Russian commercial plane over the Sinai Peninsula in Egypt, killing all 224 people onboard, on Oct. 31, and the multiple attacks in Paris that left 129 people dead and 352 others wounded on Nov. 13.

Mama’s claim, saying in a radio interview that the BIFF only “wanted to project it is still a force to reckon with after [being] reduced to a ragtag [band] of bandits following Army offensives in January.”

Petinglay said all units of three Army brigades in the region had been placed on full alert for possible BIFF attacks.

The proposed Bangsamoro Basic Law is stalled in Congress, but administration allies in the House and in the Senate have expressed hope the bill will be passed before President Aquino steps down at the end of June next year.

Riding on IS ferment

“They’re riding on the ferment of [the Islamic State group] and, second, they see uncertainties precisely because of the delay and they want to generate some momentum,” Ferrer said.

She warned of increased attempts by the BIFF to “destabilize” security in Central Mindanao, but Col. Restituto Padilla, spokesperson for the Armed Forces of the Philippines, said the military was ready, as it expected more raids and harassment by the rebel group in retaliation for losses it had suffered in a series of military operations early this year.

Padilla said the military and the police were keeping the clashes “localized,” as government forces hunt down the rebels behind the attacks.

The latest attacks were the most brazen by the BIFF since a military offensive against the group left more than 100 rebels dead early this year.

The BIFF still has about 100 armed fighters who may have been joined by relatives and new recruits to stage the attacks, the military said. With reports from Julie M. Aurelio from AP

Soldier killed, 3 wounded in clash with BIFF men in Maguindanao