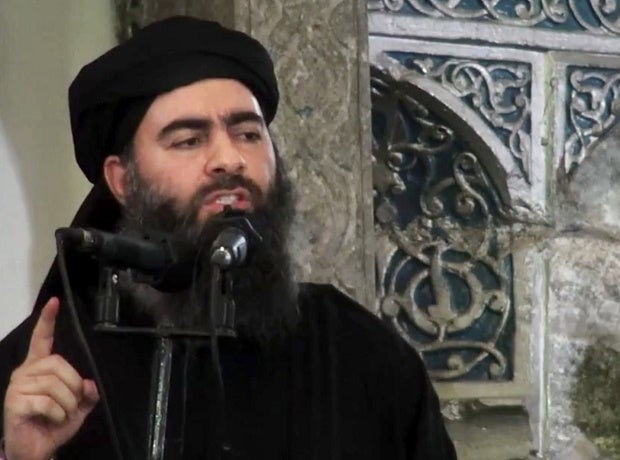 This file image made from video posted on a militant website Saturday, July 5, 2014, purports to show the leader of the Islamic State (ISIS) group, Abu Bakr al-Baghdadi, delivering a sermon at a mosque in Iraq during his first public appearance. The ISIS group has released a new message purportedly from its reclusive leader, claiming his self-styled caliphate is doing well despite an unprecedented alliance against it. AP File Photo/Militant video

BEIRUT, Lebanon—Abu Bakr al-Baghdadi, the secretive leader of the Islamic State of Iraq and Syria (ISIS) group, called for an uprising in Saudi Arabia and pledged to attack Israel, in an audio recording released Saturday and attributed to him.

The 24-minute recording would be Baghdadi’s first in seven months, during which ISIS has been dealt several blows in Iraq and Syria.

There was no way for AFP to authenticate that it was Baghdadi speaking, but the voice appeared to match previous recordings of him.

And it was not clear when the recording was made, but it referred to a 34-nation anti- ISIS coalition announced by Saudi Arabia on December 15.

“They announced lately a coalition… falsely called ‘Islamic,’ and announced its goal is to fight the caliphate,” said the speaker in the recording circulating among pro- ISIS Twitter users.

“If this coalition were Islamic, it would have announced victory and aid to the people of Syria,” he said.

He called on Saudi citizens to “rise up against the apostate tyrants, and avenge your people in Syria, Iraq, and Yemen.”

Baghdadi regularly attacks the Saudi kingdom in his recordings.

In his last message, he accused Saudi rulers of launching an air campaign against Shiite Huthi rebels in Yemen only to please the West.

Baghdadi also pledged to attack Israel, saying IS has “not forgotten Palestine for a single moment.”

“And soon, soon with God’s permission, you will hear the footsteps of the mujahedeen… We are getting closer to you day by day,” he said.

The recording did not appear to be accompanied by multilingual transcripts, which has been in the case with other Baghdadi audio messages.

Baghdadi made his first and last public appearances in the summer of 2014 in the Iraqi city of Mosul, which ISIS holds.