She taught me writing is never about the writer 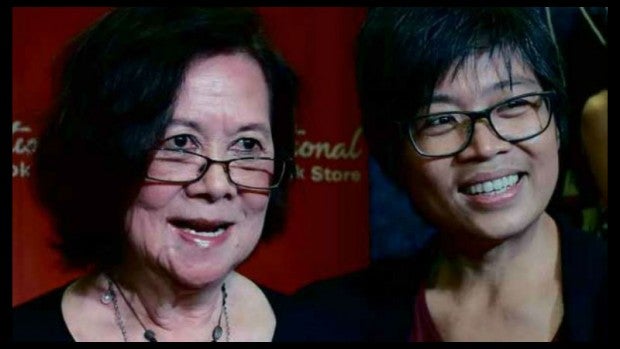 OVER lunch on Christmas Day with my family, I thought to raise a drink to my former editor, Letty Jimenez-Magsanoc, or LJM, as everyone fondly called her. Before we clinked glasses, I attempted to tell my children who Letty was and why she was so important to me. But my simple summing up caused a flood of memories—and tears—that made my every word shrivel and lose their meaning.

How could I sum up how Letty made me the writer and person that I am? The story I told over Christmas lunch must have sounded exciting and extraordinary to my children, brought up in first-world England, never knowing what it’s like to live without choice. Did they get that this was more a coming of age than an adventure?

I told them how I met Letty as a student, interviewing her for a thesis on press freedom that I was writing with my best buddies, Frankie Joaquin and Vicky Suba. How Letty invited us to work for her when we graduated, giving Frankie and me our first jobs (Vicky became a film actress). How I had been so thrilled to work with Letty, having long been a fan of her column in Panorama magazine, which she also edited. How I had been shocked when she was fired for writing a piece critical of the Marcoses. How I cut my teeth as a fledgling reporter working for Letty on a magazine dedicated to exposing the evils of the Marcos regime. (Letty always corrected me: “You don’t work ‘for’ me, Candy, you work ‘with’ me.”)

The person I was before I began to work with Letty was not much to shout about. I was one of legions of middle-class Filipinos living on the edge of deprivation, with a parent determined to work abroad, of course. And, yes, I’m ashamed to say, sheltered, with no awareness of life apart from home, school, family, friends. Ninoy Aquino? Who’s that?

I was a fairly good writer with a fervent aspiration to become a novelist. But words are nothing without meaning and understanding. And one thing was for sure: I knew nothing. My first weeks under Letty’s tutelage were made excruciating by my ignorance and arrogance about my abilities.

But here was where luck played a part. Of all the editors of all the magazines in all the cities in the world, I got Letty. She edited with a green ballpoint pen. I never really did ask her why. But it was comforting. I was fresh out of school and used to teachers bloodying my essays with red poison pens that declared me a failure. Green ink was friendly, companionable and told me once more, “You work with me” not “You work for me.”

Green ink doesn’t feel as accusing as red ink. Where red ink would say: “You’re wrong, what a terrible writer you are!” Letty’s green ink told me: “Let’s take this to the next level.”

Later, I accepted the public’s compliments, “I especially loved that line you wrote…”

“Thank you,” I responded generously to fans, even though the words were not mine, but Letty’s.

When people asked what I did, I said: “I am a journalist.” Not a reporter. Not a writer. A journalist. I took pride in my work, even though the context of my reportage, the “so what” of my stories all came from Letty.

But I learned. So much.

Pretty writing is useless without meaning. Fresh out of university I could turn a phrase like the best of them. But what did I really mean? It was Letty who interrogated my writing and forced me to think. It was Letty who sent me off to the far corners of the Philippines to bear witness to unfolding events. It was Letty who made me realize that there are many versions of the truth and that you had to shed everything you knew previously to learn how to see it.

The best journalism, we are often told, is objective. But how could I be objective if I wrote for the opposition press? When I expressed this misgiving, Letty just laughed in her throaty, two-maybe-three-pack-a-day, smoker’s laugh. “Nobody can be objective,” she told me. “It’s just not possible. But you must be balanced.” Which means knowing how to ask hard questions even when you agree with the other person’s point of view. Which means resisting the urge to be uncritical of someone you agree with. Which means not being afraid to be wrong.

I was not surprised, when Letty became editor of the Philippine Daily Inquirer, to see that its slogan was: “Balanced news, fearless views.”

Balanced—that was the minimum requirement for anyone working with Letty. And fearless? Well, that was just the way things were with her.

Libel was always a risk—a libel suit was an easy way for someone in the administration to keep Letty at bay and protect his or her own. At the magazine, we pored over headlines and blurbs. How do we get the truth out there without getting slapped with yet another libel case? The answer: question marks. A question was not a statement of fact. How I marveled when Letty converted a potentially vexing headline into an innocent question by changing punctuation. Genius.

Recently, I met another journalist who worked with Letty on a story that invited death threats galore from slighted and guilty parties. “She took me by the hand,” the journalist said. “She led me where I needed to go. And she stayed with me. She wasn’t going to leave me on my own.”

When you were there, on the day, to witness Letty doing something courageous— say, poking fun at some unconscionable thing that Imelda Marcos had done, or saying things the way they really were and not accepting the safe, easy, convenient, escapist, let-things-be route—you were never aware of the fearlessness or even the danger of the moment. All you knew was what Letty always made clear: It was imperative to tell this story. Some stories just had to be told. Should the consequences stop you from telling it?

Today, I live in faraway England. I have also left journalism to fulfill my dream of writing novels for children. My novel, “Tall Story” had been nominated for the Carnegie Medal. My second book, “Shine,” had been nominated for the Guardian Children’s Fiction Prize. My two books have won the Crystal Kite Prize for Europe. Whenever I come home to launch my books, I’m surprised at how pleased Letty was with my success. But she always took issue when I call myself a former journalist. “You will always be a journalist,” she said, “because you cannot help wanting to tell the story.” And though I no longer write articles for newspapers and magazines, I know she is right.

I live in a different world now. And yet what I learned from Letty is deeply embedded in everything I write.

Letty taught me that simple punctuation can transform meaning, that writing is never about the writer (“We are not the story!”), that while there is no such thing as a totally objective reporter, there is such a thing as balanced reporting.

She taught me that humor can lift the mood while deepening meaning, that every word counts and that there are stories everywhere if you know how to look.

She showed me that yes, it is possible to effect change but only if you were willing to do your part and do not shirk from asking difficult questions.

She made me a better writer and a better person, and I will miss her forever.

(Editor’s Note: Candy Gourlay nee Quimpo started her writing career in 1984 as a staff writer for Mr. & Ms. Special Edition, which was published by Eggie Duran-Apostol and edited by LJM. She became associate editor of the Special Edition in 1986 and was one of the first staff writers of the Inquirer when it was first published as a weekly. She now lives in London with her family. Her award-winning books for young adults are published by Penguin Random House in the United Kingdom and the United States. In the Philippines, her books are published by Anvil. www.candygourlay.com)