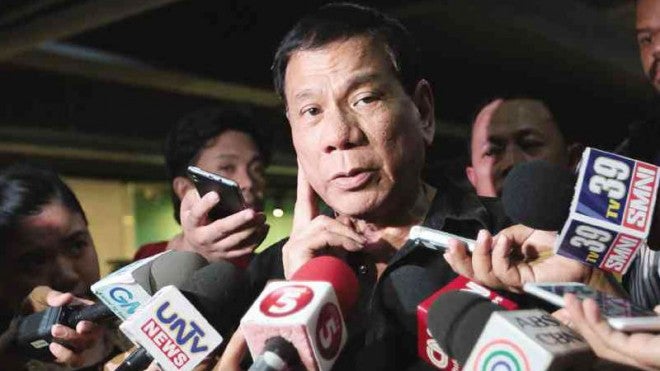 DAVAO CITY—Gunfire may be music to his ears, but the noise of firecrackers makes him explode.

So, if elected President next year, Davao City Mayor Rodrigo Duterte, speaking on his regular television program on Sunday, said he would ban firecrackers throughout the Philippines to keep Christmas and New Year’s Eve celebrations safe for all Filipinos.

Duterte, who brags about killing 1,700 people and does not mind being associated with so-called death squads responsible for the extrajudicial executions of criminals in Davao City, has been playing Scrooge by banning firecrackers here since 2001.

He takes pride on the absence of firecracker injuries in Davao, even on New Year’s Eve, a record that he plans to replicate in the rest of the Philippines after taking Malacañang—that is, if he is elected.

Filipinos traditionally welcome the New Year with the loudest bang they can produce with the largest firecrackers they can find.

Holiday revelries begin on Christmas Day, though the noisemakers during this time are limited to the snap bangs used during fiestas.

New varieties come out every year and no matter what they are called and how dangerous they are, Filipinos just can’t resist them, and that’s because New Year’s Eve is not New Year’s Eve without firecrackers.

In addition, colorful fireworks light up the Filipinos’ New Year’s Eve skies, with competition-grade lightmakers reserved for the last quarter to midnight.

Thousands are injured during the revelries every year, but Filipinos just can’t be stopped and their passion for firecrackers sustain an industry that sees real money only during the Christmas and New Year holidays.

Not to worry, he said. The firecracker industry can still operate, but manufacturers cannot sell their products in the Philippines.

“Better to export them instead of selling them here,” Duterte said.

He did not say if he had a study on the feasibility of exporting Philippine-made firecrackers or if he knew whether there was a demand for Philippine firecrackers in foreign markets.

Duterte, who topped one Social Weather Stations voter preference poll commissioned by a Davao businessman, does not seem to care much if he loses votes because of his controversial ideas.

He showed that attitude by saying he plans to phase out labor contractualization, which companies use to keep their costs low.

“I know that business is a bit scared about my stand on labor contractualization, but if you don’t like it, don’t vote for me,” he said.

“I’m here to serve the people’s interest and not the interest of business,” he added.