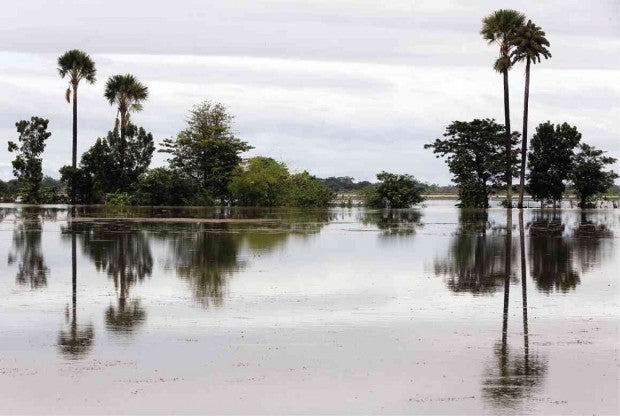 A FLOODED rice field in the village of Kaingen in Jaen town, Nueva Ecija. Farmers in the province had not expected Typhoon “Nona” to bring as much rain as it did. NIÑO JESUS ORBETA

CABANATUAN CITY—Virgilio Santaygillo stood helpless when rampaging floodwater swept away hundreds of his newly planted papaya in his farm across the upper Pampanga River in Cabu village here.

The 51-year-old farmer said all he could do was flee to higher ground when Typhoon “Nona” dumped rains on Wednesday. The trees he lost were supposed to have replaced the fruit-bearing papayas which Typhoon “Lando” destroyed in October.

Santaygillo said he did not lose hope like his fellow farmers and used his savings to plant new crops, after losing what could have given them a happy Christmas celebration to Lando’s rains.

He said Nona’s wrath has not dissuaded him from planting a third set of crops. “Let’s move forward, plant again and hope the third attempt will bear us fruit,” said his wife, Merly.

Floods are not new to Cabu, one of the first communities to suffer each time a storm blows their way.

Rina Sarenas, a Cabu resident who tends to a citrus farm, said, “I prayed hard for the rain to stop. I promised to complete this year’s Simbang Gabi (dawn Masses) and the rain stopped,” she said.

The PDRRMC has not released estimates of damage on agriculture and infrastructure.

The flash floods forced the evacuation of 12,366 families (48,296 people) from Nueva Ecija’s 21 towns and cities. Most of these families had not expected Nona to blow through the province.

A landslide in Cadaclan village in Pantabangan town destroyed four houses on Thursday, according to Pascua. The council, he said, was also verifying a report that one of the residents was missing.

Flooding triggered by Nona’s rains struck at the worst time for Emerito Almeda of Barangay Calabasa in Gabaldon town.