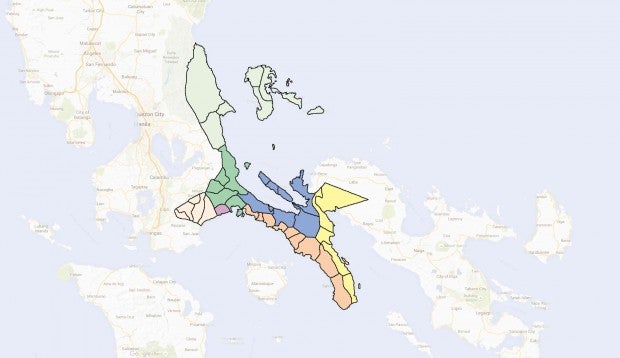 MAP shows the proposed redistricting in Quezon province with existing and new districts to be created if a measure being pushed by the PDC becomes law. ERNIE SAMBO

LUCENA CITY—Quezon has four congressional districts, but the Provincial Development Council (PDC) is pushing for three more, which its chair, Gov. David Suarez, believes will hasten the development of the province.

Suarez’s father, former House minority leader Rep. Danilo Suarez, was expected to file the measure in the House seeking to form the new districts once he reclaims his seat. He is running unopposed in Quezon’s third congressional district in next year’s elections.

In a phone interview, the returning lawmaker expressed full support for the proposal. “It’s about time to create additional districts to hasten the progress and development of the province,” he said.

Governor Suarez first announced the plan during a visit to Catanauan town on Nov. 20, provincial information officer Janet Buelo said in a statement.

The local chief executive heads the PDC, the highest policymaking body in Quezon. Comprising the council are the four congressional representatives, municipal mayors, members of the provincial board and representatives of nongovernment organizations.

Under the proposal of the PDC, the new seven districts will be:

Lone district—Lucena City (to separate from the current second district)

Suarez said the PDC position paper would be disseminated all over the province for discussion.

Lucena Mayor Rhoderick Alcala has also declared support for the proposal. “But it needs more serious discussion and study,” he said in a phone interview.

He wanted to clarify the status of Lucena as a highly urbanized city on whether it could still vote for provincial posts as a separate district. City voters currently choose those who occupy provincial and second district seats.

Former Rep. Lorenzo “Erin” Tañada III, who is seeking to regain his seat in the fourth district, urged the proponents to conduct further study and consultations in the barangay. “It still has a long way to go, but I don’t mind the creation of new district,” he said in a text message.