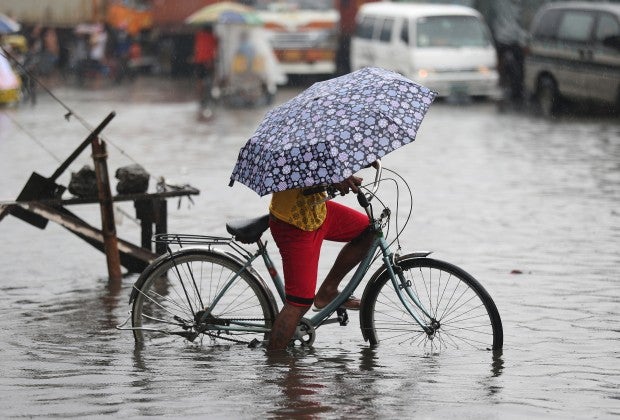 A man tries to bike along a flooded street caused by heavy rains from Typhoon “Nona” in Navotas City on Wednesday, Dec. 16. AP

The Department of Health (DOH) has advised the public to be cautious of the common illnesses that may occur during the holidays due to the cold rainy weather.

​For those who usually go out of their homes at early hours of the morning to attend the dawn Masses or “Simbang Gabi” or stay late at night for parties, DOH advised them to wear appropriate clothing as protection against the cold weather especially for children and elderly.

However, people who are already sick with fever, colds, or cough are advised to immediately seek medical attention and avoid crowded places in order to avoid complications.

“The cold weather usually triggers respiratory problems unless appropriate preventive measures are taken, especially in areas affected by Typhoon ‘Nona.’ Take care of yourself and your family against changes in temperature. Children and adults may become vulnerable to cough, colds, and fever,” Health Secretary Janette Garin said in a statement.

She explained that personal hygiene and hand washing were key to preventing these illnesses.

“People who are staying in evacuation centers are encouraged to wash their hands with clean soap and water before preparing food and before and after eating. Also, wash your hands after using the comfort room,” she said.

She also suggested boiling water for at least two minutes before drinking.

“Breastmilk is the best and safest food for babies,” she added.

Infant formula is not allowed for donation to typhoon victims since drinking water needed to prepare milk is unreliable in times of emergencies and calamities.

Donating such is also in violation of the rules of the Milk Code, a law that promotes breastfeeding.

In areas affected by floods, Garin warned residents against wading in floodwater, saying it may be contaminated and could cause leptospirosis.

“But if it can’t be avoided, wear boots, and immediately wash the exposed body parts with clean water and soap,” she said.

The Code White Alert level puts all hospital personnel on standby for deployment and augmentation as the need arises for additional medical and other services. RC

Read Next
Orange rainfall warning up in Metro Manila, nearby areas
EDITORS' PICK
‘FPJ’s Ang Probinsyano’ officially ends after nearly 7 years
Red-tagged green activist recalls imprisonment
House energy committee chair Arroyo bats for cheap electricity
Authors unbowed after gov’t ‘purge’ of books
Powered by style, innovation and passion
A laptop that maximizes your WiFi so you can maximize your productivity
MOST READ
Arjo Atayde reveals proposal to Maine Mendoza was ‘more than a year’ in the making
‘FPJ’s Ang Probinsyano’ officially ends after nearly 7 years
Pagasa: Cloudy Saturday with possible rain showers; LPA spotted outside PAR
Angelica Panganiban, Camille Prats recall ‘trauma’ of being called out for weight gain in ‘G-mik’
Don't miss out on the latest news and information.