Orange rainfall warning up in Metro Manila, nearby areas 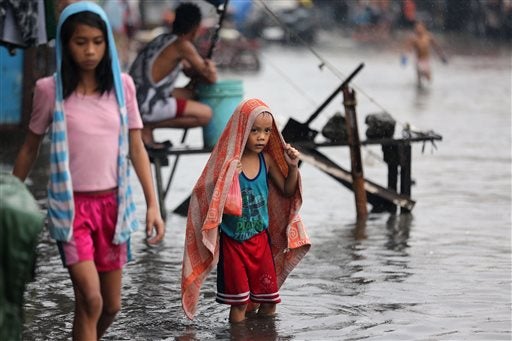 A Filipino boy uses a towel to cover himself from rain caused by Typhoon Melor as he crosses a flooded street outside their homes in suburban Navotas, north of Manila, Philippines on Wednesday, Dec. 16, 2015. AP FILE PHOTO

The state weather bureau on Saturday issued an orange rainfall warning in Metro Manila and its nearby provinces, which means flooding is threatening in the affected areas.

When an Orange rainfall warning is issued, this means 15 to 30 millimeters of rainfall is expected in the next two hours.

Yellow warning level is still raised in Batangas, Bataan, Bulacan and the rest of Quezon.

This means flooding in the low lying areas of the said provinces is expected.

Meanwhile, Pagasa said light to moderate with occasional heavy rains may persist in southern Zambales and portions of Pampanga for two to three hours.

Pagasa earlier said that the rains and thunderstorms are brought by a low pressure area (LPA), which is formerly tropical depression “Onyok.” IDL