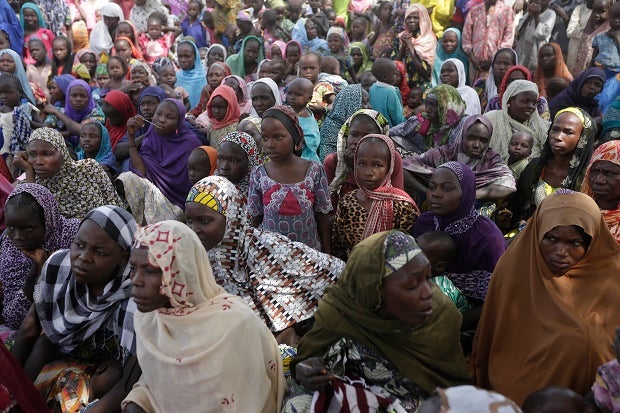 Women and children displaced by Boko Haram attacks are seen at a Furore camp in Yola, Nigeria, Tuesday, Dec. 8, 2015. The refugees claim they were chased out of their villages by Cameroon troops, who crossed the border into Nigeria, killing and pillaging and ordering people to abandon their villages, according to verbal accounts from many survivors arriving at the refugee transit center after walking for days. AP Photo

Though no official death toll was released, at least a dozen members of the Islamic Movement of Nigeria (IMN) were killed in confrontations with the army during a religious procession last week in the northern city of Zaria.

IMN leader Ibrahim Zakzaky was seriously wounded and arrested by the army while his number two was killed during the clashes. The military was forced to put out a denial after rumours spread that Zakzaky’s wife died in custody.

The violence mirrors the bloody beginning of the Boko Haram insurrection in 2009, when the former leader of the Sunni militant group was executed in police custody and the sect took up arms against the Nigerian government.

READ: More than 30 dead as carnage returns to northeast Nigeria

Nigeria’s highest Muslim authority, the Sultan of Sokoto, on Monday urged the authorities to show “restraint.”

“The past, with cataclysmic consequences that Nigeria is yet to recover from, should not be allowed to repeat itself,” he added.

Battling Boko Haram is a priority for Nigeria’s President Muhammadu Buhari, who has vowed to end the insurgency that has claimed 17,000 lives.

Boko Haram has shifted its strategy from raiding villages to relying on deadly bomb attacks in its quest to overthrow the government and create a hardline Islamist state in the northeast of the west African nation of some 170 million people.

Zakzaky, who founded IMN in the 1980s, has been monitored by Nigerian security forces for years on suspicion that he is trying to create an independent Shiite state.

As a defiant preacher in the late 1970s, he described the country as being run by thieves.

“The IMN attracts impoverished Muslim youths by preaching defiance of Nigeria’s secular authorities and offering a social infrastructure that is not provided by the state,” said Malte Liewerscheidt, Africa analyst at Verisk Maplecroft, a research and investment firm.

“Like other Shiite movements around the world, the IMN enjoys political and financial support from the Shia regime in Iran,” Liewerscheidt said.

The army says the hardline rhetoric boiled over into violence in Zaria, with the Shiite worshippers allegedly attacking the convoy of army chief Yusuf Buratai—a claim denied by IMN.

Soldiers attacked and destroyed a mosque, while Zakzaky was severely injured and his house was destroyed.

The total toll of the clashes, which continued between soldiers and hundreds of Shiite faithful for two days, is unknown, but it is likely to amount to dozens of deaths, according to testimony gathered by AFP.

“Whilst the final death toll is unclear, there is no doubt there has been a substantial loss of life at the hands of the military,” said M.K. Ibrahim, director of Amnesty International in Nigeria, who called for a “impartial investigation” into the Zaria events.

“Since Nigeria’s security forces are ill-equipped and trained to deal with riot control, the escalation of a local confrontation with the IMN was just a matter of time,” said Liewescheidt.

“The risk of escalation will be compounded if the military response spirals out of control and if due process is ignored in the handling of Zakzaky and his followers who are in custody.”

However, not everyone sees IMN as a nascent insurgency.

“It is important to note that Zakzaky’s Shiite followers would find little affinity with Boko Haram’s ultraconservative Sunni fighters,” he said. “However, the personal cult around Sheikh Zakzaky has been a source of tension.”

“They are small in numbers and somewhat isolated as a grouping, limiting prospects for an emergent insurgency parallel to that of Boko Haram,” said Barclay.