UN seizes on Syria plan as best hope for ceasefire 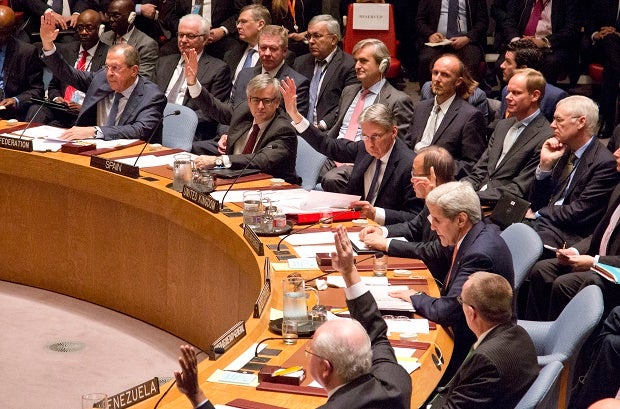 A gathering in the U.N. Security Council of foreign ministers lead by U.S. Secretary of State John Kerry vote on a draft resolution concerning Syria, Friday, Dec. 18, 2015 at U.N. headquarters. U.N. Security Council members have unanimously approved a U.N. resolution endorsing a peace process for Syria including a cease-fire and talks between the Damascus government and the opposition. AP Photo

The US and Russian initiative, which emerged from talks with a 17-nation group, foresees a rapid ceasefire in the almost five-year-old conflict, perhaps as early as next month.

If the plan brings Bashar al-Assad’s regime to the table with the armed opposition, it will allow Russian and US-led forces to focus their firepower on the Islamic State of Iraq and Syria (ISIS) group.

The Security Council met Friday after the latest round of talks by the International Syria Support Group, which gathered in New York to renew its push for peace.

UN Secretary General Ban Ki-moon welcomed “the first resolution to focus on the political path to resolving the crisis. This marks a very important step.”

Attention now turns to Moscow and Riyadh, as Russia pressures Assad’s regime to agree to a ceasefire and Saudi Arabia wrangles the opposition to form a negotiating team.

The United States and Arab allies remain convinced Assad must leave office as part of the process, but his ally Moscow insists this is a decision for the Syrian people.

The resolution itself does not touch on this vital issue.

“Only a Syrian-led, inclusive dialogue can put an end to the untold suffering of the Syrian people,” Russian Foreign Minister Sergei Lavrov warned the council.

Nevertheless, Kerry—who has already “agreed to disagree” with Moscow on Assad’s fate—said the vote would act as a springboard for forging ahead with peace talks.

He emphasized that victory over the ISIS group, also known by the Arabic acronym Daesh, must pass through a peaceful settlement in the broader Syrian civil war.

“We know that Daesh can never be allowed to gain control in Syria, so we have a global imperative here to deal with a terrorist entity but also to end the civil war,” he said.

“Purely as a matter of reality, if the war is to end it is imperative that the Syrian people agree to an alternative in terms of their governance,” he said.

Kerry said that most ISSG members agreed that Assad would have to go, and many said so, notably France.

“There must be safeguards regarding the exit of Bashar al-Assad,” declared Foreign Minister Laurent Fabius.

“How could somebody bring together a whole people when he has massacred so many?”

The resolution enshrines the plan developed by the ISSG countries in a series of meetings in Geneva and Vienna.

It calls for the Syrian government and the opposition to begin a ceasefire and talks on a political transition with a target of early January 2016.

Within six months they should agree on an “inclusive transitional governing body with full executive powers,” and within 18 elections should be held for a new government.

More than 250,000 people have died since Syria’s conflict erupted in March 2011, and millions more have fled their homes.

Friday’s New York talks were the first by the ISSG since Saudi Arabia gathered a coalition of Syria rebel groups to form an opposition negotiating team.

Jordan’s foreign minister presented a draft list of “terrorist” groups that the ISSG parties will agree to exclude from the talks.

This would include, but may not limited to, the ISIS group and the Al-Qaeda-linked Nusra Front.

“The initial work has been done. Now I think that there will be follow-up meetings,” said Nasser Judeh, adding that countries had submitted between 10 and 20 names each.

And it demanded that Russia halt its own air strikes as part of that truce.

Najib Ghadbian, the SNC’s envoy to the United Nations, said opposition groups need “a month or so” to prepare for the political talks that would begin in tandem with a ceasefire.

And, on the eve of the UN talks, Assad warned in an interview with Dutch television that misguided efforts to bring about regime change would make the conflict “drag on.”

Assad turned sarcastic when asked whether he was comforted that Washington’s stance on his departure had seemingly softened.

“I was packing my luggage. I had to leave, but now I can stay,” he joked.

The European Union, the Organization of the Islamic Conference and the Arab League are also represented.