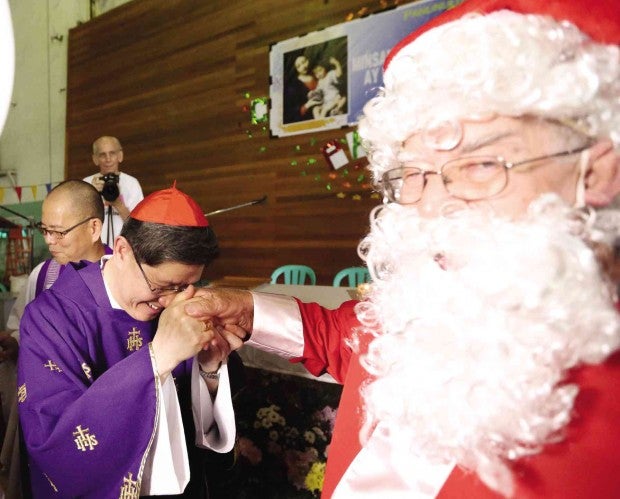 CHRISTMAS WISHES Even Archbishop Luis Antonio Cardinal Tagle (center) needs a Santa Claus, if only to help underprivileged children (left photo) get what they want for Christmas. Their wishes were written on white balloons that were later blessed by the cardinal. Tagle and Santa met the children at a pre-Christmas event at Pamantasan ng Lungsod ng Maynila on Friday. PHOTOS BY MARIANNE BERMUDEZ

My mouth shall be filled with your praise, and I will sing your glory!

There was a man of Zorah of the tribe of Dan, called Manoah. His wife could not bear children. The angel of Yahweh appeared to this woman and said to her, “You have not borne children and have not given birth, but see, you are to conceive and give birth to a son. Because of this, take care not to take wine or any alcoholic drink, nor to eat unclean foods from now on, for you shall bear a son who shall be a Nazirite of Yahweh from the womb of his mother. Never shall his hair be cut for he is consecrated to Yahweh. He shall begin the liberation of the Israelites from the Philistine oppression.”

The woman went to her husband and told him, “A messenger of God who bore the majesty of an angel spoke to me. I did not ask him where he came from nor did he tell me his name.

But he said to me: ’You are to conceive and give birth to a son. Henceforth, you shall not drink wine or fermented drinks, nor eat anything unclean, for your son shall be a Nazirite of God from the womb of his mother until the day of his death.’

The woman gave birth to a son and named him Samson. The boy grew and Yahweh blessed him.Then the Spirit of Yahweh began to move him when he was in Mahane Dan between Zorah and Eshtaol.

In the days of Herod, king of Judea, there lived a priest named Zechariah, belonging to the priestly clan of Abiah. Elizabeth, Zechariah’s wife, also belonged to a priestly family. Both of them were upright in the eyes of God and lived blamelessly in accordance with all the laws and commands of the Lord,but they had no child. Elizabeth could not have any and now they were both very old.

Now, while Zechariah and those with him were fulfilling their office, it fell to him by lot, according to the custom of the priests, to enter the sanctuary of the Lord and burn incense. At the time of offering incense all the people were praying outside; it was then that an angel of the Lord appeared to him, standing on the right side of the altar of incense. On seeing the angel, Zechariah was deeply troubled and fear took hold of him.

But the angel said to him, “Don’t be afraid, Zechariah, be assured that your prayer has been heard. Your wife Elizabeth will bear you a son and you shall name him John. He will bring joy and gladness to you and many will rejoice at his birth.

This son of yours will be great in the eyes of the Lord. Listen: he shall never drink wine or strong drink, but he will be filled with holy spirit even from his mother’s womb. Through him many of the people of Israel will turn to the Lord their God. He himself will open the way to the Lord with the spirit and power of the prophet Elijah; he will reconcile fathers and children, and lead the disobedient to wisdom and righteousness, in order to make ready a people prepared for the Lord.”

Zechariah said to the angel, “How can I believe this? I am an old man and my wife is elderly, too.” The angel replied, “I am Gabriel, who stands before God, and I am the one sent to speak to you and to bring you this good news! My words will come true in their time. But you would not believe and now you will be silent and unable to speak until this has happened.”

When his time of service was completed, Zechariah returned home and some time later Elizabeth became pregnant. For five months she kept to herself, remaining at home, and thinking, “What is the Lord doing for me! This is his time for mercy and for taking away my public disgrace.”

This Gospel is precious in understanding Jewish worship and to enter into the spirit of Advent through the story of Zechariah and Elizabeth. In the temple there were two sacred rooms: the Holy and the Holy of Holiest. The latter was reserved for the High Priest, during the Feast of Atonement. In the Holy there was the altar of incense, and the priests entered there twice a day to offer the sacrifice of incense (Ex 30:7-8). The faithful stayed praying outside.

For the Old Testament fecundity was blessing, and sterility, malediction.

Zechariah and his spouse, both belonging to a priestly family and irreproachable in the law of God, were without child and already old.

Therefore, the presence of Gabriel at the right side of the altar and his message of the future maternity of Elizabeth was absolutely extraordinary and filled the priest with fear. His words were the prophetic description of John’s mission as forerunner of the Messiah. The objection of Zechariah and his muteness complete the scene. The word of the Lord was utterly fulfilled.

So, we are introduced to the close expectation of the Savior prefigured by the glorious figure of John who prepares the way to Jesus. Let us be attentive and faithful.