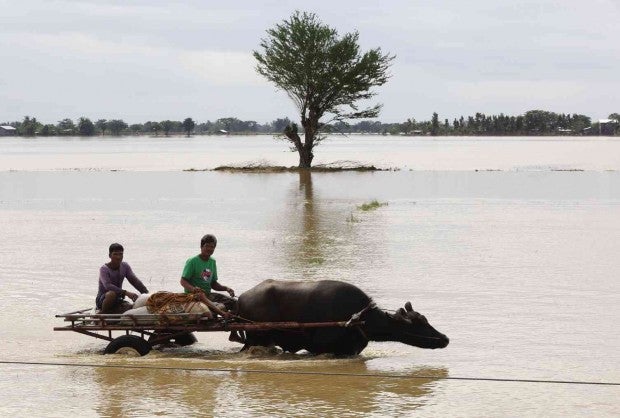 ALL-WEATHER VEHICLES With downpour from Typhoon “Nona” washing away roads and rice fields, residents in Barangay Rajal Sur in Santa Rosa, Nueva Ecija province, rely on carabao power to get them to their destinations. NIÑO JESUS ORBETA

Rains dumped by Typhoon “Nona,” which has weakened into a tropical storm, have filled up dams in northern and central Luzon to their spilling levels, threatening to submerge more coastal villages, officials said on Thursday.

On Thursday, Cabanatuan Mayor Julius Cesar Vergara said the city had been placed under a state of calamity due to the floods.

As Nona (international name: Melor) steadily weakened and dissipated at sea off Zambales on Thursday, Tropical Depression “Onyok” is expected to make landfall on Friday evening on the Caraga region, the northeastern part of Mindanao, according to the weather bureau.

Onyok was spotted 515 kilometers east of Hinatuan, Surigao del Sur, as of 4 p.m. Thursday with moderate to heavy rains within its 100-km diameter, according to the Philippine Atmospheric Geophysical and Astronomical Services Administration (Pagasa). 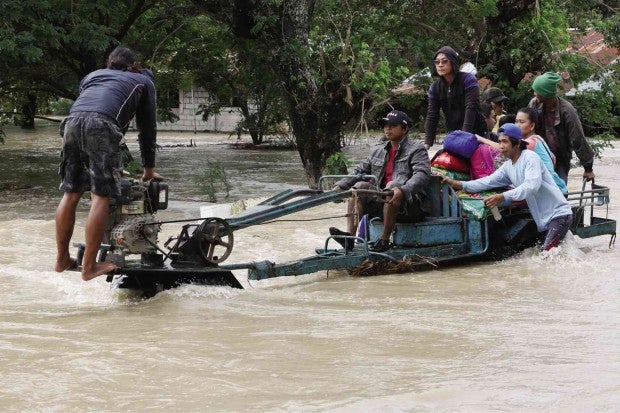 In La Paz, Tarlac province, the “kuliglig” (tractor) is reinvented as a ferry, as it transports commuters across the flooded plains. NIÑO JESUS ORBETA

The death toll from Nona in two regions of southern Luzon has risen to 15, according to disaster and health authorities in Bicol and Mimaropa regions.

As of Thursday, six provinces in southern Luzon were placed under a state of calamity: Sorsogon, Masbate and Albay in Bicol; and Oriental Mindoro, Occidental Mindoro and Romblon in Mimaropa (Mindoro, Marinduque, Romblon, Palawan). Electricity was still down in these areas, except Albay.

The Department of Agriculture placed damage to farms at P732.59 million as of yesterday, mostly vegetables and rice crops.

In Mimaropa, 13 deaths were reported: seven in Oriental Mindoro, one in Occidental Mindoro and three in Romblon, according to reports from the Oriental Mindoro Provincial Disaster Risk Reduction and Management Council (PDRRMC) and the Office of Civil Defense (OCD) in Mimaropa.

In Bicol, there were six deaths, according to the Department of Health (DOH) and the Philippine National Police: two in Sorsogon, three in Masbate and one in Albay.

One fatality was reported in Albay despite the “zero casualty” claim of the PDRRMC because DOH-Bicol recorded Allan Padilla as an “indirect casualty” of the typhoon.

Padilla died around 11 a.m. of Dec. 14 in Bangkilingan, Tabaco City, after he was electrocuted and fell while dismantling a lighted signage of a beauty salon.

A DOH-Bicol report said two died in Sorsogon—Violeta Habla, 70 and her granddaughter Editha Habla, 11—when a tree fell on their house in Boton, Casiguran, on Dec. 14; and two in Masbate, both on Dec. 14—a man in Barangay Pasig, Claveria, Masbate who was hit by a scaffolding, and Rey Garamya, 40, who was hit by an uprooted tree in Jacinto Masbate. 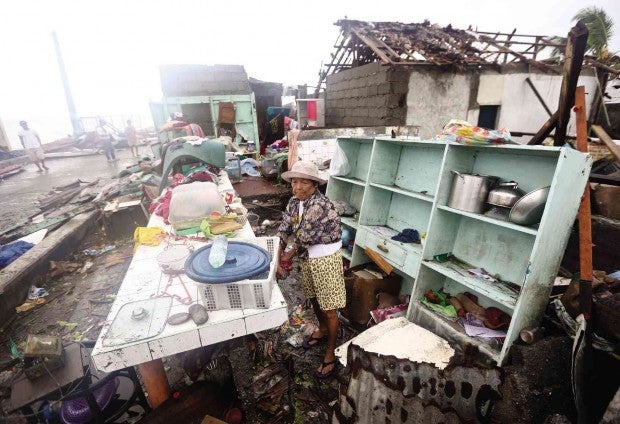 HOME WITHOUT WALLS Sylvia Nambio, 73, wrings out the rainwater from clothes soaked by heavy rains from Typhoon “Nona.” The typhoon’s powerful winds also blew off the roof and walls of her home in Barangay Zone 1, Pinamalayan, Oriental Mindoro province, one of the hardest-hit provinces. Nambio and a granddaughter escaped the typhoon’s wrath by hiding inside their concrete bathroom. LYN RILLON

The list of Masbate fatalities did not include the two fishermen from Claveria town whose bodies were found in a fishing boat that drifted into the waters off Mulanay, Quezon province on Thursday.

Four fishermen, two of them dead and two others barely conscious, were found in the fishing boat by residents near the shore of Barangay Sta. Rosa, Mulanay, around 5 a.m., said Senior Supt. Ronaldo Genaro Ylagan, Quezon police chief.

The fatalities identified as Efimaco Yanson and Ferdinand Bujaue. The survivors, Ramier Bujuae, the brother of Ferdinand, and Rodrigo Lampago Cabaqui, told police they were from Barangay Ababang Baybay, Claveria, Masbate.

Insp. Liezl Abenilla, Mulanay police chief, said the survivors told police that their fishing boat were already close to the shore of Claveria on Tuesday when it was pushed back to the sea by strong waves spawned by Nona.

“According to the survivors, the boat drifted for three days on high seas,” Abenilla said.

Residents of Barangay Isidro, also in Mulanay, rescued another survivor on Wednesday night, identified as Ernie Concepcion Araneta. Aside from the two dead found in the boat, the survivors reported that another dead fisherman was left behind in the vicinity of Burias Island, according to Abenilla.

At least 34,143 persons (7,972 families) were still in evacuation centers in the provinces of Romblon, Oriental Mindoro and Occidental Mindoro, said the OCD-Mimaropa report.

So far, the Department of Social Welfare and Development has released P43,404,386 to affected citizens in Calabarzon, Mimaropa, Bicol and Eastern Visayas.

In Sorsogon, displaced families in San Vicente, Irosin, were pleading for immediate assistance after Nona destroyed their houses and properties.

Adrian Parades, 42, said he lost his house at the height of the typhoon on Dec. 14 to a storm surge that rose 10 meters. “We thought it was the end of the world for us,” he said, recalling he, his wife and two young children only managed to survive by holding tightly unto each other.

Barangay chief Jerry Espladon said 146 families in his coastal village lost their houses and all their belongings to the storm.

“We are appealing for help, most particularly food, clothing and shelter, will be very grateful and thankful for the assistance you’ll extend to us,” he said.

Because of continuous rains, National Power Corp. on Thursday opened Gate 2 of Angat Dam in Bulacan by 0.5 meter, releasing 60 cubic meters per second as water rose to 212.94 meters above sea level (masl), according to Josefina Timoteo, chair of the Regional Disaster Risk Reduction and Management Council. Angat Dam’s spilling level is 212 masl.

Bustos Dam, which receives Angat Dam’s spillover water, released water at 6 p.m. on Wednesday, ahead of the Angat Dam discharges, to cushion its impact on low-lying provinces.

A cubic meter of water is equivalent to 1,000 liters, or about five drums of water spilling out every second.

So were riverside villages in Arayat, San Luis, San Simon and Candaba towns in Pampanga and San Miguel and San Ildefonso towns in Bulacan.

Twelve villages in Bulacan were flooded, 39 in Nueva Ecija, and six in Aurora province.

Aurora was isolated as portions of the Nueva Ecija-Aurora Road and the Dinadiawan-Madella Road were either flooded or hit by landslides.

Pantabangan Dam in Nueva Ecija, with water elevation at 208.06 masl, was still far from its 221 masl spilling level. But floods rendered roads in Cabanatuan and Palayan cities impassable to light vehicles.

Classes were suspended in 82 towns and cities in seven Central Luzon provinces due to strong rains or floods.

The Department of Public Works and Highways reported that 18 road sections were not passable to vehicles because of floods and landslides.

In Isabela, Magat Dam released 264 cubic meters per second of water to the Magat River while its reservoir level was still at 190.77 masl.

On Wednesday, Ambuklao Dam opened its spillway gate at 8 p.m. while Binga Dam released water at 3 p.m., spilling water at the rate of 60 cubic meters per second.

Onyok is moving west at a speed of 15 kilometers per hour and wind strength of 55 kph as of 4 p.m. It is expected to weaken once it hits the mountains in the eastern part of Mindanao.

Classes suspended in Mindanao provinces due to Onyok