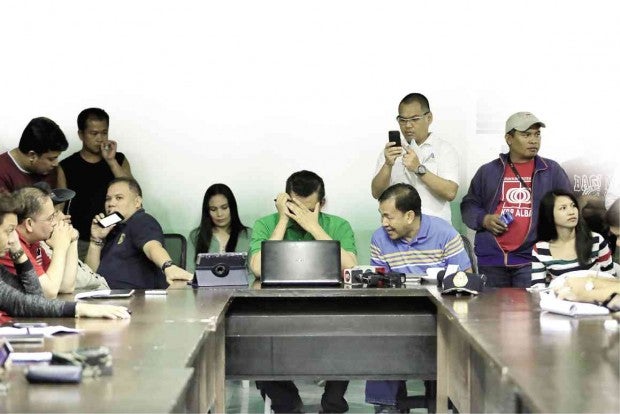 LEGAZPI CITY, Philippines—The case of a 45-year-old man, who died while preparing for the onslaught of Typhoon “Nona,” is testing the definition of a storm casualty by authorities of Albay province and the province’s claim to fame itself—zero casualty during disasters.

Is Allan Padilla, who died after being electrocuted as he tried to remove a beauty salon sign in Tabaco City before Nona slammed the Bicol region on Dec. 14, a casualty of the storm or not?

Or is his case an example of how officials use their definition of a storm casualty to keep the province’s zero casualty record untainted?

“We won’t accept it because the definition is wrong,” said Cedric Daep, head of the Albay Public Safety and Emergency Management Office and a member of the PDRRMC, on the listing of Padilla as a Nona casualty.

“The definition of a disaster casualty, for me, is one who died because of flood, landslide, storm surge, strong wind or mudflow,” Daep said. “He (Padilla) died around 11 in the morning. The storm hit Bicol in the afternoon,” he added.

The NDRRMC, in a presentation to the Department of the Interior and Local Government on Wednesday, listed Padilla as a Nona casualty virtually dousing cold water on the Albay provincial government’s celebration of another zero casualty goal achieved.

Leyte Rep. Martin Romualdez, who was here on Thursday, said this has also been an issue when Supertyphoon “Yolanda” slammed into Leyte in 2013.

According to Romualdez, a native of Tacloban City which was considered ground zero of Yolanda, Leyte residents who died before Yolanda made landfall were not counted as storm casualties and unable to receive calamity assistance from the government.

The culprit, Romualdez said, is the zero casualty goal that local and national government agencies set and which leads to the refusal of these agencies to recognize those who were clearly storm victims who died before the disaster struck their communities.

This is now happening to Padilla, whose family is not entitled to benefits because, by the definition of Albay officials, he is not a storm casualty.

Soon after Nona passed, Gov. Joey Salceda, along with Daep, announced that Albay has again achieved its zero casualty goal.

Salceda attributed this to the provincial government’s massive preemptive evacuation plan that got about half a million residents out of harm’s way.

Daep, reached Wednesday night, said he would inform the NDRRMC that Padilla should not be listed as a storm casualty.

“If they won’t agree, I can’t do anything. But we will stick with what we really have. When (Padilla) died, the typhoon was still in the Pacific Ocean,” said Daep in a phone interview.