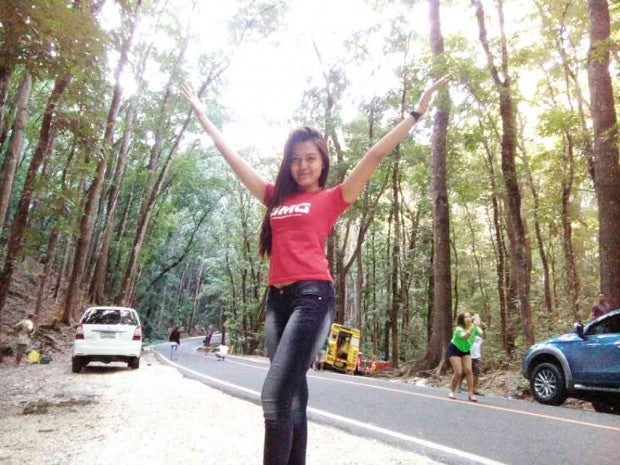 VISITORS, like this woman, take selfies with a mahogany forest in Bohol province as background, unmindful of the risks of stopping in the middle of the road with no signs telling motorists to slow down. LEO UDTOHAN/INQUIRER VISAYAS

LOBOC, Bohol—A police officer has urged local tourism officials to put up signs and designate photo stops at the famous man-made forest in this province after a tourist met an accident while taking a selfie with the forest in the background along the highway.

Insp. Joseph Lopena, police chief of Loboc town, said the accident involving a female tourist on Dec. 5 should serve as a reminder of the need to designate photo stops on the highway near the forest.

The man-made forest, a two-kilometer stretch of densely planted mahogany trees at the border of Loboc and Bilar towns, was part of a bigger reforestation project in 1947 started in response to deforestation.

The forest is along the highway that leads to the Chocolate Hills in Carmen town.

On Dec. 5, a 29-year-old female tourist from Muntinlupa City was hit by a car while taking a selfie.

Lopena said the tourist was sitting in front of a car to take selfie on the side of the highway and didn’t notice an approaching Toyota Innova that eventually hit her.

Lopena said the tourist suffered only minor bruises and no case was filed after the tourist and the Innova driver reached an amicable settlement.

“We can never completely bar people from stopping their cars when they want to take a selfie or photo of anything that catches their attention,” he said.

Cristopher Boncales, 40, a tour guide of 22 years, told Inquirer that the man-made forest is one of the seven major tourist spots in Bohol.

The stop at the man-made forest, however, is optional, according to Boncales.

He said if tourists are “manageable,” guides usually offer to stop at the man-made forest to allow tourists to take pictures.

Danger also lurks inside the forest, however, said Boncales. He recalled an incident four years ago during which some of his guests were almost bitten by two cobras when they were allowed to explore the forest.

Lande Lawangon, tour driver, said visitors love to take photos in the middle of the highway with the forest as background.

“I get scared sometimes but I always tell them to hurry. Most of the time, I volunteer to take photos for my guests when there are no vehicles passing by. Five to 10 minutes to stay in the area will do,” said Lawangon.

He said signs telling motorists to slow down when passing by the forest could help.

Picking up the pieces in Bohol