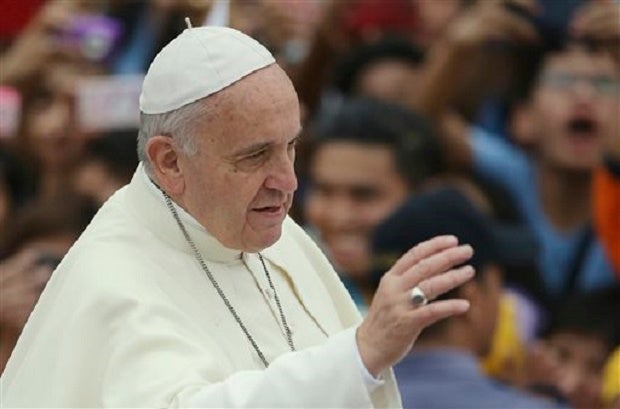 Pope Francis waves during the “Meeting with Families” at the University of Santo Tomas in Manila, Philippines on Sunday, Jan. 18, 2015. AP Photo

VATICAN CITY, Holy See—Pope Francis on Wednesday urged Slovenian politicians to stand up for family values, four days before the country votes in a referendum on gay marriage.

Without explicitly mentioning the vote, Francis told a group of Slovenian pilgrims that he encouraged “everyone, especially those with public responsibility, to support the family, a structural reference point for the life of society.”

Slovenians go to the polls on Sunday to decide whether to implement or scrap a law allowing gay marriage which was adopted by parliament in the largely Catholic country in March.

READ: Pope’s family synod: No changes, but everything has changed

The referendum follows a challenge by conservatives who gathered 40,000 signatures in a month for a petition for the issue to be put to a popular vote.

The law will be scrapped if 20 percent of the electorate vote in the referendum and a majority oppose it.

Although Pope Francis is credited with pushing the Church towards a more welcoming approach to homosexuals, he has always been unequivocal in his opposition to same-sex marriage.