Pope’s family synod: No changes, but everything has changed 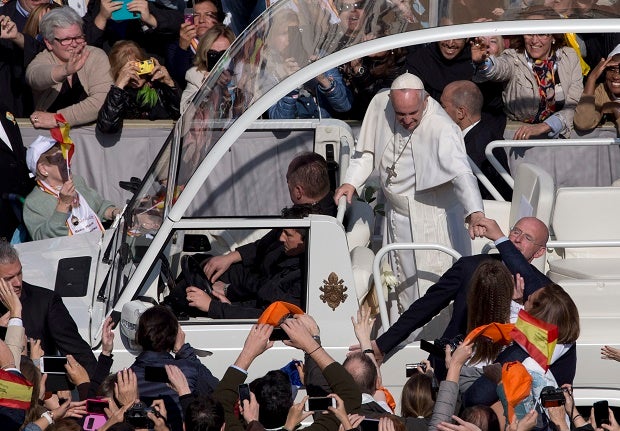 Pope Francis leaves after a canonization ceremony in St. Peter’s Square at the Vatican, Sunday, Oct. 18, 2015. Pope Francis canonized the Catholic Church’s first married couple in modern times on Sunday, declaring the parents of the beloved St. Therese of Lisieux saints in their own right. AP Photo

VATICAN CITY—It’s now quite certain that Pope Francis’ big summit on family issues won’t endorse any changes to church doctrine on the church’s about homosexuality or whether civilly remarried Catholics can receive Communion.

And yet, it seems, everything has changed.

From the crucial role African bishops have played in the debate, to calls to remove “intrinsically disordered” from the church’s language on gays, to the freedom bishops now enjoy to speak their minds on once-taboo issues, Francis’ synod on the family has at the very least shaken up the church for years to come.

And if Francis has his way, there’s more ahead.

Francis delivered a sleeper bombshell of a speech over the weekend kicking off the final week of the synod in which he called for nothing less than a revolution in the concept of the Catholic Church itself. He said it’s not a top-down organization with the pope in charge but rather an inverted pyramid where the summit—the pope—is underneath and in service to the “holy faithful people of God” who are its base.

He called for a “healthy decentralization” of authority on certain problems from Rome to local bishops’ conferences, and said the papacy itself should be rethought, with the pope guiding the church but really just one bishop among many, one Catholic among many.

“It’s a very delicate moment, where you realize that the relationship between the church and the world is at stake,” the Rev. Antonio Spadaro, a Jesuit close to Francis, said as the synod entered its third and crucial week.

The 270 synod “fathers” are hammering out a final document to submit to Francis on Saturday conveying a host of proposals for how the church can better minister to Catholic families today. They will vote paragraph by paragraph on the text, amending what has been a near-universally scorned draft working document.

What Francis does with the final paper is up to him: He can use it as a basis for a document of his own, he can ignore it, or he can publish it as a synod document. During Round One of the bishops’ family meeting last year, Francis not only published the final document in full, he published the three paragraphs that didn’t receive the necessary votes to pass—those that dealt with the vexing issues of ministering to gay Catholics and civilly remarried Catholics.

The key question of Round Two has been how the bishops would pick up those two outstanding issues, after Francis called for a more merciful, less doctrinaire approach.

Francis has shown a far more pastoral attitude to gays, famously saying “Who am I to judge” about a purportedly gay priest. But church teaching holds that while gays themselves should be treated with dignity and respect, homosexual acts are “intrinsically disordered.”

Progressives have sought a new language that is more welcoming and less condemning, but proposals last year to recognize that homosexual unions had some merit were quashed by conservatives. While the final document won’t be known until Saturday, several bishops have said the church’s language towards gays must emphasize that gays like heterosexuals are children of God, regardless of their sexual orientation, and must be welcomed into the church.

On the civil remarriage issue, church teaching holds that unless these remarried Catholics annul their first marriages, they are committing adultery and cannot receive Communion.

Progressives have sought wiggle room, to look at remarried couples on a case-by-case basis, accompanying them on a path of reconciliation that could lead to them eventually receiving the sacraments. Conservatives led by Africans have held fast to doctrine, insisting that Jesus himself taught that a valid marriage is indissoluble.

“I don’t think we’re ever going to get consensus on some of these hot-button issues,” Australian Archbishop Mark Coleridge told reporters Monday. “But was that ever a realistic possibility? I doubt it. The one thing that is certain about next Sunday is that we won’t have finished the task. This journey will continue.”

Indeed, many participants have spoken about the remarkable freedom they now feel to speak about previously taboo topics—encouraged by the Jesuit pope to use the Jesuit spiritual exercise to discern what God really wants from them. That has implications for how bishops at home will deal with pastoral issues, listening to their flock more and perhaps being more creative in their ministry than merely reciting doctrine. And it may well trickle down to ordinary Catholics, called upon to discern in their conscience what God wants from them.

On the first full working day of the synod, Canadian Archbishop Paul-Andre Durocher proposed ordaining women as deacons, to help relieve the priest shortage and give women more roles in the church.

The proposal hasn’t gone anywhere, but the fact that it was even tabled is indicative of a new atmosphere Francis has ushered in, where bishops can speak in total freedom in the protected synod hall, knowing that journalists are kept at bay and that the pope is the guarantor of the church’s unity.

And even after the synod ends, Francis may have more surprises up his cassock sleeve. On Dec. 8, he launches his yearlong “Jubilee of Mercy,” during which he has already given ordinary priests rather than just bishops the ability to absolve women of the sin of abortion.

“We have to understand that we are living an ecclesial process of huge dimensions,” the Jesuit Spadaro told Vatican Radio. “So we shouldn’t be surprised that there are moments of fatigue, of blockage, difficulty and tensions. There’s also the joy that we are creating history together.”