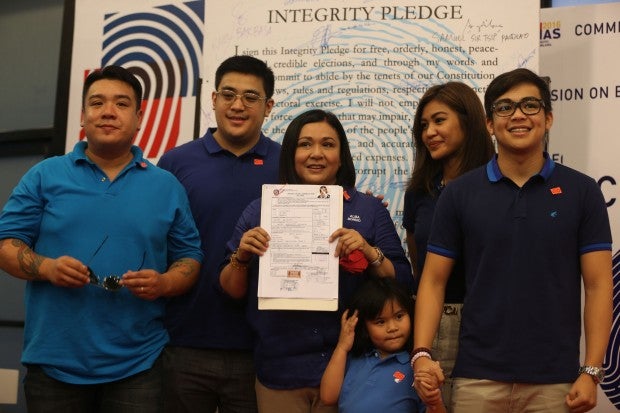 Alma Moreno files her certificate of candidacy with her children at the COMELEC on Wednesday, October 14, 2015.
PHOTO BY EDWIN BACASMAS/PHILIPPINE DAILY INQUIRER

It seems her prayers have worked.

Parañaque councilor and senatorial aspirant Alma Moreno has landed in the top 20 senatorial bets for next year’s polls, according to the results of the latest Pulse Asia survey.

The survey, which was commissioned by ABS-CBN and released on Tuesday, showed Moreno placing in the 18th to 20th place with 15.4 percent of the respondents saying they would vote for her if elections were held during the survey period from Nov. 8 to 15.

Her interview last month with broadcaster Karen Davila on ABS-CBN News Channel’s “Headstart” drew various reactions online, becoming a trending topic on Twitter after netizens made Moreno the butt of jokes and memes.

The interview started when Moreno was asked why she decided to run for the Senate. She replied: “Hindi ko pinlano mag-senador. Dasal lang. Lord, give me a sign. Dasal lang talaga.”

The interview took an uncomfortable turn when the senatorial aspirant was grilled by Davila on her advocacies.

But the law already exists, the host said.

Moreno seemed to raise the white flag when grilled further on her stance on the reproductive health law when she said, “Kailangan pa ba sagutin yan? (Do I need to answer that?)” Davila answered: “Of course, you’re running for the Senate.”

The senatorial aspirant also jokingly suggested that in order to control the population, couples should always leave the lights on at night.

In the said Pulse Asia poll, Sen. Vicente “Tito” Sotto III topped the survey with 72.6 percent of respondents saying they would vote for him. Other notable names in the “magic circle of 12” were: Sarangani representative and Filipino boxing champion Manny Pacquiao, who is at 7th to 10th place, and former Justice Secretary Leila de Lima at 11th to 12th place.

The survey had 1,200 respondents nationwide. AJH