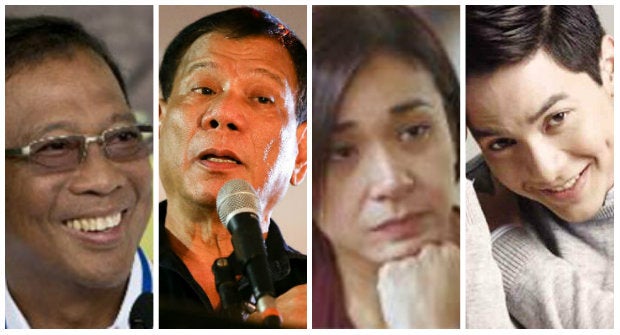 (The only thing I can say about Mayor Duterte is that he is a model local official and a very qualified presidential candidate.)

Asked if he thinks his chances of winning would be affected by Duterte’s decision to run for president, Binay said, “E ‘yun ang kagustuhan ng tao, ating respetuhin (If that’s what the people want, then we will just have to respect it).”

Duterte on Saturday night said that his “candidacy for the presidency is now on the table” following months of a nationwide guessing game whether he would actually run for the top post or not.

Binay also got candid when asked by hosts Karen Davila, Anthony Taberna, Vic de Leon Lima and Gerry Baja to describe using just one word some of his political allies and rivals.

He used “anak” (child) to describe Senator Aquilino “Koko” Pimentel III, “fiction-writer” for Senator Alan Peter Cayetano, and “consultant” for Senator Antonio Trillanes IV. The three lawmakers have been leading the Senate blue ribbon subcommittee investigation on the anomalies he allegedly committed when he was still Makati city mayor.

Asked to describe one of his senatorial bets Alma Moreno, Binay told the hosts to just ask Davila.

Davila’s interview with Moreno became viral last week when netizens ridiculed the actress-councilor’s answers and criticized the broadcaster’s manner of asking her questions.

Binay also gamely answered the question whether he would like his life story be turned into a movie. He said that he would want actor Alden Richards to play him.

Ribbed by the hosts because of the difference of his complexion with Richards’, Binay relented that other ABS-CBN actors may also star as him in his biopic.

“Si Coco Martin. Kung pwede nga lang, si Piolo Pascual na e (Coco Martin (is another choice). But if he is available, Piolo Pascual is also one of my choices),” Binay said in jest.