A NEWLY opened library will take you on a trip down culinary memory lane not only through its collection of books but also through handwritten recipes and personal collections of the country’s renowned chefs.

On the walls of the library are displayed awards and kitchen tools of celebrated chefs that CCA, Manila has produced in the past 19 years.

Susana Guerrero, CCA, Manila founder and The Cravings Group (TCG) president, said the collections showed the “history of the school.”

Some items, donated by CCA, Manila alumni, were “very personal” like a wooden spoon, tasting spoon and rosary.

“Those were the tools that they used in important events. We want to share … beautiful memories,” said Guerrero, who was honored this year for her visionary leadership and excellence by the prestigious Antonin Careme Society.

Among the personal items that Guerrero shared with the library were a Mickey Mouse ice shaver, a grater she received from a Taiwanese ambassador in 1968 and her first wooden spoon.

The ice shaver, which was bought in 1974, is still working, Guerrero said.

When her kids were still young, she would make desserts like halo-halo for them, using the ice shaver, she said.

The grater, which was given by the then ambassador of Taiwan, teaches a valuable lesson on “zero-waste,” which Guerrero is advocating.

“There’s an interesting story behind the grater,” Guerrero said at the inauguration of the library. 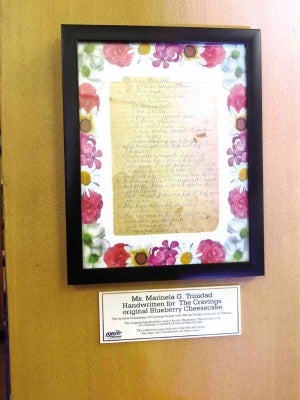 The ambassador invited her to dinner where they were served an unfamiliar side dish.

“We enjoyed the side dish but I didn’t know what it was… So I called the chef, who said you could not do the dish [unless you used] that grater,” Guerrero said.

“You know what it was? It was the part of the cabbage that we throw away, the core…. That’s a lesson in recycling. That was in 1968. From that time on, I did not throw away the (cabbage) core,” she said.

The wooden spoon that is now displayed in the library marked the beginning of Guerrero’s culinary success and passion for cooking.

The other wooden spoon in the library was from chef Gigi Angkaw. It had traveled with her to different parts of the Philippines, throughout the 17 seasons of “Island Flavors” that aired from 2002 to 2007.

Encarnacion said it was because of CCA that he was given the honor of being the first Filipino to have his name on an international cutlery brand. 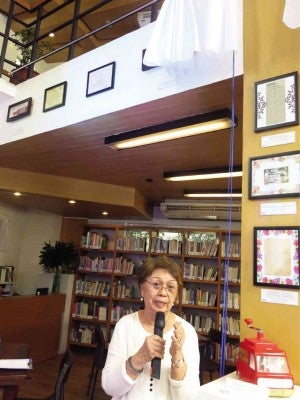 Guerrero tells the story of the Mickey Mouse ice shaver.

By displaying the Sunnex signature collection on the wall, Encarnacion said he wanted to impart the message to the center’s students that the recognition was due to his “sipag at tiyaga (diligence and hard work)” when he was studying at CCA, Manila. Encarnacion is now one of CCA, Manila’s instructors.

Chancellor for education Dr. Veritas Luna said, “We are delighted and honored to be entrusted with these treasured pieces. Not only do these items showcase the extraordinary contributions of the alumni-donors to the culinary profession, they tell how the simplest, most humble beginnings can inspire and lead to great things.”

The mementos, she said, would “fire up the passion and confidence” of future generations of CCA Culinary students.

The LRC is a three-level facility that provides convenient browser-based research. It has 4,000 volumes of print materials and exclusive book collections, a fully equipped kitchen classroom and an audio-visual conference room.

Luna said, “The LRC is just one of the many promising things to come for CCA as it gears up for bigger plans next year when it marks two decades of culinary education leadership.”