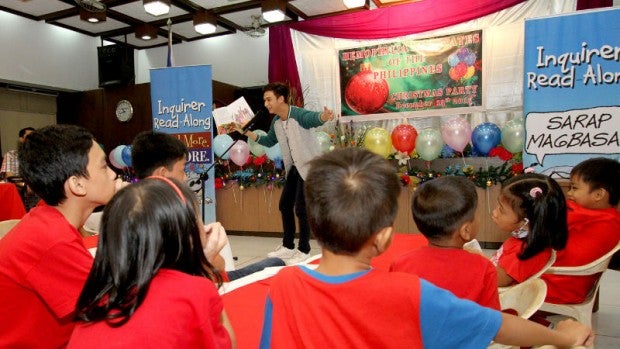 Reader Kyle Vergara of Starstruck reads the story of  ‘Si Isem, sa Bayang Bawal Tumawa’ to Children with Hemophilia and members of Hemophilia Advocates of the Philippines during Inquirer Read-Along session at the National Federation of Women’s Club of the Philippines Building in Malate, Manila. INQUIRER PHOTO / RICHARD A. REYES

EVEN with disabilities, you can go places if you just laugh them off and come out of your shell.

This, in a nutshell, is the lesson from the three stories read to about 15 kids diagnosed with hemophilia, a rare genetic bleeding disorder, during a special Inquirer Read-Along session on Sunday organized with the Hemophilia Advocates of the Philippines (HAP).

Held at the National Federation of Women’s Clubs office in Ermita, Manila, the session featured celebrity Kyle Vergara of “Starstruck,” professional storyteller and teacher Dyali Justo and her daughter Luntian.

Vergara, a first-time storyteller, read “Si Isem sa Bayang Bawal Tumawa,” written by Eugene Evasco and illustrated by John Crisostomo. It is about an outsider who visits a town where everyone is grumpy and ill-tempered because of a rule prohibiting them to laugh.

He enjoyed reading the story as much as the kids were delighted hearing it. “I hope that whenever the kids feel sad, they would just think about Isem,” he said, adding that just like in the story, a collective mood of sadness can be overturned by a single person.

Veteran read-along storyteller Justo read “Ang Madyik Silya ni Titoy,” a story of a boy with disability who uses his imagination so his wheelchair can take him to places one can only dream of. The piece was written by Russell Molina and illustrated by Marcus Nada.

In the story, the boy’s wheelchair is turned into a plane, train and car so he can travel to places. This was made for fun since the kids would mimic the sounds of the vehicles in the story.

“The story gives inspiration that even if we have different physical appearances, we should treat everyone as equal and not limit their capabilities,” Justo said.

Her daughter Luntian participated at the last minute and read “Ang Mahiyaing Manok,” by

Rebecca Añonuevo and Ruben de Jesus. The story is about a shy young rooster who felt out of place among the other roosters because it cannot crow as loud as the others.

Justo said the story was her favorite because it inspired people to let go of their inhibitions. “And it also helps that you have a support system—family and friends that will lift you up,” she added.

“It was a very meaningful experience in time for the Christmas season for me and for my daughter to help the kids in this manner,” she said. “It was also a day of revelation, especially for my daughter who was actually shy to read to an audience on her own. But today she was different.”

The kids, aged 6 to 12, were quiet and shy at the start but eventually gained interest upon hearing the readers tell the inspirational stories.

Eleven-year-old Frix Joaquin was all smiles after the session and said his favorite story was “Ang Madyik Silya ni Titoy” because even if the boy had no legs, he could still travel and see the world.

“Even if you have disabilities, you should never lose hope,” Frix said.

His friend, JC Bautista, 13, said he liked the story about the young rooster. “You should never be shy. Tell the world what you feel,” he said.

Frix, JC and the rest of the children and adults in the session have been diagnosed, or at least have loved ones, with hemophilia, a bleeding disorder due to an insufficient amount of protein in the blood called “clotting factor.” This results in excessive bleeding (internal or external), damaging the organs and tissues in the body.

The event was also a Christmas party organized by HAP founders Andrea Echavez, who suffers from the disease, and Marietta Charvet, who has a 33-year-old son diagnosed with it since he was 4 months old.

They started the group, which has yet to be launched formally, to gather and unite hemophiliacs from other organizations. Their goal is to help patients in their medical and psychosocial needs, raise awareness and seek government support.

“The treatment is really expensive and it could even cost you millions,” Echavez said. “An injection for minor bleeding is P30,000 for a kid and it goes as high as P80,000 per injection for an adult. Sometimes the bleeding won’t stop right away, so you have to repeat until it stops.”

Echavez, a former Inquirer reporter, has a rare type of hemophilia called Von Willebrand Disease, the medication for which is not available in the Philippines. She and her daughter were diagnosed with the disease in Hong Kong in 2006.

Since then, she has been an advocate and volunteer for different organizations.

Their international partners include Project Share and World Federation of Hemophilia, both from North America, which helps them gain access to medicines.

In the Philippines, a bill that aims to put up four treatment centers for hemophiliacs in Metro Manila, Luzon, the Visayas and Mindanao has been filed in the Senate.

The Department of Health also has a National Voluntary Blood Services Program, in which hemophilia patients are beneficiaries, along with leukemia patients.

As of 2005, government records showed that only about 1,000 Filipinos with hemophilia— or 10 percent—had been identified, while over 9,000 remained unidentified and presumed untreated. Of the diagnosed patients, less than 10 percent have received adequate treatment.

Read Next
Muslims decry solon’s comment
EDITORS' PICK
Look Through: The fate of impounded stray dogs
House energy committee chair Arroyo bats for cheap electricity
What to watch out for when selecting a video surveillance solution
23,000 cops to be deployed nationwide for school reopening
Unleash the photographer in you this World Photography Day with vivo smartphones
DOH says COVID-19 cases plateauing, but public shouldn’t be ‘complacent’
MOST READ
Korina Sanchez reunites with former ABS-CBN co-anchors Julius Babao, Cheryl Cosim
Sharon Cuneta asks for prayers for friend in ICU who suffered silent stroke
QC school’s shutdown violated rules – CHEd
Light therapy could be the answer to your sleep problems
Don't miss out on the latest news and information.