LE BOURGET, France—World leaders on Saturday (Sunday morning in Manila) hailed the breakthrough accord approved in Paris by negotiators from 195 nations to stop global warming, offering hope that humanity can avert catastrophic climate change and usher in an energy revolution.

US President Barack Obama led the world in cheering the Paris Agreement shortly after French Foreign Minister Laurent Fabius, the president of the Paris climate talks, banged the gavel to adopt the accord, marking consensus among the negotiators, who stood for several minutes to clap and shout their joy, with some shedding tears of relief.

“This agreement sends a powerful signal that the world is fully committed to a low-carbon future,” Obama said in an address from the White House. “We’ve shown that the world has both the will and the ability to take on this challenge.”

Scientists and leaders said the talks in Paris represented the world’s last, best hope of striking a deal that would begin to avert the most devastating effect of a warming planet.

By approving the accord, nations committed themselves to keep the rise in global temperatures by the year 2100 compared with pre-Industrial Revolution levels “well below” 2C and “endeavor to limit” them even more to 1.5C.

That was the key demand of poor countries ravaged by the effects of climate change and rising sea levels.

The accord also binds nations to limit the amount of greenhouse gas emitted by human activity to the same levels that trees, soil and oceans can absorb naturally, beginning at some point between 2050 and 2100.

“This is truly a historic moment,” United Nations Secretary General Ban Ki-moon said in an interview. “For the first time, we have a truly universal agreement on climate change, one of the most crucial problems on Earth.”

“This text will send signals to civil society, consumers and businesses,” said Hans Joachim Schellnhuber, director of the Potsdam Institute for Climate Impact Research as he mulled the prospects for the world to reach the 1.5C target someday. “It will be up to business, consumers, citizens and particularly investors to finish the job.”

The Paris Agreement ends decades-long rows between rich and poor nations over how to carry out what will be a multitrillion-dollar campaign to cap global warming and cope with the impact of a shifting climate.

With 2015 forecast to be the hottest year on record, world leaders and scientists had said the accord was vital for capping rising temperatures and averting the most calamitous effects of climate change.

Without urgent action, they warned, mankind faced increasingly severe droughts, floods and storms, and rising seas that would engulf islands and coastal areas populated by hundreds of millions of people. 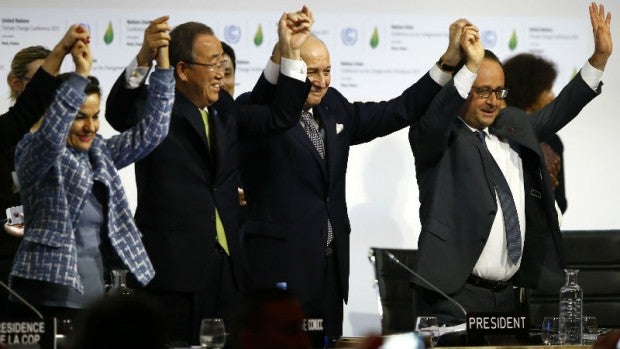 US Secretary of State John Kerry, who led the US negotiations in Paris, called the agreement “a victory for all of the planet and for future generations.”

The crux of the fight entails slashing or eliminating the use of coal, oil and gas for energy, which has largely powered prosperity since the Industrial Revolution.

The burning of those fossil fuels releases invisible greenhouse gases, which cause the planet to warm and disrupt Earth’s delicate climate system.

Ending the vicious circle requires a switch to cleaner sources, such as solar and wind, and improving energy efficiency.

Some nations are also aggressively pursuing nuclear power, which does not emit greenhouse gases.

To meet the targets in the Paris Agreement, emissions of greenhouse gases will need to peak “as soon as possible,” followed by rapid reductions.

The world has already warmed by almost 1C, which has caused major problems in dry developing countries, according to scientists.

British Prime Minister David Cameron said the Paris talks had “culminated in a global deal, with the whole world now signed up to play its part in halting climate change.”

“In other words, this generation has taken vital steps to ensure that our children and grandchildren will see that we did our duty in securing the future of our planet. What is so special about this deal is that it puts the onus on every country to play its part,” he said.

“Today the world gets a lifeline, a last chance to hand over to future generations a world that is more stable, a healthier planet, fairer societies and more prosperous economies. This robust agreement will steer the world toward a global clean energy transition,” he added.

Some environmentalists said the Paris Agreement was a turning point, predicting the 1.5C goal would help to doom the fossil-fuel industry.

“That single number, and the new goal of net zero emissions by the second half of this century, will cause consternation in the boardrooms of coal companies and the palaces of oil-exporting states,” said Greenpeace International chief Kumi Naidoo.

Developing nations had insisted rich countries must shoulder the lion’s share of responsibility for tackling climate change as they emitted most of the greenhouse gases since the Industrial Revolution.

The United States and other rich nations countered that emerging giants must also do more, arguing developing countries now account for most of current emissions and thus will be largely responsible for future warming.

On the crucial financing issue, developed countries agreed to muster at least $100 billion a year from 2020 to help developing nations. But following US objections, it was not included in the legally binding section of the deal.

Ahead of the talks, most nations submitted voluntary plans to curb greenhouse-gas emissions from 2020, a process billed as an important platform for success.

But scientists say that, even if the pledges were fully honored, Earth will still be on track for warming far above safe limits.

In an effort to get countries to scale up their commitments, the agreement will have five-yearly reviews of their pledges starting from 2023.

Nations most vulnerable to climate change lobbied hard for the wording to limit warming to 1.5C.

Big polluters, such as China, India and oil-producing giant Saudi Arabia, preferred a ceiling of 2C, which would have enabled them to burn fossil fuels for longer.

“However, this does not prevent us from marching historical steps forward,” he said. “This indeed is a marvelous act that belongs to our generation and all of us.”

Tuvalu, a Pacific island nation of about 10,000 people at risk of being submerged by rising oceans, celebrated.

“We have saved Tuvalu, and in doing so we have saved the world,” Tuvalu negotiator Ian Fry said.

Hillary Clinton, the Democratic Party’s front-runner for the US presidential race, noted, however, that “the next decade of action is crucial.”

“If we do not press forward with driving clean energy growth and cutting carbon pollution across the economy, we will not be able to avoid catastrophic consequences,” she said. Reports from the wires