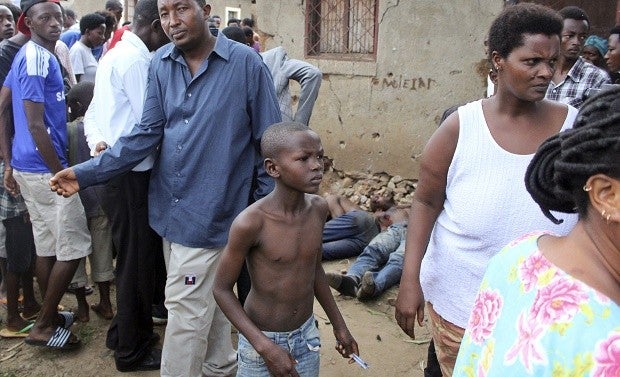 A young boy joins other onlookers at the scene where five dead bodies, seen behind, were found in a street in the Cibitoke neighborhood of the capital Bujumbura, Burundi Wednesday, Dec. 9, 2015. Witnesses say seven people have been killed in Burundi’s capital Wednesday, in violence associated with turmoil over President Pierre Nkurunziza’s extension of his term in office, with one witness saying people dressed in police uniforms pulled five people from their houses in the Cibitoke neighborhood and shot them dead Wednesday morning. AP

BUJUMBURA, Burundi — Witnesses says overnight gunfire and explosions that spilled into the day have shut down activity in Burundi’s capital, Bujumbura, amid turmoil over President Pierre Nkurunziza’s extended term in office.

Only military and police vehicles are patrolling the city center and road blocks have been set up, residents Karikurubu Pie and Jean de Dieu Rugira said Friday.

Military sources, who insisted on anonymity because they are not authorized to speak with the media, said that at least one army camp was attacked in the night.

Nkurunziza won elections in July for a third term in office that opponents say is illegal. At least 240 people have been killed since April when Nkurunziza’s candidacy was announced. The international community warns that Burundi could slide into chaos if the killings continue.