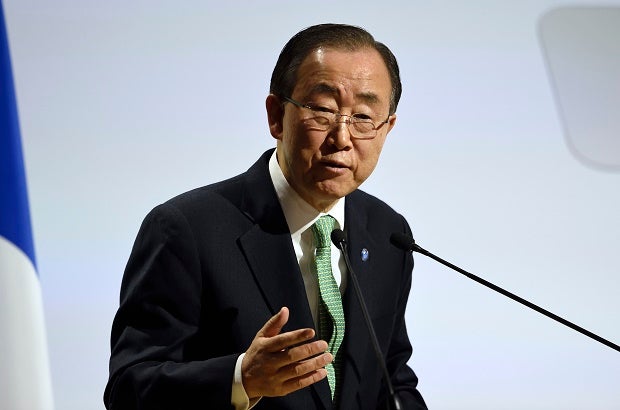 UNITED NATIONS, United States—UN Secretary-General Ban Ki-moon said Monday that deploying peacekeepers to Burundi was an option to quell the violence but recommended that a UN team be first sent to help bolster dialogue.

Ban laid out three options to address the crisis in a letter to the UN Security Council, which has adopted a resolution calling for measures to prevent mass atrocities in Burundi.

Among those options was setting up a special political mission to monitor human rights, support dialogue and lay the groundwork for a possible peacekeeping operation.

Citing “existing political realities” and security concerns, Ban however shied away from recommending the deployment of a full-fledged peacekeeping operation or a political mission.

He put forward a third option—a UN support team—that would work with the Bujumbura government to shore up a dialogue with the opposition.

“Violence in Burundi has reached alarming levels,” Ban said in the letter to the 15-member council.

Launching a dialogue “must be the absolute priority while we continue to find ways, with our partners in the region, to stop the deterioration of the security situation and prevent massive violence and a possible full-blown war.”

Burundi descended into violence in April after President Pierre Nkurunziza launched a bid to prolong his term in office and later won elections that UN observers said were neither credible nor free.

At least 240 people have died the conflict and more than 200,000 have fled the country.

British Ambassador Matthew Rycroft, who chairs the council this month, said sending a support team was not a “new step” and that debate would now turn to the other two options.

A UN support team “is the base line that is already there,” he said, adding that discussion would focus on steps “on top of that.”

UN officials are drawing up plans including rushing UN peacekeepers from the Democratic Republic of Congo to Burundi, or deploying a regional force under the African Union, if the violence spirals out of control.

In the latest outbreak of violence, gunmen late Sunday opened fire on a bar in Bujumbura, killing an army major and wounding the husband of the senate’s deputy speaker.

Ten civil society organizations that led the movement against Nkurunziza’s re-election bid have been shut down and there has been a worrying rise in hate speech.

UN envoy Jamal Benomar told reporters after a meeting behind closed doors with the Security Council that the UN team would be sent quickly to Bujumbura to press for a political solution.

Council envoys are considering a trip to Bujumbura to encourage political talks and to press the government to step back from the brink of major bloodshed.

Read Next
Pope visits Africa mosque, urges peace among Christians, Muslims
EDITORS' PICK
Metro Manila’s COVID-19 cases on downward trend, but surge not over — OCTA
House energy committee chair Arroyo bats for cheap electricity
Unleash the photographer in you this World Photography Day with vivo smartphones
Look Through: The fate of impounded stray dogs
Palace warns sugar hoarders after raid on Pampanga warehouse
What to watch out for when selecting a video surveillance solution
MOST READ
LOOK: Miel Pangilinan dazzles in glittery pre-debut shoot
DOJ indicts bank officer in $2.1 billion Wirecard fiasco
PNP bars US legislators’ visit to De Lima due to lack of authority from court
Palace warns sugar hoarders after raid on Pampanga warehouse
Don't miss out on the latest news and information.