Escudero: SC justices’ inhibition from cases must be ‘voluntary’ 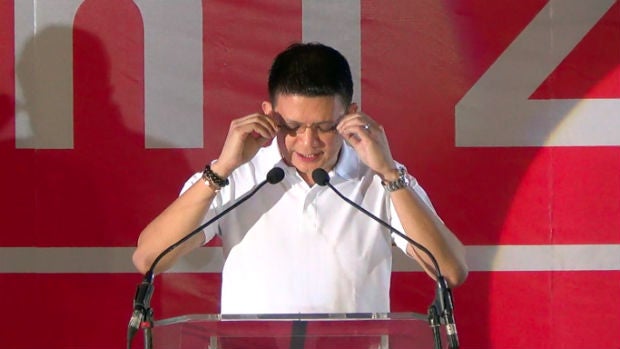 The inhibition of two associate justices of the Supreme Court being linked to presidential aspirant Davao City Mayor Rodrigo Duterte from cases involving him or his rivals in the 2016 elections should be a voluntary act since no higher court cannot compel them anyway, Senator Francis Escudero said on Thursday.

Although he refused to comment on the reported attempts by Associate Justices Jose Catral Mendoza and Bienvenido Reyes to convince another presidential aspirant Roy Señeres to withdraw from the race, Escudero said that at the end of the day, the magistrates are also voters like the President.

The senator said the justices’ reported link to Duterte might only become an issue if there are cases involving the mayor that would be brought to the Supreme Court.

READ: 2 SC justices told: Back off DQ cases if ties with Duterte proven

However, if a case would benefit Duterte, Escudero said it would be up to the lawyers involved in the case whether or not to seek the inhibition of the concerned justices.

(The lawyer will study on that if it will be requested. However, for me, the inhibition especially that of the magistrates of the court is a sensitive issue because there is no higher court that can force them to inhibit. So at the end of the day, whether the magistrate inhibits or not is voluntary on his part.)

(However, on the part of the magistrates of the Supreme Court, it’s purely voluntary on their part that’s why if you notice, I have been really careful about that.)

Escudero, running mate of Senator Grace Poe in the 2016 elections, also pointed out that when the Senate Electoral Tribunal was hearing a petition seeking to unseat Poe in the Senate, they did not question the participation of one of its members, Senator Nancy Binay, who voted in favor of the petition.

He said, however, they expected that Binay would do the right thing because the latter is the daughter of Poe’s rival, Vice President Jejomar Binay.

(However, she did not do what we thought was right and appropriate.) RAM