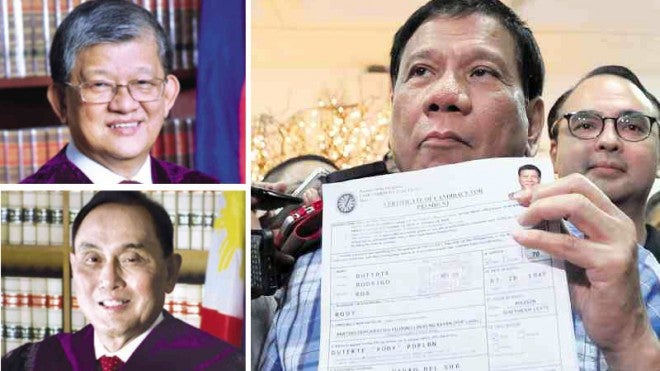 FRATERNITY TIES Justices Jose C. Mendoza (upper left) and Bienvenido L. Reyes have reportedly urged presidential candidate Roy Señeres to back out and give way to Davao City Mayor Rodrigo Duterte, who went to the Commission on Elections in Manila Tuesday to “reaffirm” his candidacy for President. MARIANNE BERMUDEZ PHOTOS FROM SC.JUDICIARY.GOV.PH

AT AN exclusive meeting of the San Beda College fraternity Lex Talionis, two associate justices of the Supreme Court had attempted to coax presidential aspirant Roy Señeres, a founding member, to withdraw in favor of his “brod,” Davao City Mayor Rodrigo Duterte, who is likewise seeking the presidency, the Inquirer has learned.

A source present during the event on Friday identified the two magistrates as Justice Jose Catral Mendoza and Justice Bienvenido Reyes, both San Beda law graduates.

The reported position of the justices on the candidacy of Duterte has raised concern among legal eagles as critical qualification issues are likely to reach the Supreme Court. “Members of the judiciary cannot engage in any partisan activity,” said former Justice Secretary Leila de Lima, who is running for senator under the administration Liberal Party ticket.

Señeres, an overseas Filipino worker (OFW) representative, confirmed the meeting at Milky Way restaurant on Pasay Road in Makati City. He said it was a luncheon gathering of “prominent members” of the fraternity which he cofounded while studying law at San Beda in 1969.

He refused to name those who attended the meeting, but an Inquirer source said that in addition to Señeres, also present were former Commission on Elections Chair Sixto Brillantes Jr., and prominent political lawyer Vitaliano Aguirre.

Mendoza, a founding leader of Lex Talionis, is currently a member of the Troika, the fraternity’s highest governing body.

Reyes, Aguirre and Duterte are members of Lex Talionis, Señeres said, while Brillantes was their professor.

Duterte, along with Joel Babista and Albert Sipaco, would later form the Lex Talionis chapter at Ateneo de Davao in 1974. Duterte, Babista and Sipaco are called “The Triumvirate.” Sipaco became a regional director of the Commission on Human Rights. Babista is a Davao businessman.

Señeres said he was asked “in a very polite manner” to withdraw his certificate of candidacy (COC), and give way to his brod Duterte. “I declined. I said I’m prolife, he is prodeath,” Señeres said in an interview on Monday night.

Señeres said one of those present at the meeting even called him the next day, hoping that had changed his mind. “He even said, Why, are you sure you will win?”

Señeres said efforts to convince him to give way to his fraternity brod continued on Tuesday.

He said the calls and text messages contained requests for him to “reconsider for the sake of country and brotherhood.”

After so much waffling, Duterte Tuesday belatedly filed his COC as a substitute candidate of Partido Demokratikong Pilipino-Laban ng Bayan (PDP-Laban), when Martin Diño, its purported standard-bearer, withdrew amid claims he was among the 100 “nuisance” candidates for President in the 2016 general elections.

Duterte had filed for reelection as Davao City mayor, but decided to join the presidential race after Sen. Grace Poe, a foundling, won a Senate Electoral Tribunal vote, nixing a Constitutional mandate that that requires a President to be a natural-born Filipino.

However, Diño’s COC has since been questioned after it was discovered that he had written down “mayor of Pasay City” in the space in the document for the position he was seeking, an error that would likely have to be resolved by the Supreme Court.

Señeres said his COC was in order. He stressed that he complied with the Comelec mandated schedule on the filing of COC from Oct. 12 to 16. “I was not asked to explain why I should not be declared a nuisance candidate, so I’m good,” he also said.

His son, Christian, who is also a representative for the Cibac party-list group, also warned him about backing out. “Never do that, people will ba talking about it years from now,” Señeres said, quoting his son.

The Philippine ambassador to the United Arab Emirates in 1990s, and labor attaché to the UAE from 1983 to 1989, Señeres cited the millions of OFWs, contractual workers of the private sector and the ‘job order employees’ in government agencies as his “solid base.”

“Who will take up the cudgels for them?” he said. With a report from Nancy C. Carvajal