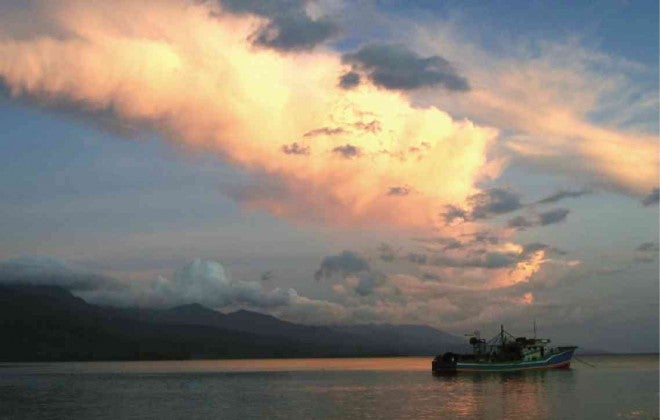 PANDAN, a northern town in Antique province, is known for its pristine rivers and forests, rich fishing grounds and the scenic Panday Bay. Petron Corp. plans to build an oil depot in one the coastal villages, raising fears of environmentalists. NESTOR P. BURGOS JR./INQUIRER VISAYAS

PANDAN, a town in northern Antique province and near the world-famous Boracay Island in neighboring Aklan province, is striving to become an alternative tourist destination for its pristine rivers and beaches, rich fishing grounds and lush forests.

But a P500-million oil depot being planned by one of the country’s largest corporations along the Pandan Bay, considered a fish sanctuary, has been dividing its residents on the course that the town should take toward progress.

“We cannot create that many jobs through fishing and agriculture alone for our increasing population. We need major investments to raise the standard of living of our people,” he says.

But critics, mostly environmentalists, say the oil depot could put at risk Pandan’s rich and diverse ecosystem and marine reserves near the site. Many of the 32,000 residents depend on the Pandan Bay for their livelihood.

Petron Corp., which is owned by food and beverage giant San Miguel Corp. (SMC), plans to put up the fuel storage plant in a 1.6-hectare property in Sitio Calabanog in Barangay Idiacacan. The facility will include a 300-meter pier, access road and 2,200-square-meter parking area.

The depot will store aviation fuel for the Godofredo P. Ramos Airport (Caticlan Airport), which is currently undergoing major renovation to allow bigger jets and night operations to serve more tourists bound for Boracay. The airport, situated 31 kilometers away in Barangay Caticlan in Malay, Aklan, is being operated by TransAire Development Holdings Corp., a subsidiary of SMC.

But the proposed facility has drawn protests from several municipal officials, residents and environmental advocates. They fear that possible oil spills, fires and other accidents may ignite a major environmental disaster that will adversely affect the community.

The Pandan Bay connects to the four-kilometer Bugang River, which has received various national and international awards for being among the cleanest and protected waterways in the Philippines.

The citations include the Hall of Fame award for being the government’s “Cleanest Inland Body of Water” and a Green Environment Apple Award under an annual international campaign of the United Kingdom-based The Green Organization to recognize and promote environmental best practices.

Councilor Raymund Gumboc, one of the three municipal council members who are against the planned oil depot, says the site is categorized as rice land and is along the coast of the Bay. It is near 20 marine sanctuaries that have been established in the coastal municipalities of Libertad, Pandan, Sebaste and Culasi, he says.

While acknowledging that the project will benefit the host-municipality, it will also pose a threat to its ecology and tourist attractions, Gumboc told the Inquirer in a recent interview. “We should gear for development that protects and enhances our natural resources,” he said.

When reached for comment, Petron simply issued a one-line statement: “Petron is exploring ideal locations in Antique to ensure sustainable operations for its depot and to maximize all economic opportunities for the province and all stakeholders.” 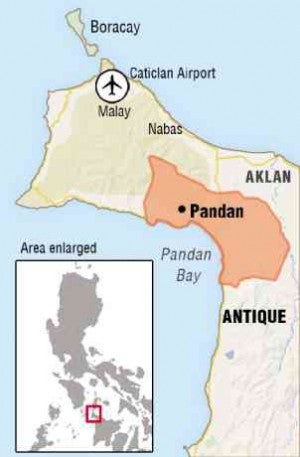 Mayor Tan, who is seeking reelection in next year’s elections, has dismissed objections to the project as the handiwork of the political opposition in his municipality and “a few who are not from Pandan or do not reside here.” While there are risks, modern technology and safety measures will prevent accidents, he says.

He denies that the project site is near a marine sanctuary. “Do you think San Miguel Corp. will risk its investments by putting up unsafe facilities?” he asks.

Tan challenges critics to offer an alternative project that will provide the same economic opportunities as those offered by SMC and Petron.

He points out that the oil depot is just the start of SMC’s multibillion-peso investments in the municipality, which, he adds, could generate at least 1,000 jobs. The company also intends to establish a cold storage facility, warehouse and processing plant.

Petron has already put up a P40-million passenger terminal in Pandan and has extended scholarship grants amounting to P3 million for the past two years, according to Tan.

The Save Pandan Bay From Petron Gas Depot Coalition has initiated an online petition against the project (https://www.change.org/p/petron-corporation-denr-stop-construction-of-gas-depot-in-pandan-bay?source_location=trending_petitions_home_page&algorithm=curated_trending).

The petition is supported by the Save Antique Movement, No to Mining in Antique and Panay Island, Pagtatap Foundation and The Climate Reality Project Philippines, had so far drawn 1,034 supporters as of Dec. 2.

Opponents of the project have submitted another petition to the regional office of the Environmental Management Bureau, an agency under the Department of Environment and Natural Resources, after the municipal council approved a resolution of endorsement on Sept. 23 by a vote of 6-3.

Tan claims that most residents have already voiced support for the project, citing the endorsement of barangay officials and the Municipal Development Council and during a public consultation meeting in Barangay Idiacacan.

Critics, however, have questioned the conduct of the consultation in Idiacacan. Only the side of the oil depot proponents and supporters was heard in the meeting, Gumboc says, while members of the municipal council, including those against the project, had not been able to attend and participate because it was held simultaneously with the council’s regular session in another village.

Gumboc says the succeeding public consultation was held at the public plaza but, he points out, that it failed to provide an avenue to comprehensively discuss the pros and cons of the project due to limited time.

The oppositors are hoping that “genuine and transparent” consultations and widespread discussions on the project will be conducted. After all, they assert that what’s at stake is the future of Pandan—not just its people but also its environment.

In Manila, Sen. Loren Legarda, said the oil depot project “must go through the most stringent review,” noting that it involves oil, considered a heavy industry and making it “environmentally critical.”

In a statement, Legarda, chair of the Senate committee on climate change, noted that the site “is an environmentally critical area” as the Pandan Bay is lined with established marine sanctuaries.

“We have to ensure that there is consideration of environmental and social concerns and that the affected communities have been properly consulted and agree to the project. Always, we must strike a balance between the growth of private industry and environmental protection,” she said.