LOOK: Innovative ways to save the planet showcased at Solutions21 | Inquirer News

LOOK: Innovative ways to save the planet showcased at Solutions21 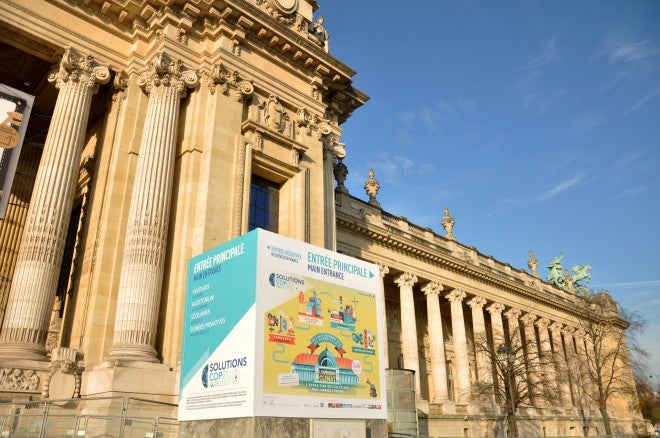 The Grand Palais in Paris, France is venue for Solutions21, an initiative by French business and civil society groups aimed at encouraging the public to save the planet from climate change. PHOTOS BY SARA ISABELLE PACIA

PARIS—Beyond the historic climate change talks being held just outside this city, business groups and civil society are engaging the public to save the planet using an interactive mix of art and technology.

Called Solutions21, the weeklong convention at the Grand Palais is among the events organized by the French simultaneous with the 21st Conference of Parties (COP21), which aims to ink a legally binding agreement to reduce greenhouse gas emissions.

Art for the planet

One booth lined its walls with letters from attendees, who were asked how they could contribute to a greener planet. In multiple languages, the messages began with, “In my imagination, I contribute to a less polluted planet.” 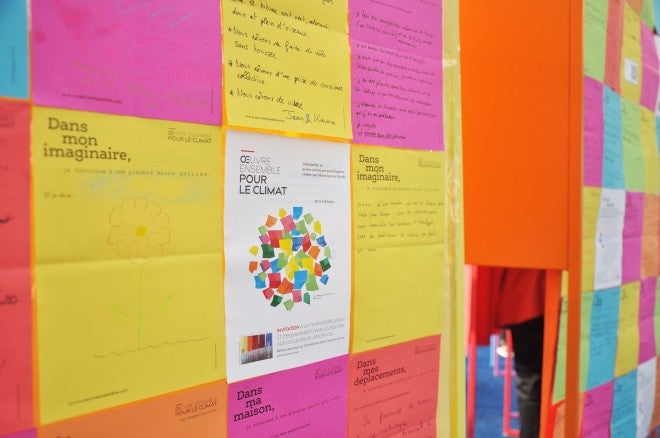 In another area of the convention, Artist Alexis Tricoire elevated the audience’s viewing experience by showing his minute-long film on NASA data inside a hut made of plants.

At the Art of Change 21 booth, lining the walls were photographs of people from around the world wearing creative face masks made of various art materials. The project, titled Maskbook, is one way the organization wants to involve China–where face masks are prevalent–in the climate change solution. 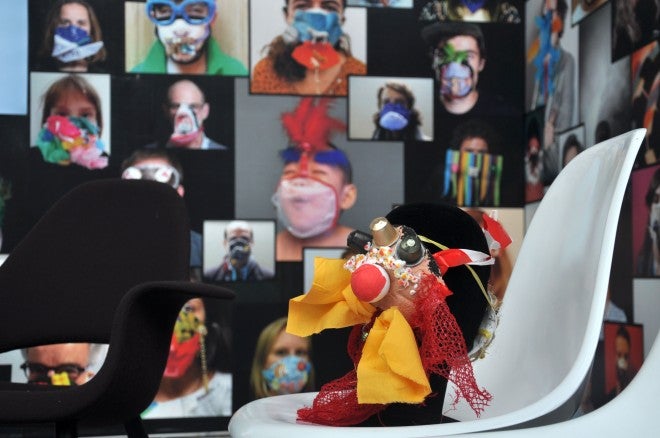 Some booths encouraged participants to break a sweat for climate change.

On one side of the venue, electric utility company Engie invited attendees to bike for five minutes on a pedal attached to a table and chair. For every five minutes of cycling, the multinational group promised to donate a light bulb to a child in Africa. 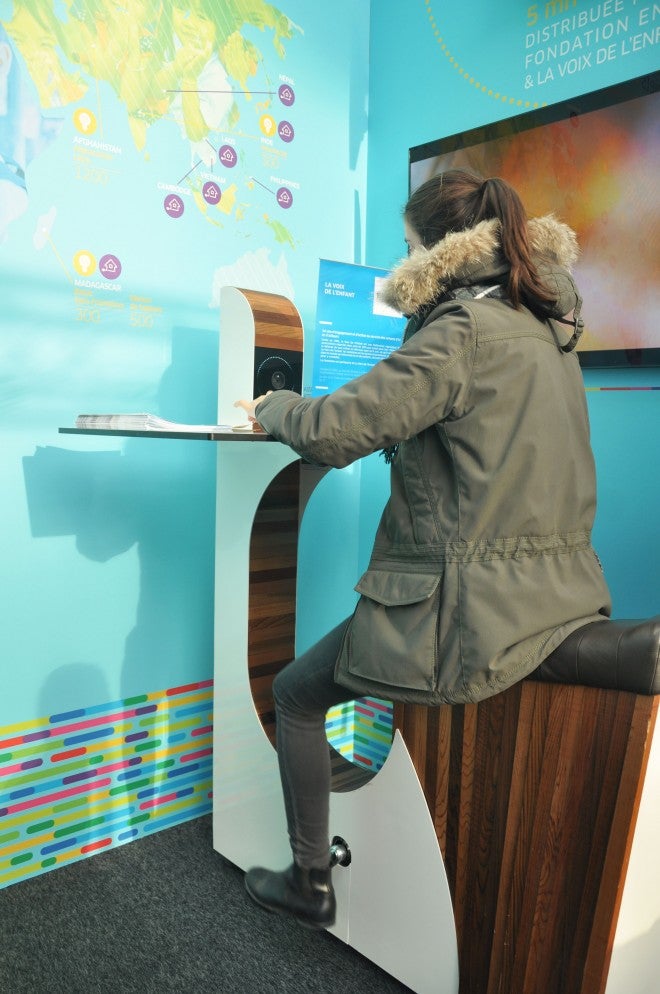 On the other side, water and waste management company Veolia built a small maze titled “Voyage to the land of +2 degrees Celsius.” Inside, attendees could walk through screens, posters and other interactive elements depicting  how segregating trash could contribute to saving the planet.

“If we do not act for the climate today, we will be living in a world of +4 degrees Celsius today,” Veolia wrote on one side of its maze.

Technology for a greener planet

But more than art and elaborate booths, many of the companies and groups mainly used technology to send the message.

Game development company Pixel Carré created for Solutions 21 an interactive puzzle where players completed levels by matching colored blocks signifying the journey toward greener living. One level, for example, has players building a path between a coal power plant and a wind turbine. 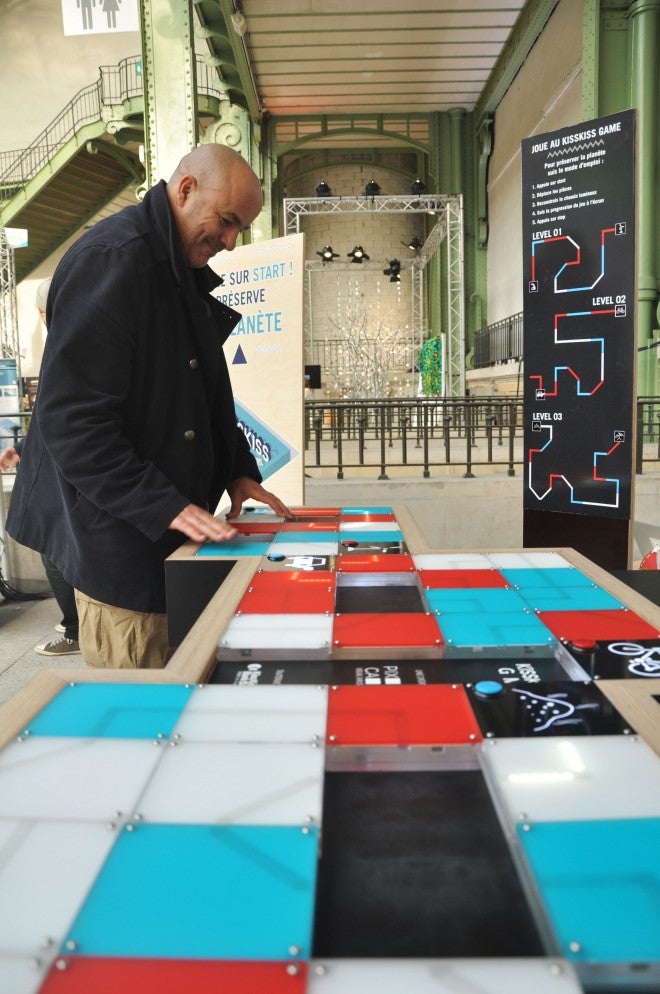 French supermarket chain Picard used an Oculus to showcase how its stores had shifted to green energy to run its refrigerators and lights. 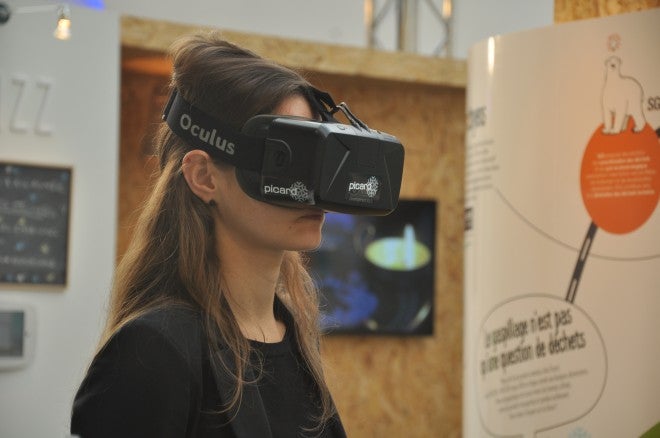 Mineral water brands Evian and Volvic shared a booth called “Created by nature, protected by man” where attendees could “slowly experience” in eight minutes how water is bottled and consumed via a film by Jérome Bouvier. The short documentary carrying the same name as the booth could be viewed using an eye device connected to a smartphone. 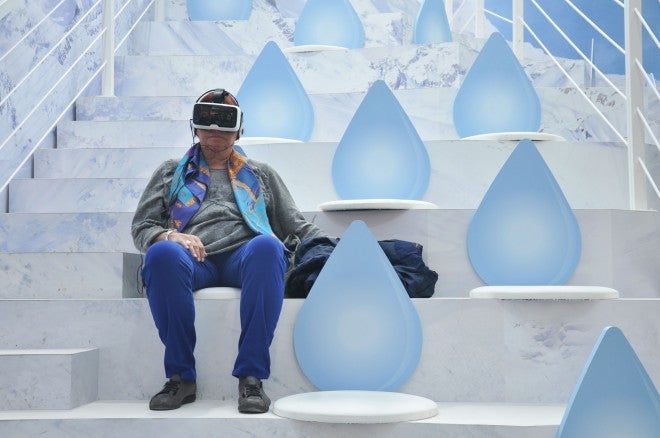 Solutions 21 is organised by Comite 21 and Club France Developpement Durable. It is open to the public free of charge from Dec. 4 to 10, 2015.

These images may be the most moving from Paris COP 21

LOOK: Climate-friendly products given away at COP 21 in Paris