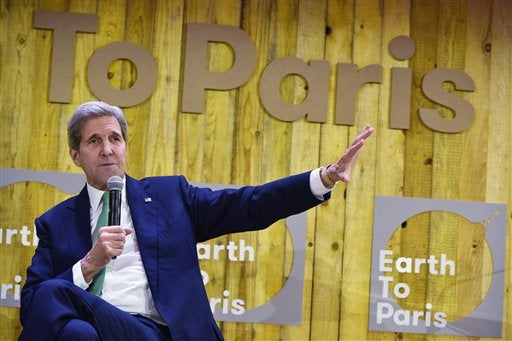 US Secretary of State John Kerry speaks at the Mashable/UN Foundation “Earth to Paris” summit at Le Petit Palais in Paris, France, on the sidelines of the COP21, the UN climate change conference, Monday, Dec. 7, 2015. AP

LE BOURGET, France — The United Nations secretary-general called for a clean energy revolution to avoid a “climate catastrophe” as talks on a global warming pact entered their final week Monday with crunch issues on money and burden-sharing yet to be resolved.

One of them, however, appeared to be untangling as the European Union softened its insistence that countries’ targets to limit carbon pollution need to be legally binding, something US negotiators reject because of opposition in the Republican-controlled Congress.

“We need the United States on board and we have to find a solution,” EU Climate Commissioner Miguel Arias Canete told reporters on the sidelines of the conference. “We understand the concerns they have because of the political situation they have in the Congress.”

Many Republicans question whether climate change is happening and oppose emissions limits out of concern that it would hurt US industry and jobs.

Upon arrival in France, US Secretary of State John Kerry said that even without binding targets the deal could change the way world business thinks about energy.

“I have absolute confidence in the ability of capital to move where the signal of the marketplace says ‘go’ after Paris,” he said.

Warning that “the clock is ticking toward climate catastrophe,” UN Secretary-General Ban Ki-moon told ministers the world expects more from them than “half-measures.”

“Your work here this week can help eradicate poverty, spark a clean energy revolution and provide jobs, opportunities and hope for tomorrow,” he said.

Touching on the sensitive issue of who should do what, Ban said wealthy nations must agree to lead, while “developing countries need to assume increasing responsibility in line with their capabilities.”

The Paris conference is the 21st time world governments have met to seek a joint solution to climate change — and is aiming at the most ambitious, long-lasting accord yet.

The talks are focused on reducing emissions of carbon dioxide and other greenhouse gases, primarily by shifting from oil, coal and gas to cleaner sources of energy.

Fossil fuels still meet about 80 percent of the world’s energy demand, though the share of renewable energy including hydro, solar and wind power is growing, particularly in electricity generation.

India and other major developing countries insist on their right to use some fossil fuels to advance their economies — just like Western nations have done since the Industrial Revolution. They argue the West therefore is historically responsible for raising levels of carbon dioxide in the atmosphere.

“India is here to ensure that rich countries pay back their debt for overdraft that they have drawn on the carbon space,” Indian Environment Minister Prakash Javadekar said.

The Paris agreement would be the first to ask all countries to rein in their emissions; earlier pacts only required wealthy nations to do so. How to define countries’ evolving responsibilities as their economies grow is the biggest challenge in the Paris talks.

Another major issue is helping the poorest and most vulnerable countries cope with dangerous warming effects, from rising seas to intensifying droughts and heat waves. The U.S. and other developed countries say it’s time that the most advanced developing countries pitch in.

Many of them, including China, have done so but they want any Paris deal to clearly state that their contributions would be voluntary, rather than something that should be expected of them.

China, the world’s biggest carbon polluter, has domestic reasons to act. On Monday, Beijing issued its first ever red alert for smog, urging schools to close and invoking restrictions on factories and traffic.

While smog is a different environmental problem, much of it is blamed on coal-fired power plants and vehicle emissions, which also are key sources of carbon emissions.

Meanwhile, a surprising new study suggested global carbon dioxide emissions may be dropping ever so slightly this year.

The unexpected dip could either be a temporary blip or true hope that the world is about to turn the corner on carbon pollution as climate talks continue in Paris, said the authors of a study published Monday in the journal Nature Climate Change.

US climate envoy Todd Stern said those findings had not made an impact on the negotiations.

“People are pretty focused on the business at hand,” he said.

More than 180 countries have already presented national pledges for reining in carbon emissions after 2020, when the Paris deal would take effect. But scientific analyses show that won’t be enough to meet the international goal of limiting warming to 2 degrees C (3.6 degrees F), compared to pre-industrial times.

Many countries have called for a review of all targets within five years to see if there are ways of ramping them up. The draft, however, sets 2024 as the earliest date of such a reappraisal.

Tuvalu Prime Minister Enela warned that his island nation and others face potential extinction if temperatures continue to rise.

“Let’s achieve a legally binding agreement,” he said. “Let’s do it for Tuvalu. If we save Tuvalu, we save the world.”

UN climate chief Christiana Figueres said she’s kept up at night by a vision of “the eyes of seven generations beyond me asking me, ‘What did you do?’

“The same question will be asked of each of you,” Figueres told the ministers. “May we all be able to stand tall and clearly say, we did everything that was necessary.” TVJ